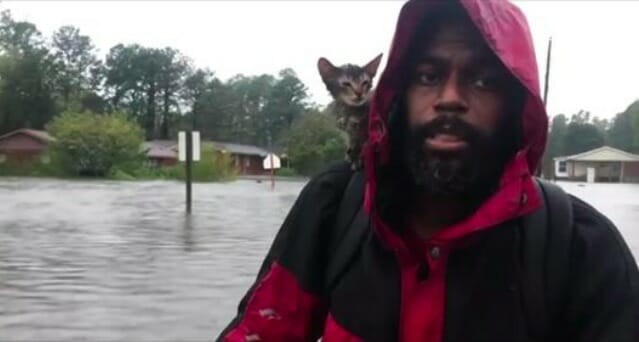 Hurricane Florence has taken a toll on North Carolina, with at least 32 lives so far lost, according to CBS News.

For residents in the area, hurricanes and tropical storms are no strangers. Loads of residents have shown up to help others in need, scouring neighborhoods in assistance.

One such individual is Robert Simmons Jr., who has lived in the area for 40 years. But the help he ultimately provided turned out to be a little different than what he first expected.

Robert from New Bern, North Carolina, can remember at least four hurricanes in his lifetime, but says Hurricane Florence is the worst he’s ever seen.

“Never seen it like this. Not right here in this area. It’s bad,” he said, adding that what pains him most is to witness the devastation caused to his area.

Thankfully, Robert’s own home hadn’t suffered too much from the storm or flooding, with the water stopping right at his front door.

Regardless, Robert left his dad behind, who insisted on staying put, to make the trek out to dryer lands.

But while on his way out, Robert encountered a tiny, helpless life. A small kitten, shaking and drenched with water.

KITTEN CLINGS FOR LIFE AS MAN AWAITS RESCUE FROM FLORENCE. THE CAT’S NAME SAYS IT ALL.From his seat on the back of a…

Posted by The Putnam Way on Saturday, 15 September 2018

He didn’t hesitate. He scooped the tiny tabby kitten up and decided to make it his companion out of town to safe grounds.

Meet Robert Simmons. He escaped his neighborhood with his kitten hugging his neck. Here's the story behind this photo.https://t.co/1glAFEQVl2#HurricaneFlorence #hurricaneflorence2018 #kitten pic.twitter.com/nkTC3uIFdc

What a sweet rescue. No kitten animal or human of course should ever be left behind in times of need and crisis. I’m so glad these two found each other at such an opportune time.

Share this sweet story if you do too and to thank Robert for his small act of compassion that will likely go a long way for this tiny life.