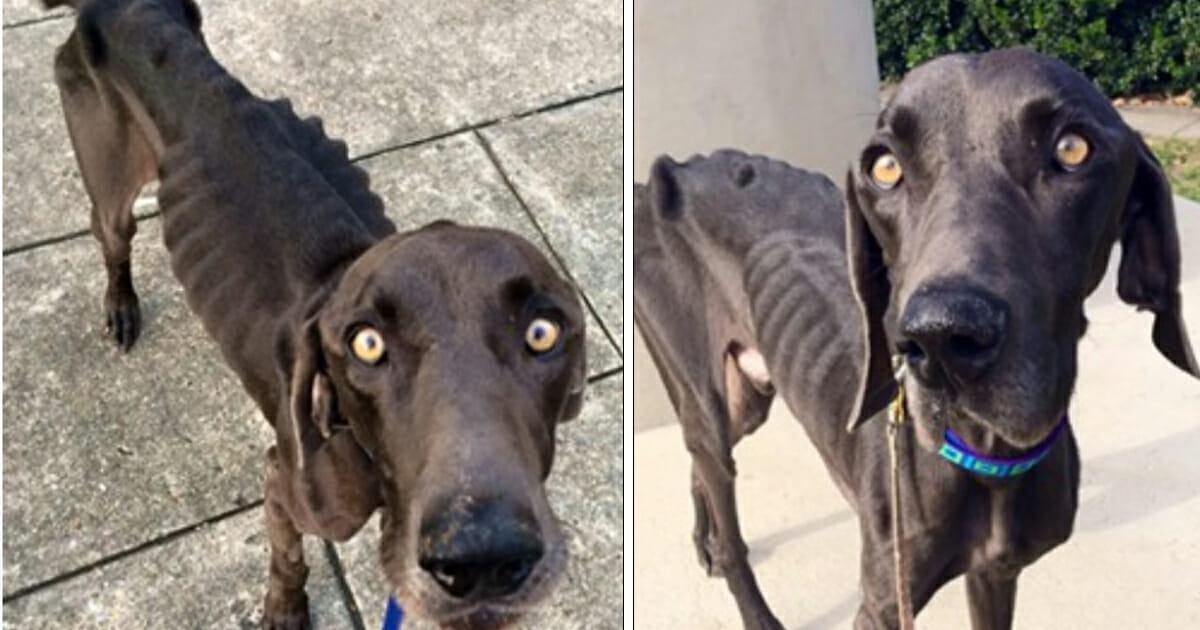 Nothing quite makes my heart bleed like seeing photos of beaten, abused or starved animals.

Perhaps it’s because I have a dog of my own, but I have a particular affinity when it comes to helping canines in need. That could be why I found this story so gut-wrenching, and it’s conclusion so triumphantly brilliant.

It concerns a Weimaraner whose picture appeared on a parish animal control page in Louisiana. The dog, named Alex, looked to be literally starving to death, and it was only by the grace of several animal lovers that people were made aware of the issue.

Alex was found and taken in by the only no-kill dog shelter in New Orleans, the Southern Animal Foundation (SAF). The foundation’s assistant director, Deanna Theis, believed she’d seen everything before he limped in the door.

Speaking to WVUE in New Orleans, Theis said: “Severe neglect and starvation, that’s what we saw in the picture. It was a terrified emaciated dog that needed help fast.”

When Alex was first brought to the shelter, Theis and her coworkers thought it a miracle he hadn’t already died.

“How he [was] still alive at this point [was] pretty much a miracle,” she said, “he was extremely close to death. If they’re not pulled by rescues they’re euthanized.”

Fortunately, the foundation wasn’t prepared to give up on Alex. They put him on a controlled diet to restore his strength and build his weight. After just 24 hours he’d already gained 2 pounds.

Yet there was more sadness to come. The foundation gave Alex a medical examination that included X-rays of his insides. It turned out the Weimaraner had been surviving on sticks and rocks as he fought to stay alive.

Alex underwent surgery to rid his stomach of the accumulated debris, before the focus on building his weight resumed.

Alex isn't sure what all the fuss is about, but he's enjoying the attention he's getting when he's out for a walk. He's…

11/13 Alex update! Alex had a busy afternoon in a photo-shoot! Local photographer (and SAF client/adopter/volunteer)…

It should go without saying that Alex’s story quickly garnered plenty of attention. People saw the images of the miracle dog who had survived against the odds, and in turn he helped the SAF too, by way of raising money and awareness as to their efforts.

Finally the day came for Alex to be adopted into his forever home. Having been nursed back to health, and having proven himself a kind boy who only wanted to be loved, Alex moved in with Diane Lundeen, a woman who already owned two Weimaraners.

“He has good color in his gums, his eyes are bright, when he goes to sit down he doesn’t whine. He has this incredible joy for life that’s awesome,” his proud mother said, as per Doggies Care.

It's a happy (and somewhat sad) day at SAF! Alex, weighing in at 68 lbs, left with his new foster mom today! If all…

Alex foster home update: Alex discovered snow while on his Christmas vacation to the midwest. He sniffed it tentatively…

We have a soft spot in our hearts for all animals, but Alex’s rags to riches story is one that really resonates beyond the norm.

Please share this article if you think all dogs deserve a second chance in life, and to help us raise awareness of problems that certainly still exist.