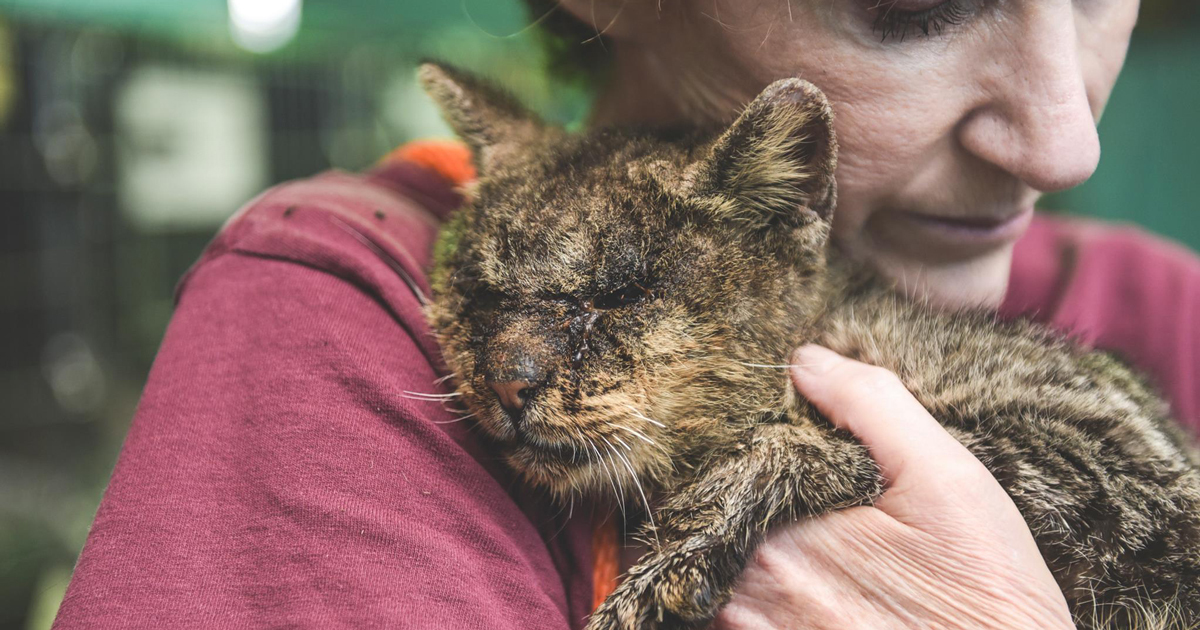 Valentino was one of those cats that no one wanted to get near. His fur was grimy, his eyes were caked shut, and he had a serious skin infection.

But what Valentino needed more than anything was some love and affection.

So luckily, an animal lover named Elaine Seamans noticed Valentino and was able to look past his appearance and see what he yearned for in his heart.

Now, pictures of Elaine hugging Valentino are melting hearts all around the world.

When Valentino was rescued from the streets, he was in a terrible state. He was thin as a rail. He suffered from a skin infection called sarcoptic mange. And his eyes were so swollen, he could barely open them.

Because Valentino looked so scary, no one wanted to touch him. He sat alone in his cage and had no human contact. Until Elaine Seamans came to visit.

When Elaine passed Valentino’s cage at the Baldwin Park animal shelter, she stopped in her tracks. She heard the cat whimper for help and couldn’t help but open the cage and take him out.

“He reached out with his little paw and made the tiniest meow. It was like he was screaming without verbalizing it: ‘Please help me,'” Elaine told The Dodo.

Elaine says that she saw no other option than to stay and help Valentino. She picked him up and hugged him without gloves or other protective equipment. Valentino immediately rested his little head on her shoulder.

She continued to hold Valentino in her arms while she picked up the phone and called her friend Toby Wisneski, the founder of Leave No Paws Behind. Toby could hear the cat meowing in the background and agreed to take care of him.

Valentino went home with Toby and was freed from his cage at the animal shelter.

Although he’s in bad shape, Valentino actually has a bright ahead of him. He gets stronger every day and will have a long and happy life when he gets healthy.

Well we finally have Valentino all checked in and settled at ACCESS: Advanced Critical Care Animal Hospital! He is…

“He’s a fighter,” says Toby. “He’s so loving. You can tell he is very grateful. He will purr for them and try to rub up against the veterinary staff. He knows he is safe.”

According to reports, Valentino is now doing well and eating well.

His journey to recovery is going to be a while, but he knows he is safe, loved, receiving the best of medical attention and most importantly, he knows that his life matters.

I’m so moved by the pictures of Valentino and Elaine hugging. Everyone needs love, and Valentino needed it more than ever that day. I hope he gets well soon!

Please share this article if you also were touched by Valentino and Elaine’s pictures.