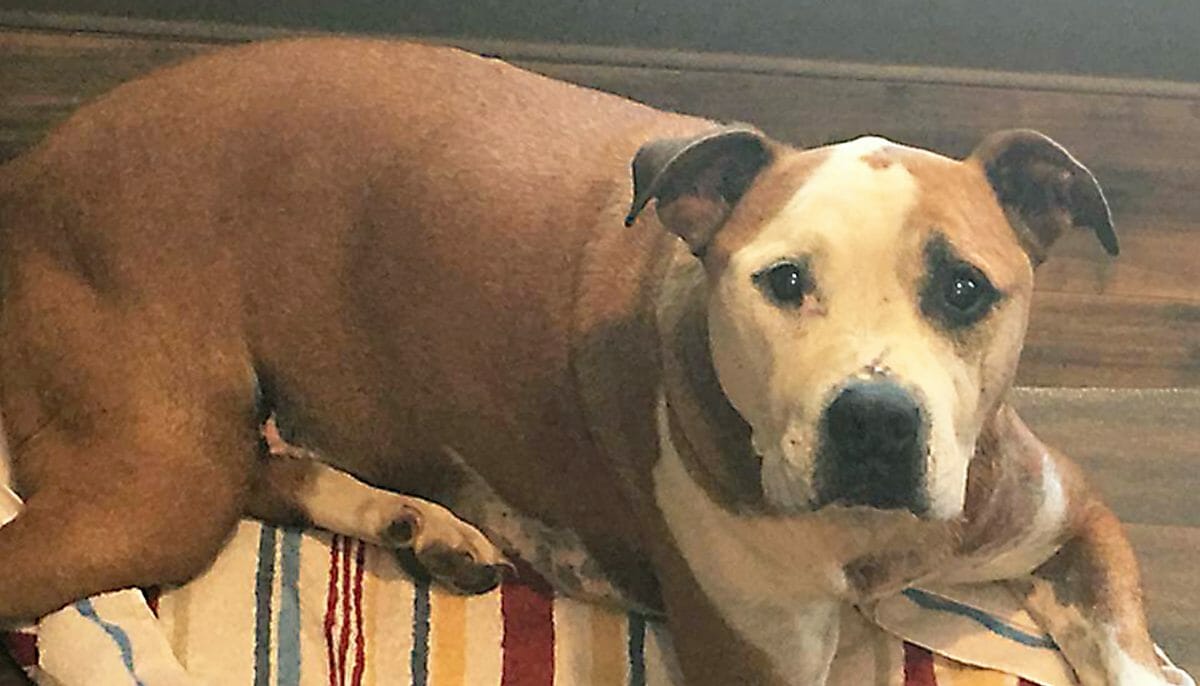 Irrespective of the hard work that goes into righting the wrongs of the issue, there remain far too many dogs across the world abandoned to live their lives on the streets.

There are literally millions of them, either dumped or born without anyone to love them. They toil, they struggle, they do what they need to survive, and often their quality of life is cruelly poor.

And yet, within these dogs is a longing to be loved, a need to be part of a family that they simply haven’t been afforded. It’s why so many of them turn into loyal companions when rescued, and it’s why one pit bull made headlines around the world … for saving a woman as she was being attacked by a man with a knife.

Baldwin, Georgia. A pit bull bearing the telltale signs of a hard life on the streets was on his usual route, when he came across a man in the process of assaulting a woman.

The dog hung back initially, but his instincts kicked in when the man brandished a knife. He threw himself between the assailant and his victim, protecting her from the knife and fighting her attacker back. He was stabbed five times in the process.

Speaking to Inside Edition, Carla Welch of Fighting for the Bullys pit bull rescue explains: “Most pit bulls are really protective.

“They can sense danger.”

This brave street dog had risked his life for a complete stranger, and he was to be rewarded in a most fitting way.

It was Sergeant Timothy Clay and Officer Daniel Seeley who arrived on the scene after a call regarding the incident. They found the dog bleeding heavily from his injuries, and knew they had to make every effort to save his life.

As Officer Clay explained to WATE: “I don’t think we could have let that dog suffer and die. We felt like we needed to get that dog some help after what it had been through.”

The officers were able to locate a vet clinic that agreed to treat the injured pup. No sooner had the police brought him in, however, than did the dog collapse on the operating table. Things looked bleak indeed.

Proving once more than he was a fighter of a most determined kind, the dog pulled through. Days later, he was transported to Welch’s rescue center in Knoxville, Tennessee, over 190 miles away. He’d also been handed a new name: Hero.

“Deputy Seeley and myself are extremely grateful to all of the people involved with helping save Hero’s life,” Sergeant Clay said.

“Unfortunately, we see a lot of bad things, but it’s incidents like this that make you feel great about our job.”

It wasn’t long before Hero’s heroic story got out, turning the once-homeless pupper into an overnight sensation. As per the Daily Mail, Hero was adopted by a Tennessee couple in 2016, and now lives with two other dogs in a happy, loving home.

We’re so happy Hero was able to find the forever home he so obviously deserves. What’s more, we can’t believe the bravery and sheer tenacity he exhibited in saving a woman’s life.

Please share this to show people that stray dogs can be loving dogs too. Adopting is the best thing you can do to give a dog a second chance in life. You can be someone’s hero, too.