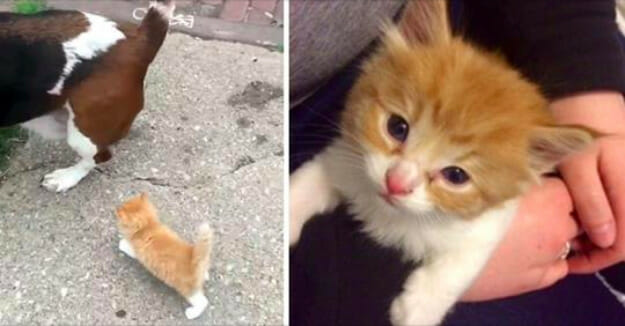 Animals can have personalities as diverse as us humans. Some are friendlier and more affectionate than others — and some, like the kitty in this story, have determination of steel.

Despite its tiny size, this stray kitten proved to show no lack of perseverance after spotting a man walking his dog in her area.

And it certainly paid off.

Jon Nienaber from Cleveland, Ohio, was walking the family basset hound in his neighborhood when along came a tiny ginger stray kitten. It was so small that it could fit into the palm of a hand.

The kitty seemed to immediately decide that they should all hang out. It ran up to Jon and his dog and began to follow them.

“My husband called me and told me he found this adorable little kitten that just seemed like he wanted attention,” Leslie Nienaber told Love Meow. 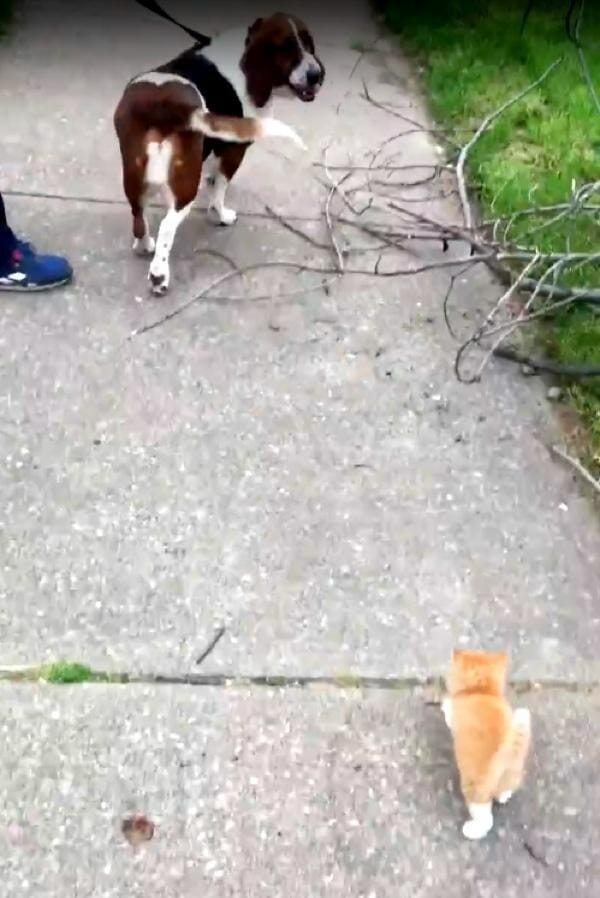 Leslie joined her husband with some cat food in hand and saw what he had told her with her own eyes. This little kitten — who would soon be named Pinot — was simply not giving up.

“He poked his head through a little chain link fence, and he started following Jon and I as we were walking away! He seemed determined to stay with us,” Leslie said. 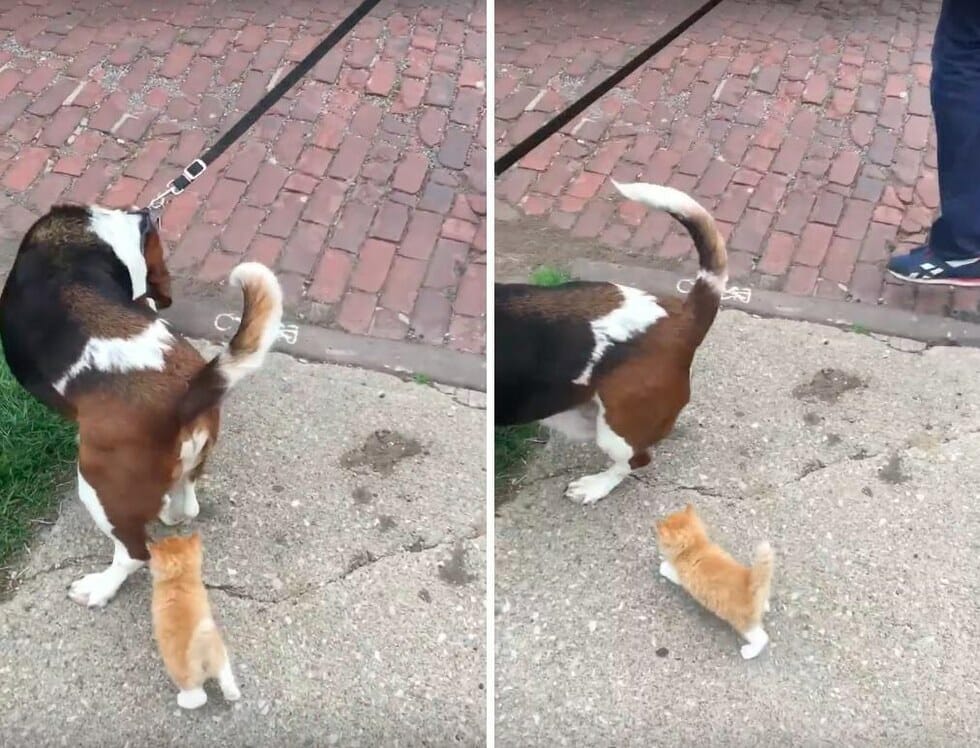 The brave tiny thing followed Jon and Leslie all the way home, playing with their dog and determined to remain by their side. And that’s naturally what happened. Leslie knew they had to take him home.

Leslie and Jon brought him and and cleaned the hungry kitten. The couple already had three cats and a dog of their own, but turned to Leslie’s sister, Sarah, for assistance.

When Sarah heard about the tiny animal’s fierce determination, she knew she wanted him.

“I’ll admit that it was really hard to give Pinot away,” Leslie said. “He was just this brave, determined little soul who wanted to survive, and was the cutest kitten we had ever seen. It made me really happy that my sister took him in, because I knew I’d get to see him grow and I could always visit him.”

Sarah immediately fell in love with little Pinot and immediately took him into her loving care.

“My sister Sarah was seriously an angel. I am convinced that he would have died if we hadn’t brought him home,” Leslie told Love Meow. 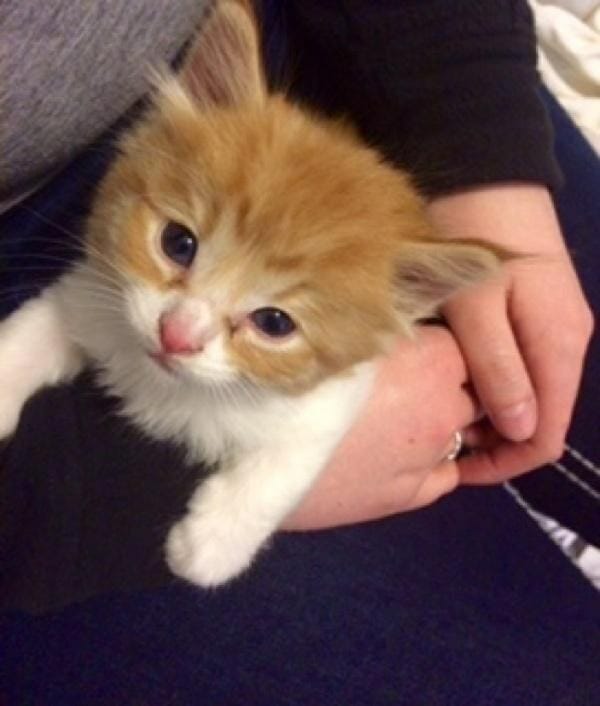 Gradually, it became more and more clear that Pinot was not just incredibly determined, but also very playful.

Just look at him here!

And who needs a bed when you have a perfectly sized shoebox?

Pinot has grown into a healthy and beautiful cat since that lucky day. 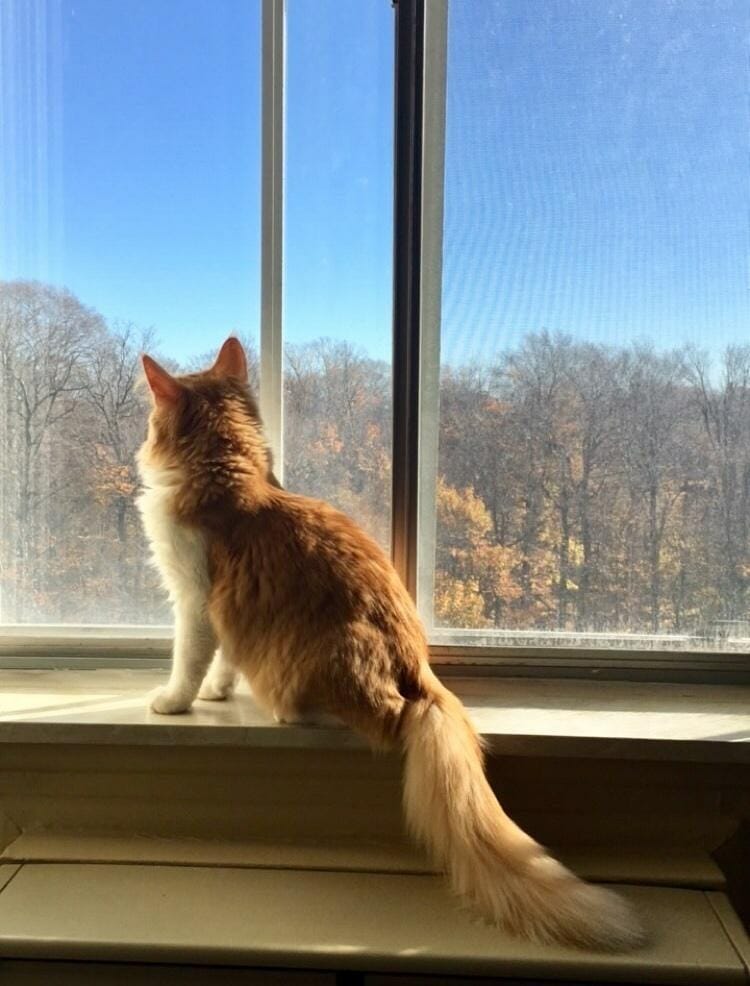 “The vet thinks he has some Main Coon in him,” added Leslie. “He still has some of his ‘street smarts’ and you will often find him hiding around a corner ready to pounce.”

Pinot proved to be extremely curious and extremely smart as well, never missing an opportunity to expose his mischievous character.

Look how beautiful Pinot is now!

Watch the first moments when Pinot decided to join this family forever in the video below.

Such a wonderful story from beginning to end. Share to thank this wonderful family for taking Pinot in and caring for him.