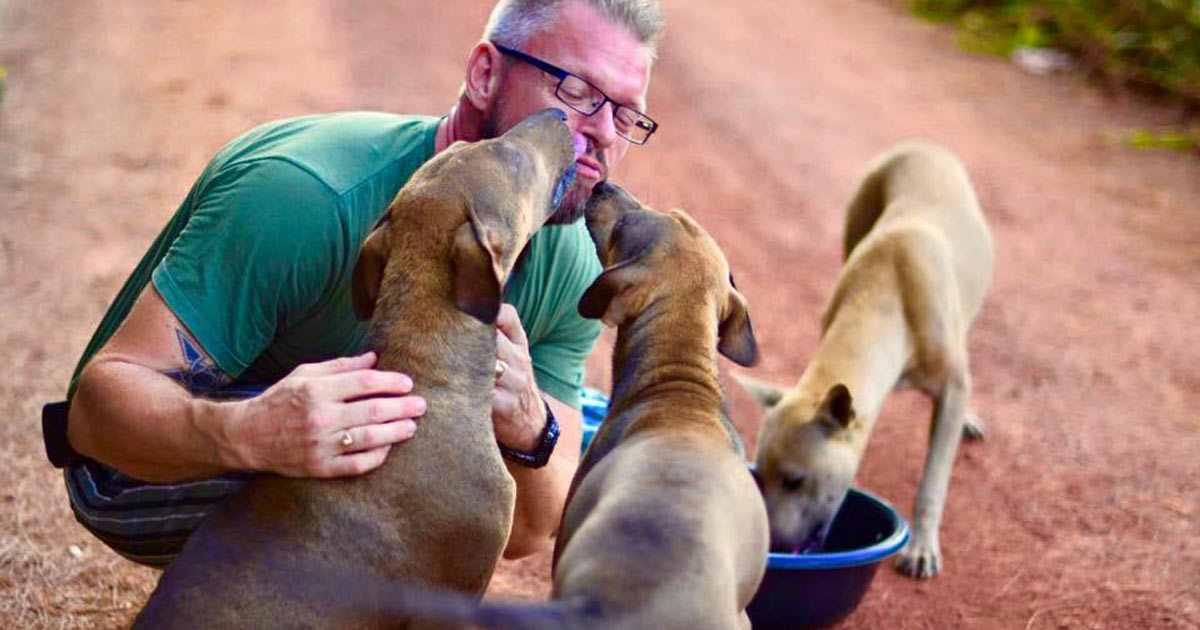 14 years ago Michael J. Baines left his native Sweden to move to Thailand and work in a restaurant. One day, a skinny, malnourished dog came by the restaurant where he worked, carrying brand new puppies– and a bad infection. That day, Michael’s heart broke in half. He began to feed her daily. “And that’s how it all started,” he tells Newsner. “And then it just kept going. I simply could not stand to see dogs in distress.”

It has now been five years since Michael helped that first dog. He now feeds 80 street dogs every day. Throughout the years he also has sterilized around 100 dogs and placed 30 in different homes.

“I pass them every day to and from work while I walk my own dogs, who were all street dogs as well. I just can’t look at them and do nothing,” he says.

Michael feeds the dogs three times a day in various places and times, and is always ready with dog food in his car in case he finds a dog outside his usual areas. He feeds the dogs dry food, rice, oil, steamed fish, chicken, and homemade broth for flavor. He makes sure to feed the dogs from plastic bowls, so that they are not eating off the ground and consuming gravel or debris.

“The dogs that I take care of are doing well, though many still suffer from lack of food or medicine. I mix deworming medicine into their food once a month, so that helps with fighting against heartworms and ticks,” he tells Newsner.

In Thailand, it’s common to see dogs roaming freely on the streets, many having been abandoned by their previous owners.

“Street dogs are not the actual problem in Thailand — it’s people who do not take responsibility for the dogs they own. Those dogs don’t get sterilized, and female are free to mate and so too many puppies are born. Then many people buy puppies because they are cute when they’re babies, but as soon as they grow up and become “too big” and not so cute anymore, they’re dumped on the street.”

Coke is one of the dogs that Michael saved. A motorcycle ran on Coke so his hind legs were paralyzed, but thanks to Michael and his new wheelchair Coke can run again. Source: Facebook

The locals are familiar with Michael’s work and he says most are happy with it.

“I receive many ‘thumbs up’ when they see me. Certainly there are still people who don’t appreciate what I do, but they are very, very few.”

Michael himself has eight dogs at home, all rescued from the street. His work is entirely voluntary, and much comes out of his own pocket to help the dogs. Otherwise, it’s thanks to donations that he can afford to continue.

“I spend about 40 to 50,000 Thai Baht a month (a little over US $1,000), and that is an awful lot of money for me. I get donations from caring people in Thailand, Sweden, Australia, the US and some other countries. However, some months it’s not enough.”

Michael has lived for 14 years in Thailand where much of his time is spent helping street dogs. He would like to see various municipalities in his area do more, such as provide free sterilization for dogs, so they would be fewer. But so far it’s too expensive to do this, and instead dogs multiply in the streets, waiting for someone to take care of them.”

“I think markets and shops that sell puppies should be shut down completely. People who want a dog should head to the street, or shelters. I have a bunch that need a home — and these dogs are free.”

You can read more about Micheal’s amazing work and visit his Facebook page, where you’ll find more photos and videos of his dogs. All I have to say is: what a guy!

Newsner stands firmly on the side of animals and believes in treating them with compassion. We couldn’t be prouder of Michael, who we think is a true hero, every day. Please like and share his story if you agree.