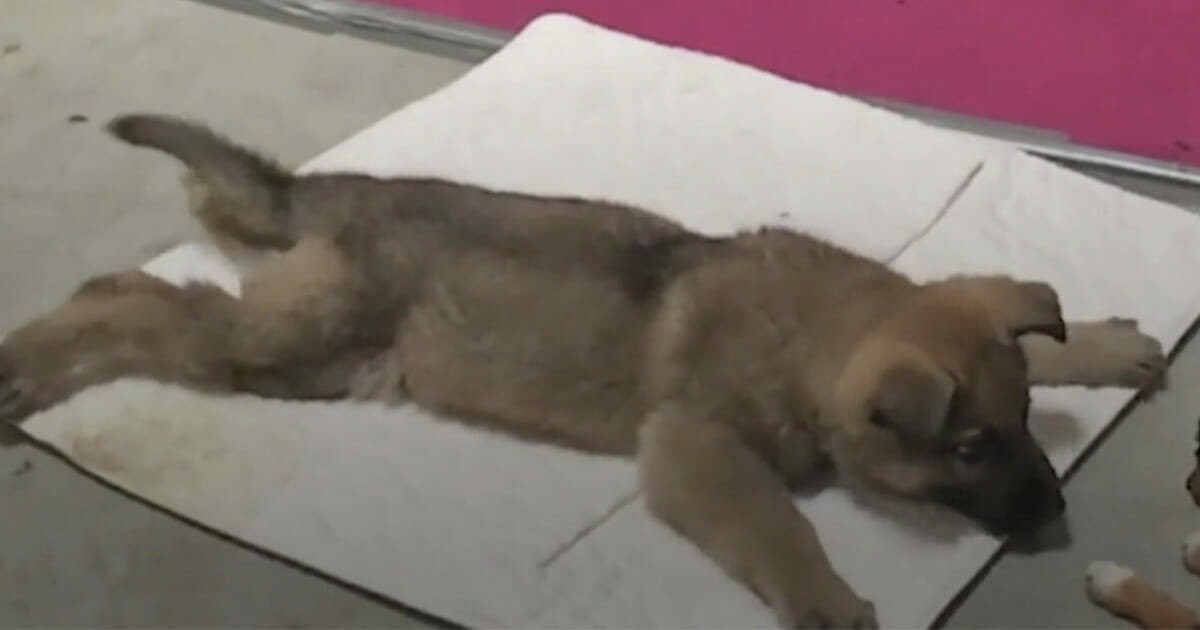 Anyone who’s ever had to put their dog to sleep knows just how heartbreaking an ordeal it is. Sometimes, though, there’s simply no other way. When the suffering has gone on for too long, it’s the kindest thing to do.

I pray you never experience it yourself, but if you do then it’s important you stay by your best friend’s side until the end. No dog should have to spend its final moments on earth, frightened, in the company of strangers.

The puppy in this particularly story, Starfish, was found in a box, her legs bent at an unnatural angle.

The person who found her rushed her to a vet, where it was surmised that she would have to be put to sleep. She had been crushed, and so there was nothing to be done for her.

The vet was loath to put her down, but the dog was simply too badly damaged. It wasn’t fair to keep her alive.

Just seconds before Starfish was due to be euthanized, however, the head of the shelter entered the room and called a halt to proceedings.

As per The Dodo, she wanted a second opinion on Starfish.

So they took the pup to another vet. After a thorough examination, a more positive prognosis was given.

Starfish had simply been born with a disability, “Swimmer Puppy Syndrome”. With the right help, however, she could be completely cured.

Instead of being able to walk like a normal puppy, Starfish appeared more suited to swimming.

However, she had a real charm about her. It wasn’t long before a family wanted to adopt her.

“We fell in love with the little dog. She taught us something we’d never seen before,” says owner Leigh Anne Gray.

“When I saw Starfish, I just attached so quickly.

“You couldn’t pick her up like you would a normal puppy. You had to hold her sideways, and she was flat like a pancake. But I just grabbed her, and didn’t let her go.”

From the get go, the entire family helped Starfish on her journey to normality.

“All we had to do was to get her feet up underneath her,” Leigh Anne said.

“And as soon as we got her onto the grass, she had a little something to hold onto, she’d follow us anywhere.”

But it wasn’t just Leigh Anne and her family that wanted Starfish to succeed. Even the staff from the animal shelter helped.

“She doesn’t know there’s anything wrong with her. She just gets up and does it again. And gets better, just a little bit, every single day.”

After just two months, Starfish was able to get up by herself. Soon, she was running like any other pup.

It was a point of pride and joy for the family to see the plucky dog’s recovery.

“That determination, that excitement for life, was missing for me. And I feel lucky that she came our way.”

Starfish went from being just a few short seconds from death to a healthy and happy dog with a bright future!

Watch the video below and try not to cry … we dare you.

Who else agrees all dogs should get the same compassion and love as Starfish?