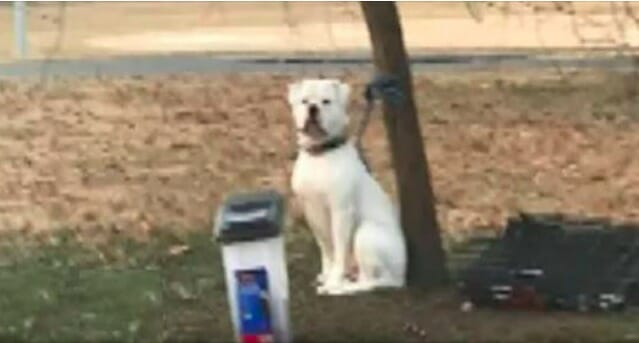 I’m always saddened to hear about animals being mistreated. This story is about a dog found at Patterson Park in Baltimore, USA.by a woman a 32-year-old public school teacher named  Stephanie Dagenhart.

One day when Stephanie was out in the park walking her own two rescue dogs, she came across a big, white dog — alone, tied to a tree, and shaking from the cold.

The dog looked scared, and upon closer inspection, Stephanie discovered that a note had been left a few meters from the dog.

Here’s what it said.

Stephanie was immediately concerned. The poor four-legged friend had obviously been abandoned by its owner. There can of course be variety of reasons as to why they may have done so — but none that are really valid.

Leaving a pet outdoors on a cold day with no one close by is especially heartless. In any case, the owner appeared to have had the intention for their dog to be found quickly, as he sat there in the park.

Stephanie stayed by the dog’s side and called the authorities. Animal services eventually showed up — meanwhile others showed up and provided the dog with treats and a warm blanket to help make him feel better.

It would turn out that Duke was two-years-old — and after just three days at the vet, he was ready to be adopted into a new forever home!

Duke’s story made headlines everywhere. “Duke’s story reached nearly every state in the nation, after a post about him being tied to a tree with a note went viral,” BARCS Animal Shelter wrote on Facebook.

Duke's story reached nearly every state in the nation, after a post about him being tied to a tree with a note went…

Almost exactly one year later, Duke has been adopted into a new home. His new owner is U.S. Army Officer Wallace White, who fell in love with him as soon as he saw him at the shelter.

According to BARCS Animal Shelter, Wallace didn’t even realize he had picked out a celebrity dog until a friend pointed it out to him.

Many thanks to Stephanie and now Wallace who both did the right thing when they saw a dog in need!