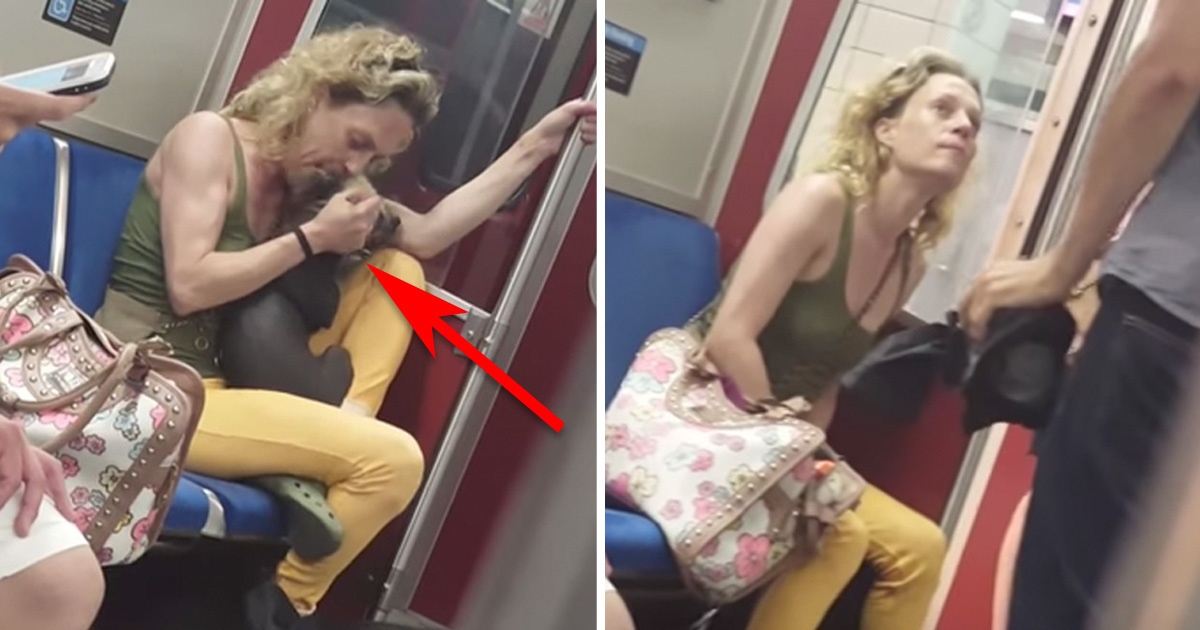 Some people should not be allowed to be dog owners and this lady is one of them!

In a cruel and shameless act, the woman is seen beating and torturing her dog on the subway in front of fellow passengers.

It’s all caught on camera. At long last, a passenger steps in and asks her to stop.

Now the disturbing clip is spreading all over the internet.

The footage, which first emerged last week, was captured on a subway in Toronto, Canada.

In it, you see a blonde woman repeatedly hit, pinch and even bite her dog. The dog seems clearly distressed. It growles and tries desperately tries to get away from its owner. But the merciless woman just aggressively yanks its leash.

It’s all done right in front of the eyes of the other passengers on the train. One person catches everything with their camera phone, while another person has had enough and confronts the woman about the abuse.

The brave stranger walks up to her and asks her to stop hitting her dog. The woman gets loud, rude and starts cursing at the man, asking him to go away.

But the man refuses to give in, stays put and continues to defy her, despite her bullying.

Eventually, train security are called on board and interfere.

“A man walked to the driver’s room,” Roxy Huang, who posted the video, says. “The whole train stopped, and more than 3 TTC [train] staff walked to her and then she got off the train.”

According to the Toronto Sun, the police were then called, but they couldn’t remove the dog from the woman as they did not have enough grounds or proof for the abuse.

The next day however, the video was shown to authorities which prompted them to quickly locate the woman. The dog has now been taken away from her and she no longer has custody over it.

You can watch the video below. Warning: video contains images that may be distressing to some.

We are so happy to hear that they have removed this poor dog from this woman. This person should never be able to own any animal ever again.

Thank goodness for the good people who intervened and rescued this pooch. Please consider sharing this story if you believe that animals should never be treated this way.