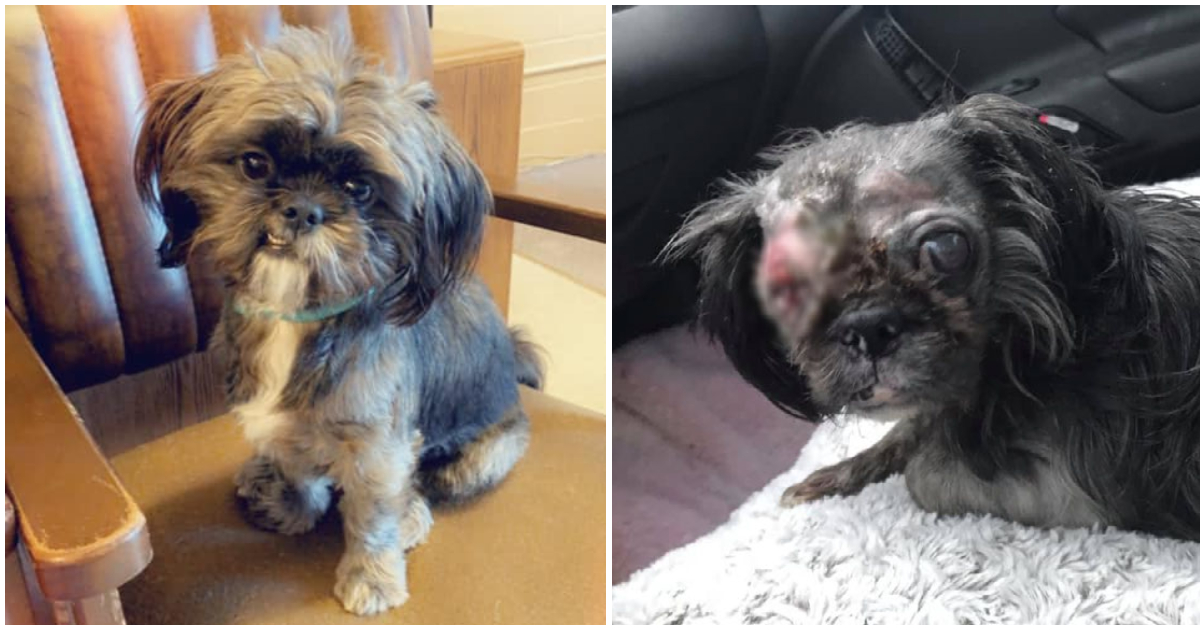 There are some truly sick people out in the world, and it’s always shocking to see what people will do to an innocent dog.

After one horrific act of cruelty, one woman is seeking justice for her dog who has been left blind and scarred with acid.

Mandy Garner, from Baytown, Texas, is the owner of a service dog Gizmo, a black Shitzu. Gizmo has always been a happy and loyal dog, but on March 20, something happened that changed everything.

Mandy let the dog out to use the bathroom, and later found him near his kennel, shaking. Mandy thought he had been hit by a car.

She went to look at her dog, and was horrified to see that he was severely burned.

She rushed Gizmo to the vet. The doctors found no broken bones, but provided pain medication for the burns. The visit cost Mandy over $1,000.

Caution: photos below contain upsetting images. They have been blurred for graphic content, but viewer discretion is advised.

Shortly after the incident, Mandy went looking for answers, and discovered that her dog’s horrific injury might not have been an accident.

Stepping outside her home, she saw two neighbor girls laughing at her. She asked them if they had seen anything, and when she showed them a photo of Gizmo, they laughed even more.

Mandy says that the girls’ parents own a carpet cleaning business, so they would have access to chemicals, and says they are often causing trouble in the neighborhood, leading her to suspect they maliciously hurt her dog.

“Gizmo is a very sweet dog and loves children so the kids possibly called him over there and he rolled over on his belly and they poured borax acid on him,” Mandy wrote on Facebook.

A second vet appointment confirmed that Gizmo had been burned with acid on his face and stomach. He is also now blind, and has undergone a surgery to have his eyes removed.

“[The vet] got with a pest control officer. They said it was a large amount of chemical,” Mandy told KTRK. “He said they intentionally did it.”

“I am worried this can happen again … very worried.”

Gizmo will be blind and permanently scarred for life. Mandy says she fears that he won’t be the same dog anymore, as he won’t be able to play with his toys.

But now, Mandy is seeking justice for her dog, although she says her options are limited. She wrote on Facebook that she has filed reports with the Baytown Police Department, the Harris County Sheriffs Office and the Houston SPCA, but no one has taken the case. (However, a spokesperson for the Harris County Sheriff’s Office told People that the case was now under investigation.)

“[It’s] very devastating,” Mandy told KTRK. “I don’t see how anyone can hurt an animal. It takes a sick person to do it.”

In the meantime, Mandy has taken donations to fund Gizmo’s expensive medical treatments. The fundraising page has received over $5,700 in donations.

And now, Mandy will do her best to care for Gizmo and help him move on from this horrible incident: “Now, I will be his service mama,” Mandy said.

This poor dog — it’s shocking to realize anyone could do this. We hope the people responsible face justice.

Share this story to spread the word about this shocking case so Mandy and Gizmo get the help they need.