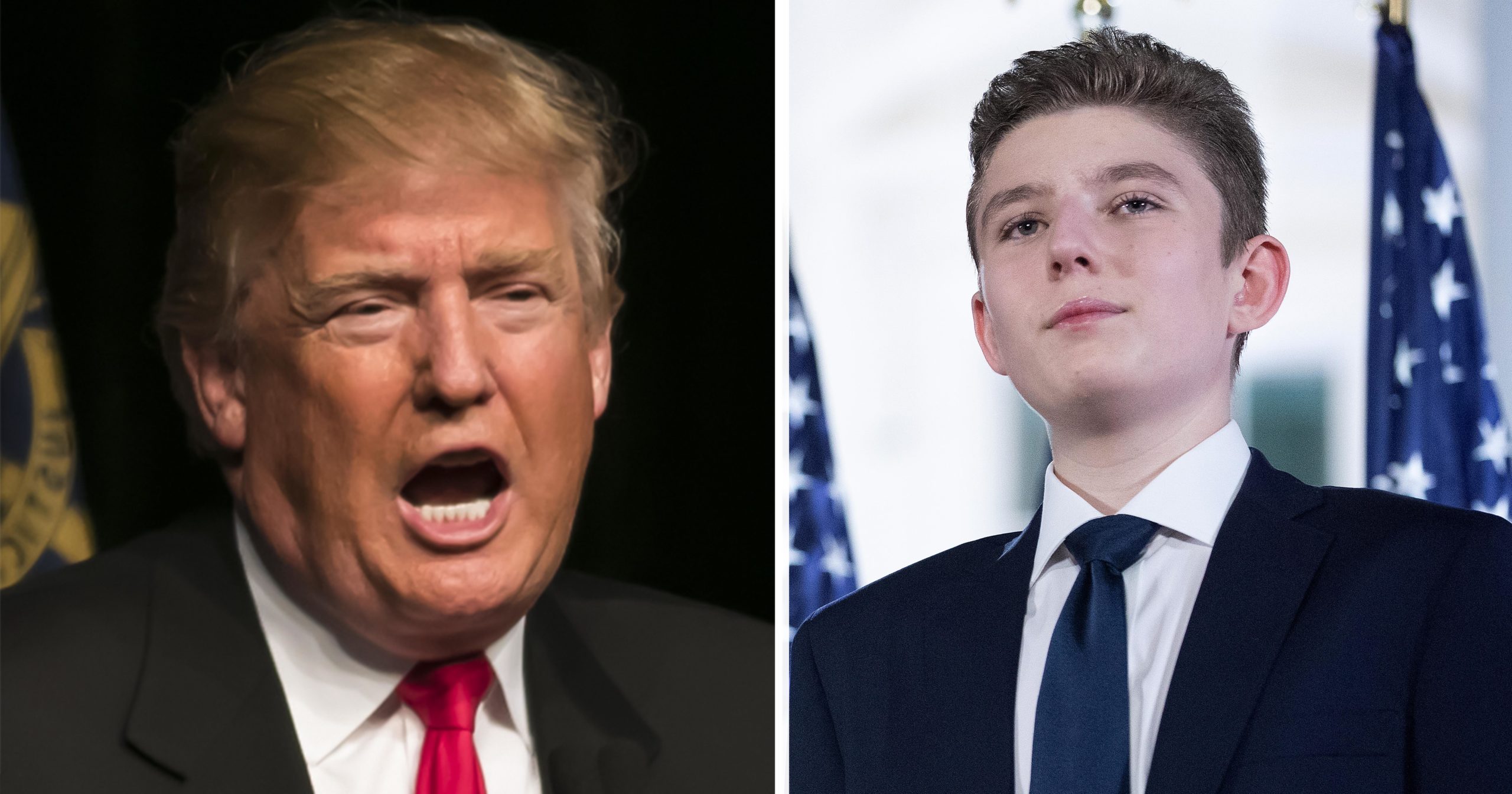 It’s not often you hear about Barron Trump and what he thought of his father’s deeds as President of the United States. However, in a new book, Donald Trump claimed that his son wasn’t happy after the first presidential debate with Joe Biden.

According to the new book, ‘Rigged: How the Media, Big Tech, and the Democrats Seized Our Elections’ by Fox commentator Mollie Hemingway, Barron Trump thought his father was ‘too tough’ on Joe Biden.

Even though it’s been nine months since Donald Trump left the White House, news about his four-year tenure as president – as well as information about Melania and Ivanka Trump – is still being revealed.

New information about the Trump family

A couple of weeks ago, it was revealed that Ivanka Trump tried to ‘force her way’ into a meeting with Queen Elizabeth, breaching protocol. Also, Donald Trump was further said to have been furious with his wife and First Lady Melania Trump because she wore a infamous jacket when visiting a migrant housing facility in Texas

As for the Trump family, it’s been quite quiet regarding their occupations after the White House. It’s understood that the Trump family has moved to their Mar-a-Lago resort in Florida, where Donald and Melania’s youngest son, Barron Trump, has started a new school.

A spokesperson for the private school Oxbridge Academy confirmed in August that Barron Trump’s enrolling at the prestigious high school. He is part of the class of 2024.

“We look forward to welcoming him into our school and community,” the school’s Director of Advancement Scott Siegfried said, as quoted by People.

Furthermore, it also has clubs and different activities that students can participate in, such as the National Honor Society. All students at the school are also required to have an Apple laptop.

Just a couple of weeks after his joining the school was announced, Barron Trump started the new school year, as first reported by The Sun.

When it comes to education, Barron will also learn how to be a great friend. The school reportedly imparts lessons of kindness upon its students.

It’s still unclear if Donald Trump will head into the Presidential race in 2024. Many people – his niece Mary Trump being one of them – have spoken about Trump running for president once again, while others aren’t quite sure.

A former White House aide suggested that he might not even be able to run because of his health.

Even though Donald Trump left the White House back in January, new information about his presidency continues to come to light.

During the first debate – moderated by Chris Wallace – the two candidates went at each other several times, as Donald Trump interrupted and heckled Biden. The now President responded by calling Trump a “clown.”

According to Slate, Donald Trump interrupted Joe Biden 128 times during the debate. Chris Wallace asked the president at least 25 times to stop interrupting and obey the debate rules, the site reported at the time.

According to the new book Rigged: How the Media, Big Tech, and the Democrats Seized Our Elections by Fox commentator and The Federalist senior editor Mollie Hemingway, Trump was said to still be fuming at Chris Wallace because of the first presidential debate back in September 2020.

Barron Trump thought his father was ‘too tough’ with Biden

This is according to the Daily Mail, which has obtained a section of the book.

“The problem was Biden would speak and it was lie after lie, after lie. Everything he said was a lie, this guy, and then Chris Wallace wouldn’t let you respond. Chris Wallace was terrible,” Trump said, according to the UK newspaper.

Many were annoyed about Trump’s behavior at the debate, interrupting Joe Biden many times. Afterward, debate organizers even released a statement, saying that the next debate had to be “more orderly.”

However, it turns out it wasn’t only people not cheering for him that didn’t like his actions. In fact, his own son, Barron Trump, opposed his father.

In the book by Hemingway, Donald Trump personally admitted that his then 14-year old son thought he was too harsh on Biden. And also, that he “catched wind” of some of the negative feedback.

‘People thought I was too belligerent,” Trump said.

“I will say my own son Barron said, ‘Dad, you were too tough. You didn’t have to keep interrupting him.'”

This is the first time that any information about Barron Trump’s life at the White House has reached the public. During their time in Washington D.C, Melania Trump was very clear on that she was keen on protecting her son from scrutiny, since being the president’s son can be a demanding thing. She took care of any statements or comments made by Barron.

Pictures from earlier this summer gained plenty of attention, with Melania and Barron Trump showing up in New York City.

The new picture was snapped as Barron and Melania left their Manhattan home at the Trump Tower. According to the Daily Mail, Barron was carrying his mother’s rare Louis Vuitton bag. If you want one for yourself, you’d have to pay $3,995.

Even though Barron is only 15 years of age, he’s already the tallest person in his family.

Trump is “only” 6’3″. Earlier this year, the former president spoke of his son’s height.

What do you think about Barron Trump thinking his father was too tough on Joe Biden during the Presidential debate? Give us your thoughts in the comment section.