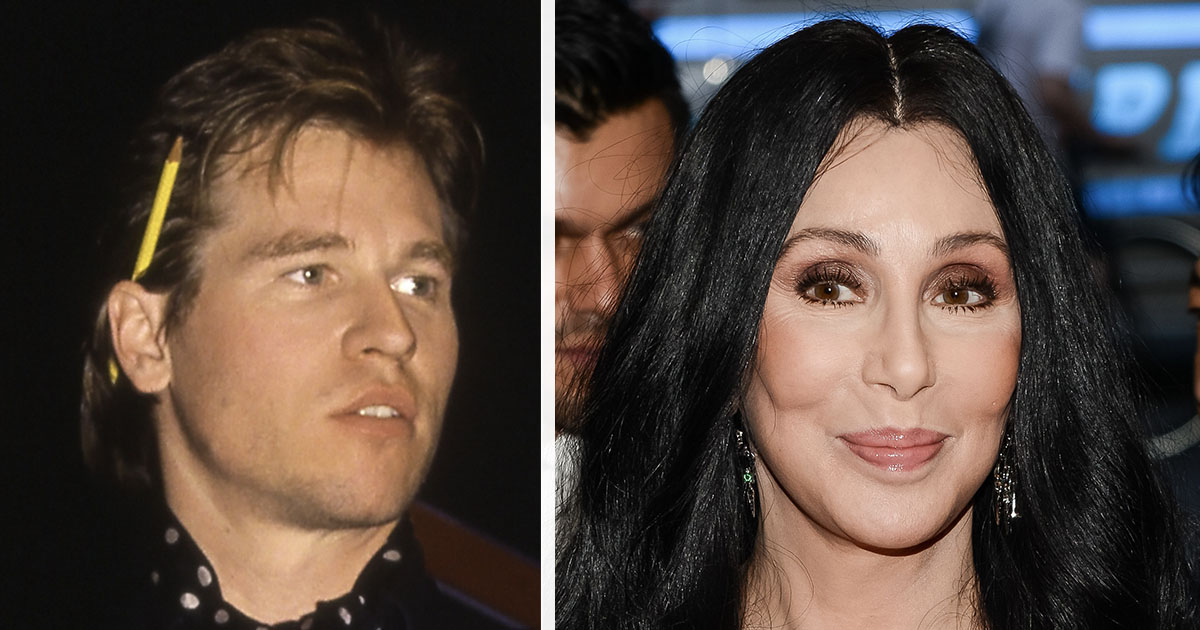 Cher has had a very special life, having success as a worldwide music star as well as actress. Through the years, she’s been married twice, and been in relationships with many famous people.

In the 1980s, Cher was in a relationship with actor Val Kilmer. The two broke up after a number of years, but remained great friends.

Now, the artist reveals secrets about their relationship – and telling the truth on why it actually ended.

On May 20 1946 in El Centro, California, Cherilyn Sarkisian was born.

The first part of her name was for Lana Turner’s daughter Cheryl, a name that her mother Georgia Holt loved. The second part was for her grandmother, named Lynda, which resulted in Cherilyn.

Already at a young age, Cherilyn started calling herself “Cher,” because of Georgie getting mad and saying “CheriLYN“.

When I think of Cher, I can’t help but think on her amazing career. When she started out, she did so alongside Sonny Bono, a person with whom she had both a wonderful and stormy relationship.

The couple met for the first time in Los Angeles, when Cher had dropped out of high school at 16 and moved LA. She took acting classes and worked to support herself, and proved to be a terrific singer.

Sonny, who was 11 years older, worked as an assistant to legendary record producer Phil Spector. Before long, the couple hit it off.

Bono found work for Cher as a backup session singer, where she performed on many of Specter’s recordings. The Ronettes’ super-hit “Be My Baby” and The Righteous Brothers’ “You’ve Lost That Loving Feeling” were just two of many songs Cheer worked on.

Sonny and Cher first collaborated on their own records in 1964. However, their first singles weren’t really what the audience wanted. This all changed in September 1964, when they released “Baby Don’t Go.”

Cher’s mother Georgia Holt had her brother Mickey hire the duo to open for the Righteous Brothers, and it was the start of a long and successful career which would culminate with Cher being labeled “The Goddess of Pop.”

“Baby Don’t Go” became the duo’s first hit, and proved the beginning of a highly successful pairing that lasted until the mid-1970s.

And on a personal level, the love between Cher and Sonny grew.

“I was with my girlfriend, who was really beautiful,” Cher recalled. “He liked her, so he didn’t really say anything to me. He was like, ‘Oh yeah, kid.’”

She added that “everyone just disappeared” when she first saw him, recalling that “he was the most unusual person I’d ever seen.”

Soon, Cher and Bono were living together. They began a romantic relationship, though this took a while to blossom. According to Cher, Bono simply wasn’t physically attracted to her at first. That soon changed, and the couple began dating for real.

In 1965, the two got married – and at the same time, started to work on their professional music careers.

Most importantly, the couple had a child, Chaz Bono, together. He was originally born Chastity Bono on March 4, 1969. However, because he was a celebrity child, he became famous immediately and it wasn’t long before TV audiences got to see him.

Bono was named after the movie Chasity, a movie produced by Sonny. Cher played the lead role, portraying a young, bisexual hippie runaway.

Sonny Bono and Cher were married until 1975. While she famously was navigating through a messy divorce as well as a custody battle, she met her second husband, Gregg Allman, known as one of the members of the band The Allman Brothers Band.

According to Allman’s memoir, the couple met for the first time in January 1975, backstage at one of Gregg’s solo shows in Los Angeles. At the time, Cher was in the middle of her divorce from Bono, and that specific night, she was actually on a date with music mogul David Geffin.

Once they met, Allman put on his charm.

“[Cher] smelled like I would imagine a mermaid would smell—I’ve never smelled it since, and I’ll never forget it… I was so rude, I didn’t say hello or nothing at all, because I was so blinded by her.”

I was walking by, and she was down on the floor looking for something. She looked up and said, ‘Oh, I lost my earring.’ Then she said, ‘Here’s my number – call me’.”

Cher and Gregg Allman started dating, and soon, they engaged in a relationship. However, the coming years were rough.

In 1976, the couple welcomed son Elijah Blue Allman, and they also got married. However, their divorce was finalized in 1979.

Even though they had their ups and downs, Cher looked back on their time together as happy.

“Nobody ever made me feel as happy as Gregory did, she told People in 1978. “he’s wonderful. I don’t understand why he can’t see it. He’s the kindest, most gentle, loving husband and father. But then, he forgets and everything goes to sh*t.”

Since then, Cher hasn’t been married. The now-75-year old legendary singer is living her best life.

For two years in the 1980s, Cher was in a relationship with Val Kilmer. The couple dated between 1982 and 1984, and the fun-loving couple seemed to be very happy together, and remained great friends following their separation.

So what really happened? Cher explains the true reason to why they broke up.

Val Kilmer and Cher met at one of her friend’s birthday parties. In People, Cher describes the night they met.

Met at a birthday party

“[My friend] said, ‘I invited this guy and I think either you or my friend who’s an editor will like him.’ We became friends because we laughed at the same things constantly. He would sleep over and it was just a friendship [at first.] That took a long time. Well, I guess not really a long time,” Cher wrote.

“He was so young. Was he 22? What was I? I don’t know. Thirty something. It was a bigger deal back then. The truth was if I hadn’t gone out with younger men, I would have never had a date. Younger men weren’t intimidated by older women. But older men in my age category, they weren’t having it. “

At the time Cher and Val Kilmer started dating, her second son Elijah was about 6 years old. She describes how great he was with her son, spending New Year’s Eve together which she says was “the best New Year’s Eves of my life.”

Kilmer used to let Elijah drive the truck on his property, and Cher loved it. So what went wrong?

“We had unbelievable times and then put up with some times when they weren’t [that way] because we were both Alpha males.  We were both individuals and neither of us was going to give up on that,” Cher wrote in People.

“Our sense of humor, and what we would put up with from one another, was more than I think I’ve ever had with any other guy,” she added. “He would just go off and do his own thing and you just had to be prepared. And he was so beautiful. It went from madly in love and laughing hysterically to respecting each other’s ability. “

Cher continued with her successful career following her breakup with Val Kilmer, releasing several albums as well as heading into the film business.

But even though the two weren’t involved in a romantic relationship, their friendship has never faded.

In 2015, Val Kilmer was tragically diagnosed with throat cancer. However, he didn’t make it public until 2017.

Cher knew about it, and as his condition worsened she decided to do anything she could to help him. That included inviting him over to stay in her guest house.

“He was at my house a lot of the time he was sick,” she told People. “He was brave the whole time. I saw how sick he was.”

One night, Kilmer woke up vomiting — and it actually turned into a funny story.

“Once when the paramedics showed up after he was so sick and coughing up blood, he looked at me and I looked at him and we both knew what we were thinking,” she added. “Because those guys are so handsome. When one of those paramedics comes to your house, you just know you’re going to see somebody who’s really cute.”

In his 2020 book, I’m Your Huckleberry, Val Kilmer also recalled the incident.

“Cher stepped in and stepped up,” Kilmer wrote about that night. “I saw her scanning the paramedic, who was Gregory Peck drop-dead handsome. Only in Hollywood, right? Despite the fact that I was covered in blood, I caught her eye and bounced my brows like Groucho Marx. Hubba Hubba,”

“Cher was bashful to be busted but then couldn’t help laughing out loud at the audacity. Here we were, joking about beauty and desire, while I looked like a stunt man from [Quentin] Tarantino’s Reservoir Dogs and, yes, while my life seemed to be in mortal danger. We laughed out loud before they finished with my vitals and shut me up with an oxygen mask.”

Val Kilmer went through chemotherapy treatment, and a tracheostomy that permanently damaged his speaking voice.

The documentary – which gives an intimate look at the Top Gun star’s life as well as cancer battle – was produced by Kilmer himself alongside his son Jack and daughter Mercedes.

“Now that it’s more difficult to speak, I want to tell my story more than ever,” Kilmer says in the documentary.

“You are brave and beyond brilliant”

He let the world know how his speaking voice also pretty much has disappeared.

“I can’t speak without plugging this hole,” he said in the film, pointing to his throat. “You have to make the choice to breathe or to eat. It’s an obstacle that is very present with whoever sees me.”

Cher was one of the many people who watched the film about Kilmer. Speaking to People, she explained what she thought of the movie, and also, saying that she wrote him a letter.

“He is so creative like nobody I’ve ever known and how brave he was to do it in the way that he did it,” Cher told People of the documentary.

Her letter to her dear friend read, “Valus Maximus, I’m sorry if I did anything to piss you off or hurt your feelings. I love you, and your documentary was all things…I love the things that pissed me off, the things that made me hysterical, amazed, hurt, astonished, etc. You are brave and beyond brilliant. Ethel.”

We really hope that Cher and Val Kilmer will have many more wonderful moments together. The fact that they have remained great friends makes us so happy, and we wish them all the best moving forward.

Val Kilmer and Cher’s friendship bond is truly inspiring and sweet. Please, share this story to honor them!