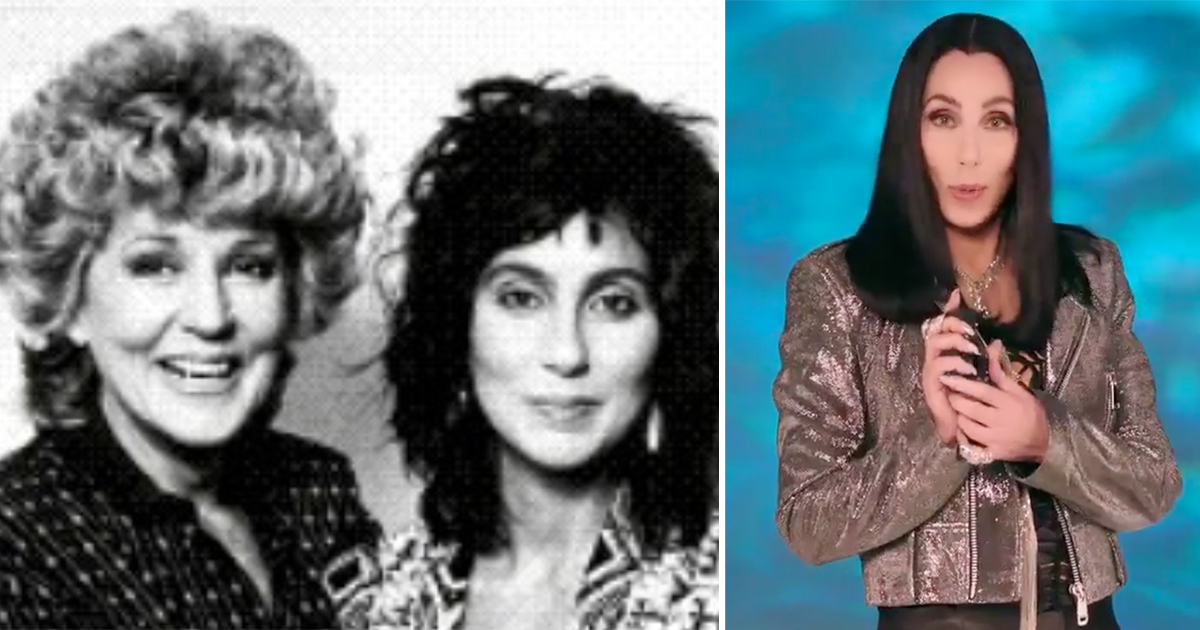 Cher is the pop star that is just more than a star. She’s an icon, still delivering incredible music and breaking barriers. But did you know that her mother, Georgia Holt, also had a career in show business?

This is the story of Georgia Holt, who just turned 94 years old and still look incredibly stunning.

Cher shook the world with her glamorous style, releasing hits such as “Believe” and “If I Could Turn Back Time and becoming a music legend.

In the 60’s, she started singing with her husband Sonny Bondo, hitting the No.1 with the song “I Got You Babe”. They later on starred together on The Sonny and Cher Comedy Hour”.

Also, she won the best actress Oscar for her role in the movie “Moonstruck”, released in 1987.

But the fact that she made it into show business might be because of her mother, Georgia Holt already being there.

Georgia Holt, born Jackie Jean Crouch was born on Jun. 9 1926 in Kensett, Arkansas. Her mother was only 13 years old when she had Georgia, and left just a couple of years later.

Her father taught her to sing and play the guitar, and at age 6 she started performing on the Oklahoma City Radio. Georgia was also in a band called The Texas Playboys a couple of years later.

Georgia ended up travelling around with her father, singing on saloons for nickels and dimes, as she recalls in an interview with People in 1978.

They hitchhiked west where she performed in various places, sleeping in Salvation Army shelters and not being able to afford any clothes.

During her teenage years, Georgia mostly travelled between her separated parents. On her count, she attended no less than 17 different junior high schools.

Georgia and her father ended up in Los Angeles, where she sang blues on the radio. She worked in a woman’s home in Los Angeles as a mother’s helper for two years.

At the same time, Georgia went to school, but she never thought she fit in.

“I was the only poor kid in the school, and I was already insecure. But my voice saved me because I sang in school, and I was real popular because of my voice,” she said in an interview with the Chicago Tribune.

Georgia ended up in Fresno, California, where she started working in a donut shop. While working in the shop, she met her first husband, John Sarkisian. She described him as charming and a person that could talk you into anything, which he also did.

The couple married in Reno, but less than a year later they split. But Georgia had a child on the way.

“He told me to try it for three months, and if I didn’t like it, then I could walk out. Well, before three months was out I was pregnant with Cher.”

READ ALSO: Matthew Labyorteaux from ‘Little House on the Prairie’ – this is him today

Georgia thought of having an abortion, but her mother convinced her to go back to John.

She took her mothers advice and moved to El Centro, California, where the father of John had bought him five trucks for a produce business. However, he lost them all gambling, and now they had a baby and no stability.

On May 20. 1946 in El Centro, California, Cherilyn Sarkisian was born.

The first part of her name was for Lana Turner’s daughter Cheryl, a name that Georgia loved. The second part was for her mother, named Lynda, which resulted in Cherilyn.

Already at a young age, Cherilyn started calling herself “Cher”, because of Georgie getting mad and saying “CheriLYN“.

At age 21, she decided to change her name from Jackie Jean to Georgia, all because one of her best friends were from the state.

Georgia and Cher left for Los Angeles once again without the father. In 1950, she had her first role in a movie and five years later she appeared in one episode of the TV series ‘The Adventures of Ozzie & Harriet’.

She actually lost a film role in  The Asphalt Jungle (1950) to actress Marilyn Monroe.

Georgia tried hard to raise Cher, supporting her by working as a waitress and a model.

Shortly after her first divorce with Sarkisian, Georgia med Chris Alcaide, which also ended up in a divorce. Then, the married actor John Southall, with which she had her second daughter, Georganne Elizabeth Southall. Later, she became Georganne LaPiere after one of Holt’s husbands adopted her together with Cher.

As a teenager, Cher met Sonny Bono, Georgia had her brother Mickey hire the duo to open for the Righteous Brothers, and it was the start of. along and successful career, ending with Cher being called “The Goddess of Pop.”

She decided to open up a sweet quilt-and-bed boutique in Brentwood, Los Angeles. And it would turn out to be the beginning of another love story.

While running the boutique, Holt met an antique dealer from Washington named Craig Spencer. At the time, it was brow-raising since he was 21 years younger than her.

“I knew deep inside he was a good person, but I thought he was interested in me just so he could tell people he went to bed with Cher’s mother,” she told People.

Georgia and Craig fell deeply in love, and in 1979, only a month after they first met, he moved into her home in Encino. From that day on, the couple have been together.

Georgia Holt was singing from an early age, and later on, she would also release music herself.

The album Honky Tonk Woman was recorded in 1982, but it wasn’t until 2013 it was released. It includes the track “Im Just Your Yesterday“, a duet with her beloved daughter Cher.
The album peaked No. 43 on Top Country Albums and 13th on Heatseekers Albums.

Georgia never made it on the big screen like her daughter. But speaking to ABC, she still never looks back wishing it was her career instead, saying she’s trilled for her daughter.

In 2013, Georgia Holt was the subject in the Lifetime documentary Dear Mom, Love Cher, with Cher being the executive producer.

The grand pop star has praised her mother many times through interviews and social media. Her love and respect for her mother shines through, and in 2017, she shared a wonderful old photo of Holt.

The mother-daughter relationship wasn’t always perfect. When appearing on The Oprah Winfrey Show in 1990, Cher spoke about their relationship as a kind of interpersonal one.

At that time, it wasn’t the best.

“I’ve experienced the slap part but I never experienced telling her all my feelings. My mother was very strict, I mean, you couldn’t really scream and yell at my mother,” Cher said.

Years later however, Georgia Holt and Cher are now back to being best friends.

On Instagram, Cher as shared several photos of her mother through the years, and also written some wonderful words about her.

Last year, on Georgia’s birthday, Cher shared a newly taken photo of her, her sister and her mother together with a lovely set of words.

Cher was honored with at the Kennedy Center Honors ceremony, for her lifetime of contributions to American culture. Her mother is seen wearing it in the picture

People were astounded over the fact that she was 93 years old. She looks absolutely amazing!

On Mothers Day in May earlier this year, Cher one again took to social media with a wonderful tribute to her mother. She was battling an illness, which thankfully wasn’t COVID-19, the legendary singer said.

Quite recently, On Mother’s Day in May, the legendary singer took to Twitter with a heart-melting tribute to her mother who was battling an illness which was as she thankfully said, “Not Covid 19.”

Cher is still making lovely music, and Georgia can watch as her daughter is giving millions of people joy every day.

She also has two grandchildren in Chaz Bono, 51 and Elijah Blue Allman, 44.

The 94-year-old is probably more recognized for being the mother of super star Cher. But. we can all agree, she should definitely be proud of her long and happy life, that turned out to be amazing.

This is really an amazing story. We’re sure that Cher’s very proud of her mother.

Please, share this article with friends and family to recognize the life of this wonderful woman!