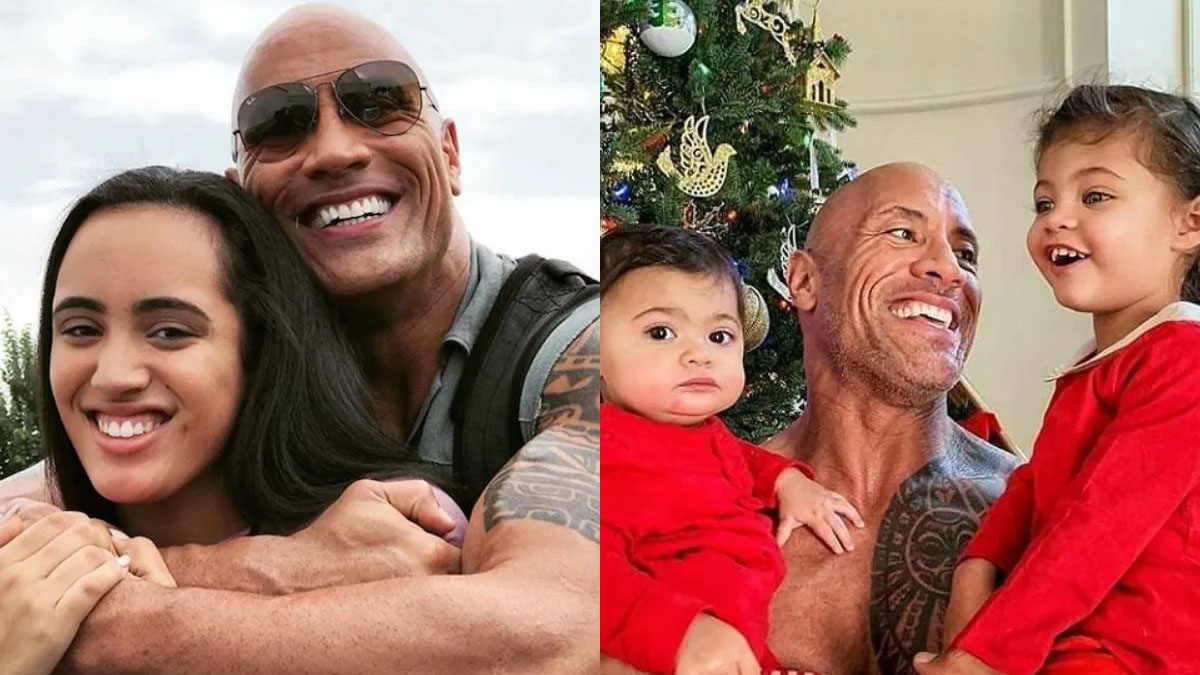 Dwayne ‘the Rock’ Johnson isn’t only one of the highest-paid actors in Hollywood and one of the nicest actors out there, he also appears to be a doting father.

The Jungle Cruise star has three daughters, Simone by his first wife and two girls Jasmine and Tiana from his marriage to second wife Lauren Hashian.

But the former professional wrestler admits that he wasn’t always the picture-perfect father and credits age and wisdom for the dad we see today.

Johnson met his first wife Dany Garcia while they were both studying at the University of Miami where he had a football scholarship. After the two got married in 1997, they had a daughter, Simone.

The two divorced a decade later but it was on amicable terms and due to the fact Garcia took over Johnson’s career leading him on the path to stardom.

Dwayne had asked Garcia to take over the management of his acting career. She is a businesswoman, IFBB professional bodybuilder, and producer and was asked by Johnson to help him achieve success without having to meet Hollywood size standards.

“When I got to LA, I was told ‘you can’t be as big, you gotta lose weight, you gotta go on a diet, you can’t call yourself The Rock’…and of course if you don’t know any better you gotta buy into it,” he said in an interview with James Corden.

The couple, who have a daughter together, reportedly decided if Garcia was going to take on this role they couldn’t also maintain a personal relationship so the two separated.

Johnson has maintained a healthy relationship with his eldest daughter, now 20-years-old, who announced in February that she had started training at the WWE Performance Center making her the first fourth-generation WWE wrestler after she signed a contract in May.

The 49-year-old has always been hugely supportive of his daughter. When she graduated from high school in 2019 and moved to New York University he shared the achievement with his fans.

“Very proud of my first daughter graduating high school, […] and is now NYU bound. I love you, and one day you’ll stop pulling away from my beastly arms & kisses,” he captioned a picture of himself and her.

While his eldest daughter pursues her dreams in the wrestling ring, Johnson has two younger daughters who seem to mostly like pursuing their dreams of becoming a princess, and their doting father is only too happy to indulge.

“We had Simone when I was 29. I was flying by the seat of my pants. All of the dads out there know, and a lot of moms out there know — when you’re in your 20s, you’re still trying to figure out who you are and your place in the world,” he told Fatherly.

“I was so excited to be a dad but terrified at the same time.”

He says that he now sees the world through a different lens.

“The taste for an idea of success is different. I still chase it today, but with different perspective and a different anchoring.

“I was making a transition to Hollywood, trying to be the best husband and best dad I could be as a brand-new father. Now, being in my 40s, I’ve lived a little bit of life. I hope I’m a little wiser. It allows me to be a greater dad.”

He enjoys a great relationship with all three of his kids and despite all the images of himself on his social media the best photos are those captured with his children.