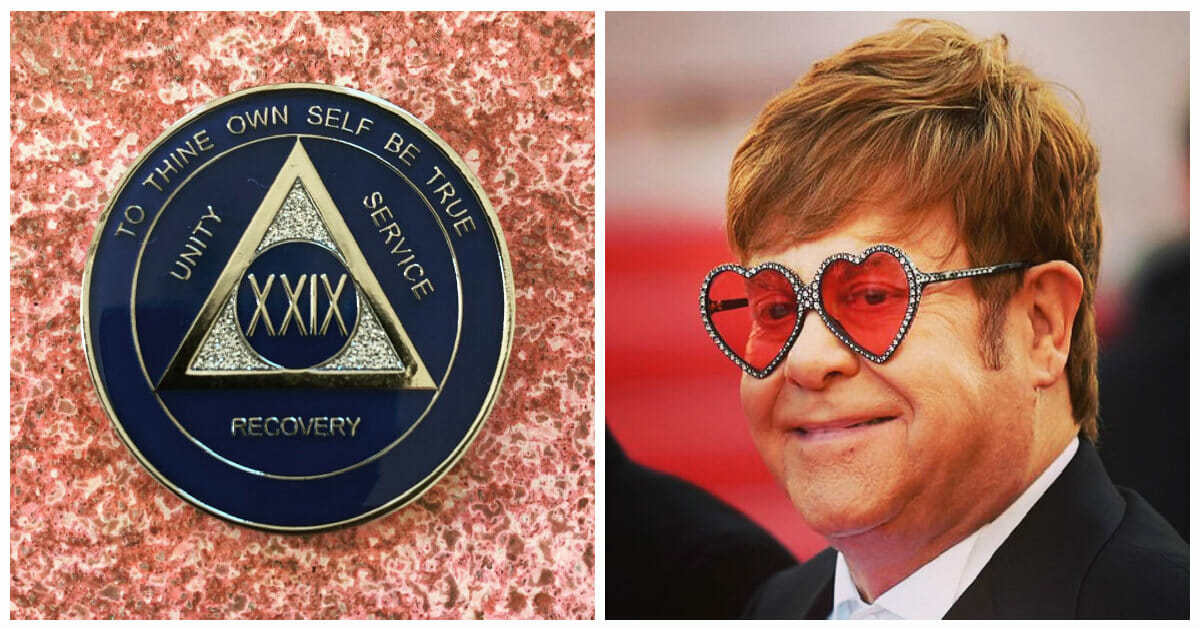 After a career spanning five decades, Elton John has a lot to celebrate. He’s one of the best-selling artists of all time, he’s written and recorded countless classic songs and albums, and is a beloved celebrity around the world.

But recently, Elton celebrated a significant milestone — one that has nothing to do with his music, but is a major achievement in its own way.

W?W!!! Thank-you Cannes for giving @rocketmanmovie a rousing welcome and such a warm reception!! It was a magical day for me, and I’m full of praise and thanks to everyone who worked so tirelessly on bringing my life story to the big screen ??

On July 29, Elton got personal on his Instagram, sharing a photo of his Alcoholics Anonymous sobriety coin. He was celebrating 29 years without drinking.

“29 years ago today, I was a broken man,” he wrote on Instagram. “I finally summoned up the courage to say 3 words that would change my life: ‘I need help.'”

29 years ago today, I was a broken man. I finally summoned up the courage to say 3 words that would change my life: “I need help”. Thank-you to all the selfless people who have helped me on my journey through sobriety. I am eternally grateful.

“Thank-you to all the selfless people who have helped me on my journey through sobriety,” Elton wrote. “I am eternally grateful.”

Elton’s fame and success coincided with deep personal troubles. He developed addictions to cocaine, sex and alcohol, and was a bulimic.

“This is how bleak it was: I’d stay up, I’d smoke joints, I’d drink a bottle of Johnnie Walker and then I’d stay up for three days and then I’d go to sleep for a day and half, get up, and because I was so hungry, because I hadn’t eaten anything, I’d binge and have like three bacon sandwiches, a pot of ice cream and then I’d throw it up, because I became bulimic and then go and do the whole thing all over again,” he recalled to Piers Morgan in a 2010 interview.

Loving my shows across Europe ❤️ Each country has been a blast and I can’t wait for more in Italy tonight! #tourdiary #EltonFarewellTour ?: @bengibsonphoto

At the height of his career, his demons nearly killed him.

“There were times I was having chest pains or staying up for three days at a time,” he told Variety in May. “I used to have spasms and be found on the floor and they’d put me back to bed and half an hour later I’d be doing the same. It’s crazy.”

Facing an untimely death, Elton made the decision to get sober. This saga in his life recently came back into the spotlight, thanks to the recent biographical film Rocketman, which was released in May. The movie depicts the singer’s personal demons, as Elton (played by Taron Egerton) tells his story to a support group after checking into rehab.

But after getting help, Elton was back on track, returning to a successful career that’s still going strong decades later. He’s now married to David Furnish, and they have two children together.

Elton is still in the spotlight. In addition Rocketman, you can hear his classic songs in the new Lion King remake, the number one movie in the world right now. He’s also currently on his “Farewell Yellow Brick Road” concert tour, delighting sold-out crowds across the world. It is intended to be his final tour, but will last three years.

Omaha, you lit up the room and lifted me up ? Next up, we’re in Kansas City – see you tonight @sprintcenter! #EltonFarewellTour #tourdiary #omaha #tourlife #USAtravels ?: @bengibsonphoto

It’s a remarkable career, all made possible by that fateful choice to get help.

“I am a survivor,” Elton told Variety. “I’ve survived a lot of things. Life is full of pitfalls, even when you’re sober. I can deal with them now because I don’t have to run away and hide.”

After everything, he’s still standing.