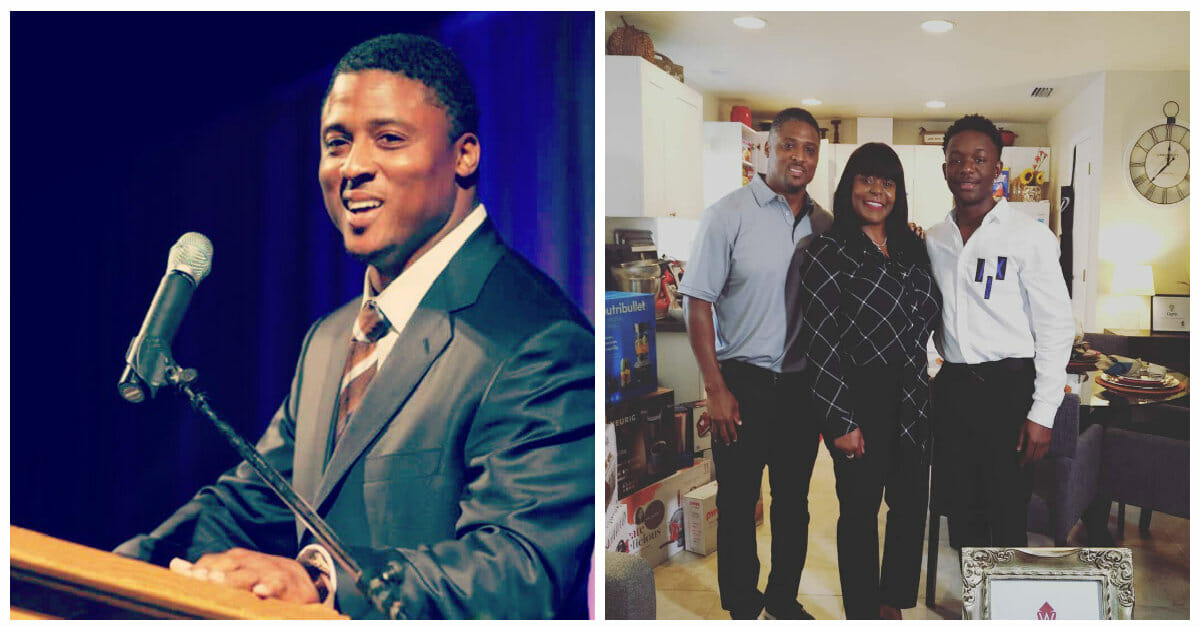 It’s always nice to see athletes use their success to give back to their communities, becoming heroes in real life as much as they are on the field.

Their charitable work can really make a big difference in the lives of people in need… like one woman, who recently became one of the nearly 200 people helped out by a former NFL star Warrick Dunn.

Dunn played in the NFL for 12 seasons as a running back for the Tampa Bay Buccaneers and the Atlanta Falcons. At the same time, Dunn was on a personal mission to make the world a better place, in honor of someone very special to him.

Dunn was a high school senior who had just turned 18, but was thrust into a role of responsibility for his five orphaned siblings.

“You have no choice but to mature,” he told People. “It wasn’t just about going to school and playing football anymore. My life became about five people.”

But Dunn was able to pursue his football dreams, playing college football and later signed by the Buccaneers. When he moved to Tampa, he brought his siblings to live with him.

Having achieved his dreams, he wanted to give back somehow. He thought about his mother, his siblings, and their upbringing in Baton Rouge: “We lived everywhere in Baton Rouge that you could possibly live,” Dunn recalled. “The only dream my mother had was owning her own home.”

So in 1997, he began teaming up with Habitat for Humanity to help grant homes to single mothers through his “Home for the Holidays” program. Every year Warrick Dunn Charities helps several struggling mothers with home down payments and furnishings.

“Our focus is on providing a hand-up – not a handout – to single parents and their children,” their site reads.

The program has been a dream come true for Dunn: “You see the joy, you see the kids’ faces,” Dunn told People. “You see ultimately everything my mom wanted in those guys.”

The program has been going strong for over two decades, and Dunn granted his 173rd home last month.

Like Dunn’s mother, LaToya Reedy always dreamed of owning a home for herself and her 18-year-old son AnTrez. “I got tired of paying the high rent,” she told the Tampa Bay Times. “And with renting it goes up every month.”

But thanks to WDC, Reedy was finally able to get the home she always wanted. Habitat for Humanity built a 2,000 square foot home and businesses donated money for furniture and appliances.

It was more than Reedy ever imagined: “Oh my God this is beautiful,” she said, according to Tampa Bay Times. “I love it. This is everything.”

The new home would make a huge difference in her and her family’s lives: “I can be at peace,” she said. “I can bring sweet memories to my house and I can have my family and my friends over. I have a home now, and that’s something that I’ve always wanted for my son, and for myself.”

“It’s been a long, hard journey… Struggle and sacrifices, but we made it.”

In addition to the new home being fully stocked and furnished, Dunn himself makes one very special contribution to every home he helps make: he leaves an apple pie, a favorite dish of his mother’s.

“I’ve used this program as therapy,” Dunn said. “Every time I hand over those keys there’s a little piece of my mom and the things she wanted.”

Thank you, Warrick Dunn, for your great life-changing work all these years! We know your mother is proud. Keep up the great work!