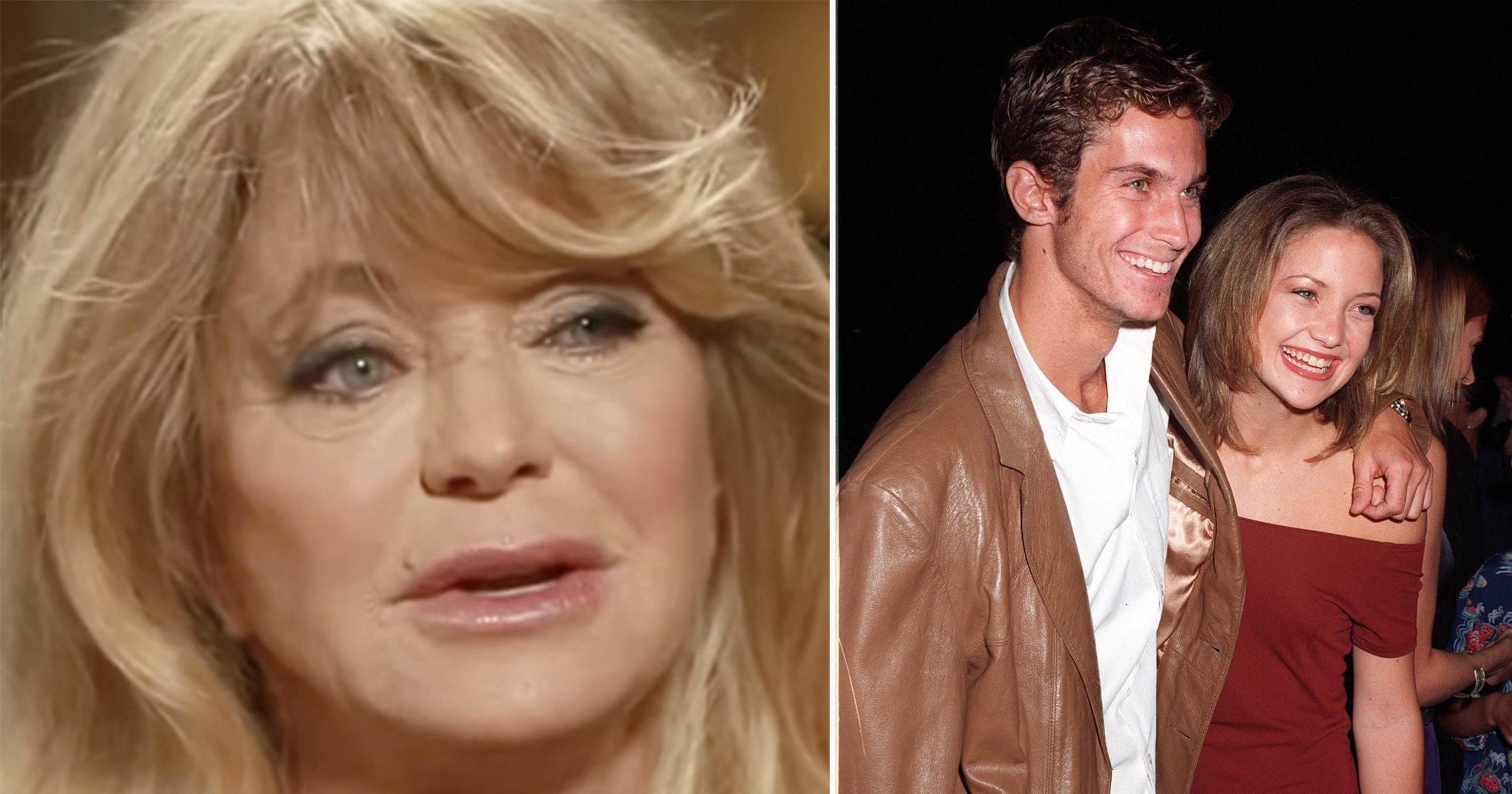 Before Goldie Hawn entered her long-lasting relationship with partner Kurt Russell, the celebrated actress married actor and musician Bill Hudson. The couple met in 1975, and later, had two children, Kate and Oliver Hudson.

But the end of Hawn and Hudson’s relationship was more than dramatic. In fact, today, the father doesn’t even speak to Oliver or Kate. The two don’t want anything to do with their father.

At the same time, Bill Hudson isn’t fond of his ex-wife Goldie Hawn either, and he revealed the truth about her in his memoir. He wrote that he was sick and tired of the image of her, adding that he got caught up in her world and is still paying a painful price.

Kurt Russell and Goldie Hawn’s love story is one of Hollywood’s finest. They met for the first time while filming The Only and Only, Genuine Original Family Band in 1966 when Goldie was 21 years of age and Russel 16.

However, it took a while before they found each other.

Goldie Hawn married actor Gus Trikonis in 1969, but the couple separated after four years. She was granted a divorce in June 1976, and just a couple of weeks later, she married musician and actor Bill Hudson.

Bill Hudson was in the band The Hudson Brothers with his brothers Brett and Mark at the time. He and Goldie Hawn met for the first time in 1975, while on a flight from New York to Los Angeles.

Hudson recalled seeing her in first class, while the band was sitting in economy class drinking.

“About 30 minutes out, I was told to go back to first to prepare for landing and my brother Brett said, ‘Hey, why don’t you go talk to Goldie? She’s hot,'” Russel recalled.

“I had a nice wine buzz on, so I went to chat to her. In the flesh she was luminous. Her skin was perfect and she had this mane of blonde hair and that wonderful throaty laugh that got you grinning the second you heard it, he added. “The attraction was instant for both of us. She agreed to see me for dinner that night.”

However, when he turned up to the restaurant for the date, Goldie Hawn was there with her then-husband Gus Trikonis.

Dramatic birth of her son

A year later Hawn divorced her first husband, and just a couple of weeks later after, she married Bill Hudson.

Oliver’s first hours in life were dramatic. He was born via cesarean section, but everything didn’t go as planned. Shortly after his birth, Goldie was told that her baby boy might not make it.

According to the doctors, Oliver had Goldie meconium aspiration syndrome. Unfortunately, the tiny infant swallowed meconium during the delivery and went into his lungs.

Oliver was rushed to the NICU, and the only thing Goldie could do was pray for his recovery. And it worked. Slowly, Oliver healed.

“I don’t think there’s any question that prayer can work. I’m a spiritual person. Although I was raised Jewish, I’m not a religious person, and I like my tribe and where I came from. But that was a beautiful thing, phenomenal,” Goldie told People in 2017.

Oliver’s life-threatening condition was severe, but today he’s a grown man with a family of his own.

“I mean, he’s such a gift. They’re all gifts, all my children,” Goldie says.

A year later Hawn divorced her first husband, and just a couple of weeks later after, she married Bill Hudson.

The couple had two children, Oliver Hudson (born in 1976) and Kate Hudson (1979). However, the story of Hudson, Hawn, and their two children would take on quite a dark turn later on in their lives.

In 1982, Hawn and Hudson got divorced. The following year, Kurt Russell met Hawn once again while filming Swing Shift. He didn’t waste any time to try and impress her, saying: “Man, you’ve got a great figure.”

One night after work, Goldie and Kurt went out – and from that day forward the two were inseparable.

But it wasn’t only Goldie Hawn that Kurt Russell had to impress. She had children Kate and Oliver, and Russel stole their hearts from the start.

Kurt Russell – the love of her life

Kate and Oliver have their own podcast named Sibling Revelry. In one of the episodes, Goldie’s children explained the moment that Kurt stole their mother’s heart.

At the time, Kate recalls being about three years old. Oliver was six. Kurt walked in and sat down next to the children, who were sharing rooms at the time.

“He sat down next to you [Oliver] first, and watched you sleep. Then came by to me. I believe he watched me longest,” Kate explained on their podcast Sibling Revelry.

Goldie and Kurt have been together for almost four decades. Despite their decades-long relationship, they’ve decided not to get married.

According to the couple, this is the reason why their bond is so strong. The kind of love and devotion they have is more than just special. At the same time, Goldie explained that the key to a healthy relationship is not to spend every single hour together.

Speaking with Cosmopolitan Magazine, as quoted by the Associated Press, back in 1986, Hawn explained the reason why she and Kurt never tied the knot. For her, marriage is “ridiculous.”

“We’re very happy,” she said, while expecting her third child.

“The child is getting the name Russell-Hawn-Russell. The kids are happy, and Kurt brought me a beautiful ring as a symbol of our love.

“Actually, owning a home, splitting down the middle – none of that really matters. You have to negate it and move on,” she added. “Otherwise, what are you investing in? Concepts, but concepts are broken with the snap of a finger. That’s why I think marriage is ridiculous.”

Goldie Hawn, Kurt, and their children were very happy and loving life, but Bill Hudson was furious.

“From the moment Kurt came on the scene my role as father to Kate and Oliver was usurped. Goldie told the kids to call him ‘Pa’. She began to craft this happy family unit,” he told the Daily Mail in 2011.

“By this time she was a major star, America’s sweetheart. She needed a ‘narrative’ and I became the big bad wolf.”

Hudson went on an emotional rampage while promoting several of his films, speaking about Goldie “walking out” on the family. He explained that he is getting very angry when talking about it, saying that her daughter Kate pretty much “aligned herself” with Goldie and fought to see his children.

However, according to Hudson, it was Goldie and Kurt that didn’t want that to happen.

“But Goldie and Kurt thwarted me at every turn. I feel they used their money to take the kids away from me,” he said.

“They used their money to take the kids”

“Kate grew up a pampered Hollywood princess. She needed some drama in her back story and I became that drama.”

The relationship between Bill Hudson, and Oliver and Kate has become very tense. It all culminated on Father’s Day in 2015, when Oliver posted a picture of the three of them, wishing himself and his younger sister Kate, a “happy abandonment day.” Further, Kate paid tribute to Kurt Russell on her Instagram page, calling him “dad” as well as thanking him for being their father.

It didn’t take long before Bill Hudson hit back on his two firstborn children, explaining that they are “dead” to him.

“I had five birth children but I now consider myself a father of three, I no longer recognize Oliver and Kate as my own,” Hudson said.

“I would ask them to stop using the Hudson name. They are no longer a part of my life. Oliver’s Instagram post was a malicious, vicious, premeditated attack. He is dead to me now. As is Kate. I am mourning their loss even though they are still walking this earth,” he said, claiming that Hawn “poisoned” the kids against him.

In his book, 2 Versions: The Other Side Of Fame & Family, Bill Hudson lashed out at Goldie Hawn, saying she’s “manipulative, cruel and selfish.”

Further, he suggested that he got caught up in Goldie Hawn’s world, and is still paying a painful price.

“I never wanted to get into a public slanging match but I have other children now and they deserve the right to get to know Kate and Oliver and I want the world to know the truth about Goldie,” Hudson wrote.

Kate Hudson: “I forgive him”

“I am sick and tired of her portraying this squeaky-clean image to the world when the reality of her life is so different, I have done this book because I want to show the flip side of the Hollywood dream.

In 2016, Kate Hudson spoke on SiriusXM, thanking Bill for “abandoning” her and her brother Oliver.

“We can sort of laugh at what the challenges that we faced together,” she said. “I actually feel like it was a blessing. And no matter what [Bill] goes through, I am all forgiveness.”

A year later, Hudson told Howard Stern about her relationship with Bill, “I really do recognize whatever those issues are, it’s just something that he has to live with, and that must be painful for him, so I forgive him.”

The relationship between the three sure isn’t the best. However, Oliver said that he and his father reconnected at one point, sending texts back and forth.

But when it comes down to it, it seems like Bill really doesn’t want anything to do with Kate.

Bill Hudson moved on from his marriage with Goldie Hawn, tying the knot with Cindy Williams in 1982. They welcomed three children Emily Hudson (born in 1982), Zachary (1986), and Lalania (2006).

Even though Kate and Oliver don’t want anything to do with Bill, they have four siblings – including Goldie and Kurt’s son Wyatt Russell.

Wants to reunite with step-siblings

Kate explains on her and Oliver’s podcast that she wants to reconnect with their half-siblings. And who knows, it might be a way to get back with their father as well.

“I was thinking about how everybody’s getting older,” she said on their podcast. “I just had this moment of like, it would be nice to connect a little bit, especially with my sisters.

“We’ve been talking so much about sibling relationships, and distraught relationships,” Kate Hudson continued. “And we’re sitting here like, we’ve got the best family, we’re so great. And yet, we don’t ever acknowledge the fact that we have four other siblings — four. So I’ve been thinking a lot about the Hudsons. Thinking that it’s important that we reach out with all of our siblings and maybe connect with them a little bit.”

Only time will tell if Bill will reunite with his children, as well as Goldie Hawn. However, it seems like both Hawn and Bill Hudson have plenty to do as they both have grandchildren.

What do you make of all this? Do you think Bill is doing the right thing or not? Give us your thoughts in the comment section. Meanwhile, share this article on Facebook with friends and family!