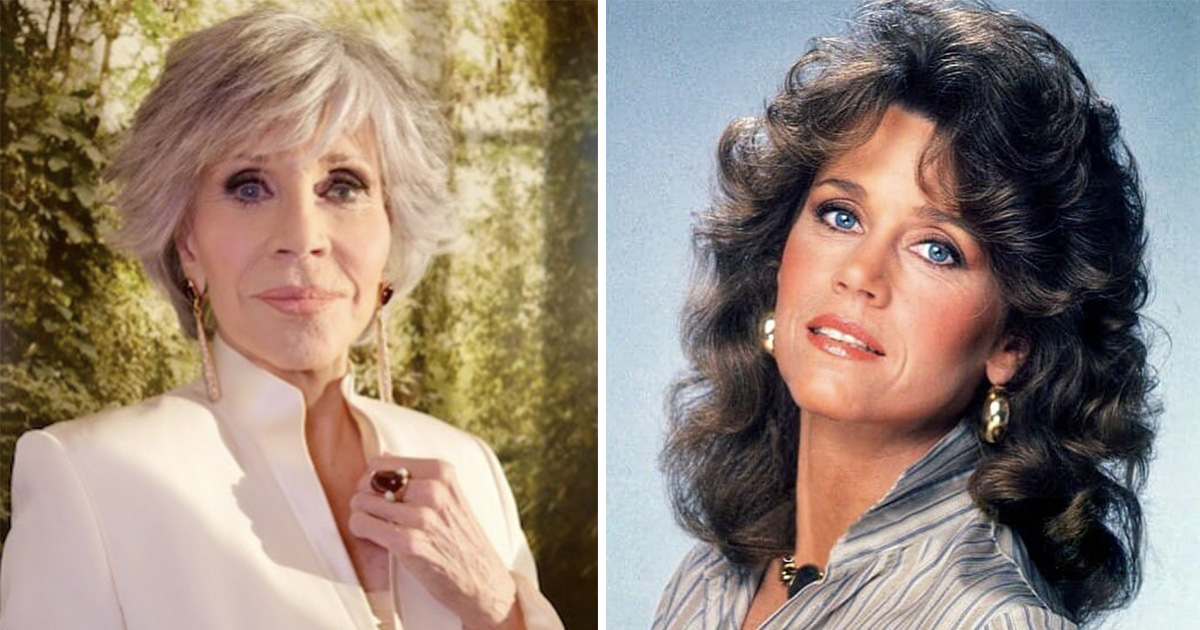 Jane Fonda has been in the Hollywood spotlight for six decades. Still to this day, she tells stories through her magnificent performances, and is still out there winning big awards, new fans, and adulation.

Last week, the 83-year-old received her eighth Golden Globe, and got it while wearing an outfit that people can’t get enough of.

Few actors have been praised for their performances on stage as Jane Fonda has. At the same time, she’s also dedicated large parts of her life to helping others.

Even though Jane Fonda has won some of the biggest awards over the course of her career, she’s also gotten into quite a lot of trouble for her devotion to several social causes.

But no matter what, you can safely say that she’s lived a very special life. She grew up as the daughter of Henry Fonda and went on to become one of the greatest movie stars in the world.

Here’s all you need to know about Jane, and just why her Chic white suit from the Golden Globes has created such a buzz on social media.

One might think that nothing could go wrong as the daughter of Henry Fonda. However, Jane Fonda’s childhood was struck by tragedy; her mother took her own life when Jane was only 12 years old.

Born Lady Jayne Seymour Fonda on December 21, 1937, in New York City, as a young girl she was an entertainer who always acted. But Jane Fonda’s acting wasn’t just about her love for the profession. Rather, it was about fitting in.

“As a child, climbing trees was my thing. At the top of an oak tree, I could hear triumphal music, and I could see myself, like Joan of Arc, leading armies up the side of a hill. I was a conqueror,” she told Oprah.

“Then when my family moved to Greenwich, Connecticut, I became this itty-bitty little thing. And all I thought about was being too fat and too shy, and the tomboy turned into someone who was trying to figure out how to fit in and look girlish, and it was horrible.

“So the second part of that first act was about being popular. Being loved. Becoming an actress. Trying to be loved by multitudes if I couldn’t be loved by one.My second act was about becoming an activist,” she added. “That took me closer to my core. And the third act is about finding my voice. It’s about who I really am on my own, not in relation to somebody else or in trying to please somebody.”

Jane Fonda’s father, Henry Fonda, is recognized as one of the biggest movie stars in history, having enjoyed a career that spanned over five decades. For Jane, though, she didn’t get the father she needed, especially after her mother took her own life.

Besides fighting to get the approval of her father, she also battled bulimia up until her mid-thirties.

“My father didn’t verbalize much, but I knew he had regrets, and I don’t want to,” Jane Fonda says.

“I want to have people around me who really love me, whom I really love. And I know that you can’t collect those chips unless you’ve earned them during your life. What that said to me was that I had one act left to make sure I didn’t get to the end with regrets.

“What would I regret the most? My big regret would be if I’d never had an intimate relationship. But if you never grew up with intimacy, if you were never with parents who really loved each other, and you never saw that and absorbed it as a kid, it’s hard to know how to do it.”

Jane Fonda went to Vassar College, but decided to leave for Paris to study art. Upon coming back to the US, she did some modeling, before joining her father in the acting business.

In 1954, Jane Fonda co-starred with her father in a The Country Girl production. Six years later, she made her film debut in Tall Story.

Jane Fonda loved the theater, receiving a Tony Award nomination for her performance in There Was a Little Girl. At the same time, though, she slowly gravitated towards the film business. Once there, she quickly became a super star.

Tall Story was Fonda’s breakthrough, and soon after, her career skyrocketed. In 1969, she received her first Academy Award nomination for her performance in They Shoot Horses, Don’t They. Two years later, it was Jane Fonda’s turn to get up on stage.

Fonda continued to deliver strong performances on screen, but at the same time as she rose to fame, she was also involved in political and social activism.

During the Vietnam War, she travelled to North Vietnam during the height of the anti-Vietnam War protests, posing for photos next to an anti-aircraft gun. For this, she was heavily criticized. She later repeatedly apologized for posing for the photos, which gave her the nickname “Hanoi Jane”.

Fonda has made a big impact off-screen by creating different organizations to support women’s equality, as well as prevent teen pregnancy. In 1982, she released a workout video and was also active on behalf of different liberal political causes.

During her long and celebrated career, Jane Fonda has also won seven Golden Globes. The eighth one, which she took home this past week, was something special indeed.

During the 2021 Golden Globes, Fonda was honored with the Cecil B. DeMille Award, which is given annually to an “individual who has made an incredible impact on the world of entertainment.”

Stars like Tom Hanks, Oprah Winfrey, Meryl Streep and Lucille Ball have been honored with the award in the past. Fonda is the 16th woman to receive the award, which is the association’s highest honor for a film professional. It has been given out since 1952.

“He would be very proud of me,” Fonda said backstage about her father, according to PageSix. “I feel that he is here. I feel his spirit.”

Fonda has been known to use her speech platforms to acknowledge human rights, climate change and global peace, as well as colleagues of hers. In her most recent Golden Globes speech, Fonda addressed the diversity issues inside of the Hollywood Foreign Press Association, which votes on the awards. Before the show, it was a well-discussed topic after it became evident that the association did not have a single black member.

Jane Fonda said Hollywood has been “afraid” to tackle its diversity problem, saying that the industry must be more inclusive.

“But there’s a story we’ve been afraid to see and hear about ourselves in this industry,” Fonda said.

“A story about which voices we respect and elevate – and which we tune out. A story about who is offered a seat at the table and who is kept out of the rooms where decisions are made.”

Jane Fonda didn’t only get plenty of attention for her speech. Also, the now 83-year-old once again – like many times before – was praised for her amazing outfit. Not only because of how beautiful she was, but also because there was a reason for her wearing that exact suit.

She already had the outfit in her closet, and speaking on the Ellen DeGeneres show, Fonda said more people should reuse their clothes.

“Well, I prefer this kind of outfit than getting dressed up,” Fonda said, as quoted by People. “I vowed a couple of years ago I would never buy any new clothes again. We spend too much money, we buy too many things, and then we get rid of them, we try to develop our identity by shopping, right? We gotta stop that. Stop all this consumerism.”

“So I had to go through my closet and find out something that still fit me and I have worn before, and I found something. I’m all set,” she added.

During the 2020 Oscar’s, Fonda did the same thing by wearing an outfit which she first was seen wearing at the International Cannes Film Festival in 2014. Even the biggest stars like Fonda – with plenty of money in the bank – reuse their fancy clothes. And she sure looks amazing showing off her classy look.

It’s quite normal to encounter certain health problems when growing older. Of course, the now 83-year old Jane Fonda has been no exception to this rule.

“I have a fake hip, a fake knee, and I’ve had a number of back surgeries, so I’m sort of half-metal and half-bionic now,” she told the Daily Mail. “I have osteoarthritis and getting in and out of a car is a challenge. But I feel lucky that I did a lot of fitness work earlier in my life because it means I’m stronger now.”

Despite all this, Jane continues to keep an active lifestyle. The key is to persist, no matter how slow you go, she says. Fonda take long walks every day, as well as engaging in activities such as resistance training, yoga, and cross-country skiing.

“I’m never going to stop. The most important thing is to keep moving, to stay active. That’s what I do and that’s how to stay strong,” she said.

According to Jane, too many people who are ageing just give up at some point. But there is no need for it.

“The mistake that so many people make is that if they can’t do what they once did, then they don’t do anything. Big mistake.”

Instead of just stopping, one should adjust their workouts to be age-appropriate, she claims. Instead of running one can, for example, walk instead. One can also continue to weight lift, but use lighter weights and move at a slower pace instead.

“Keeping your body active is absolutely critical. If you’re in a wheelchair, move your arms,” she said.

Jane has proven an incredible gusto for life and seemingly limitless amounts of energy. At 83, she’s still not ready to retire.

“I support other people besides myself and I need to bring in money. Plus, it’s fun. I never would have thought that at my age I could say I’ve been working too hard to spend time pampering myself, but I’m happy to say that’s the case.”

However, Jane is quick to point out that she does not take her energy for granted.

“If you had told me when I was 20 or 30 that I would still be acting at 80 on a show like Grace and Frankie, I would have said, ‘You’re out of your mind,’ ” she told Ellen DeGeneres. “I didn’t think I’d live this long. Every day I get up and I want to pinch myself. I feel very blessed.”

Her best tip is to not try to be perfect … it’s simply impossible.

“It’s a losing battle and you’ll just be unhappy,” Fonda said during an interview with Healthy Living. “Your anxiety will drive you to do things like eat too much or drink too much or whatever.”

Instead, Jane suggests taking the time to seek meaningful relationships with others.

“I meditate for 45 minutes to an hour every day,” she said. “That keeps me calm and grounded. Trying to be intentional about how we live, staying interested, staying curious, paying attention to young people, cultivating young friends — these kinds of things are, I think, important to staying youthful.”

Jane Fonda is a living legend, and we still love seeing her on the big stages. Also, doesn’t she look absolutely amazing in her white Golden Globes suit!