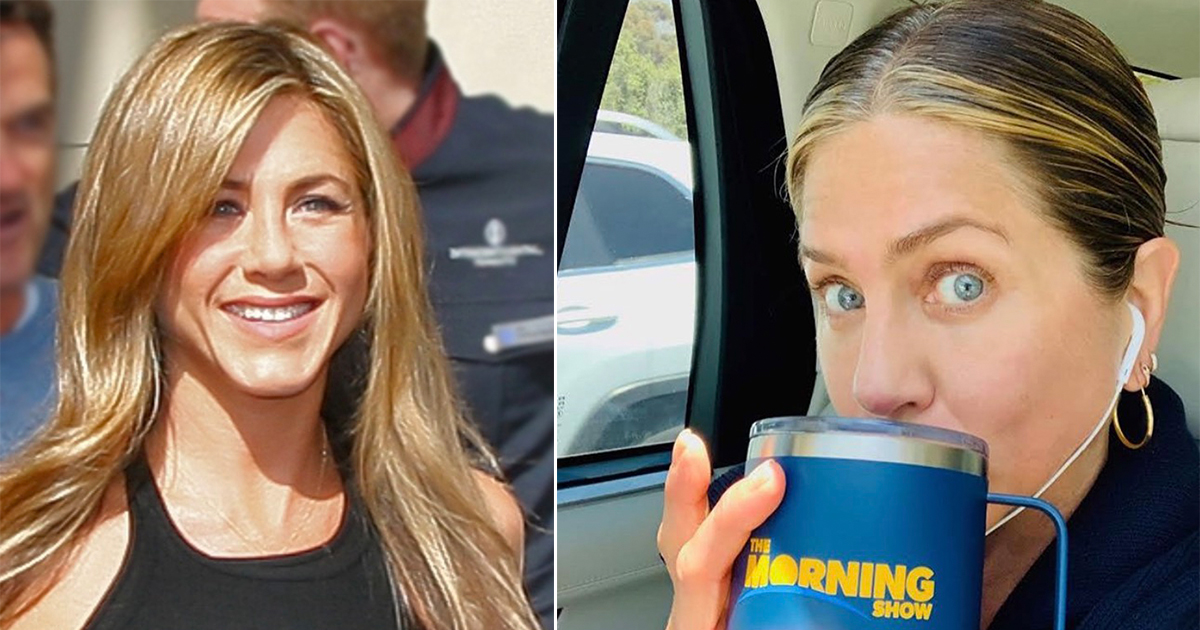 Jennifer Aniston is a woman I have great respect for and really admire.

She has gone through a lot during her career and paid a high price for a life in the public eye. Sure, some might say it comes with the job – but getting your love life dissected in the gossip magazines is not exactly what you dream of.

Personally, I think Jennifer has aged with grace – it feels like she’s become more gorgeous, harmonious and wiser in recent years. The 51-year-old actress is of course more than just her appearance, but I love when she sports a more natural look – something that happens a little now and then.

That’s why when I stumbled upon some pictures of Jennifer without makeup showing a mark on her face, I was very surprised to learn the real truth behind the photos …

You can easily get the impression that Jennifer Aniston is a person who has everything in life – she’s one of the highest paid highest-paid actresses in the world and she lives a life that few even dare to dream of.

But she actually knows a thing or two about hard work – nothing has come for free in Jennifer’s life.

Jennifer Aniston was born in 1969 in Sherman Oaks, Los Angeles. She had acting in her blood – both her parents worked in the entertainment industry.

But that didn’t mean a free ride to Hollywood for Jennifer. As a child, she moved to New York and discovered acting after entering a Waldorf school.

Jennifer’s father, John Aniston, a famous actor at the time, didn’t always encourage Jennifer and her on screen ambitions. For example, he wouldn’t let Jennifer watch television from time to time.

”I was enrolled at the Rudolf Steiner School, which recommends that children don’t watch TV. I’d sneak it all the time, of course. You become obsessed with anything your parents tell you not to do,” Jennifer said in an interview in 2007.

Jennifer struggled in high school and the teachers threatened to kick her out.

”It was the school part of high school that I really had a problem with. Otherwise there were some great times,” she said.

As an upcoming actress, Jennifer had several ”normal” jobs. She worked as a waitress, telemarketer and bike messenger – trying to make ends meet.

“I had moved away from home. I had been on six failed television shows. I waitressed for years in New York before I got anything. And I was a telemarketer selling time-shares in the Poconos. I didn’t make one sale. I was terrible at it. I was like, ‘Why do we have to call people at dinnertime?’,” she told Harpers Bazaar.

After several unsuccessful efforts in various films and series, Jennifer finally got rewarded for all the hard work.

As everyone knows, Jennifer got her big break when she was cast for ”Friends” in 1994. She plays Rachel Green and the series would go on to become one of the most popular comedy series ever.

”I’d done about seven hundred failed shows before Friends, and there was no reason to believe that Friends would be any different. Right before it aired, the director, Jimmy Burrows — or Papa, as I call him — flew the six of us to Las Vegas. He took us out to dinner and said, “You don’t know what you’re about to embark on. You better take care of each other,” Jennifer said.

Her role as Rachel was later recognized as one of the greatest female characters in American television. Thanks to ”Friends”, Jennifer also became one of the highest-paid actresses in the world and received a star on the Hollywood Walk of Fame.

And she didn’t become any less famous when it was revealed that she was dating another of Hollywood’s hottest figures – Brad Pitt.

The couple met in 1998 and married two years later. Every millimeter of their marriage was covered in the press and many saw their relationship as the ultimate love story.

Sadly, the couple divorced just five years after the wedding, prompting intense speculation about why their relationship ended.

Many believed that Brad had been unfaithful and that he wanted a divorce because Jennifer refused to have children with him.

“I’ve never in my life said I did not want to have children. I did and I do and I will! … I would never give up that experience for a career,” Jennifer told Vanity Fair.

Of course, the divorce from Brad Pitt was a hard blow to Jennifer. It wasn’t fun to break up and tackle all the speculations – but in retrospect, Jennifer has talked a lot about their relationship and called it ”beautiful but complicated”.

Brad Pitt has also spoken out about their marriage and his feelings for Jennifer Aniston.

“Jen is an incredibly giving, loving, and hilarious woman who remains my friend. It is an important relationship I value greatly, ” he told Reuters in 2011.

Today, the marriage to Brad Pitt is history and Jennifer has moved on. Over the years, she has appeared in all major magazines, including a high-profile photoshoot with Harper’s Bazaar. Sen has been hailed as one of the most beautiful celebrities in the world.

But in recent years, Jennifer has spoken openly against the appearance fixation that exists in the entertainment industry. She has criticized the objectification of women in Hollywood and in the tabloids.

“The objectification and scrutiny we put women through is absurd and disturbing. The way I am portrayed by the media is simply a reflection of how we see and portray women in general, measured against some warped standard of beauty,” she wrote in an essay for The Huffington Post.

As a counterbalance to this, it has also become something of a trend for Hollywood celebrities to show their face without make up.

Jennifer has also showed her natural look and, of course, she’s just as beautiful without make up. Just look at the makeup-free selfie below that Jennifer posted on her Instagram last year.

Jennifer was praised for the picture and got over 3 million likes. And I can really understand why – it’s so important that famous people show that they are only human after all.

This year, Jennifer has continued to post pictures of herself without makeup and urged people to wear masks.

A few years ago, however, many of Jennifer’s fans became worried when a picture was published of her without makeup where you could see a large wound over her cheek.

It caused a torrent of speculation, but fortunately it soon became clear that the scar was not real. The photo was taken on the set of the movie Cake, in which Jennifer plays a woman suffering from chronic pain. The woman is left with a large scar after a car accident.

Jennifer enjoyed doing a role without having to use a lot of make-up.

“It was so empowering and liberating to just put scars on my face. The only time I had to sit in the makeup chair was just for scars,” she told E!Online.

As for the movie – Jennifer’s once again delivered a performance that received positive reviews. Her role in Cake brought her nominations for the Screen Actors Guild Award and Golden Globe Award.

Whether she wears makeup or not, Jennifer Aniston is a stunningly beautiful person and a very talented actress. Thank you for all the laughs and fantastic performance over the years!