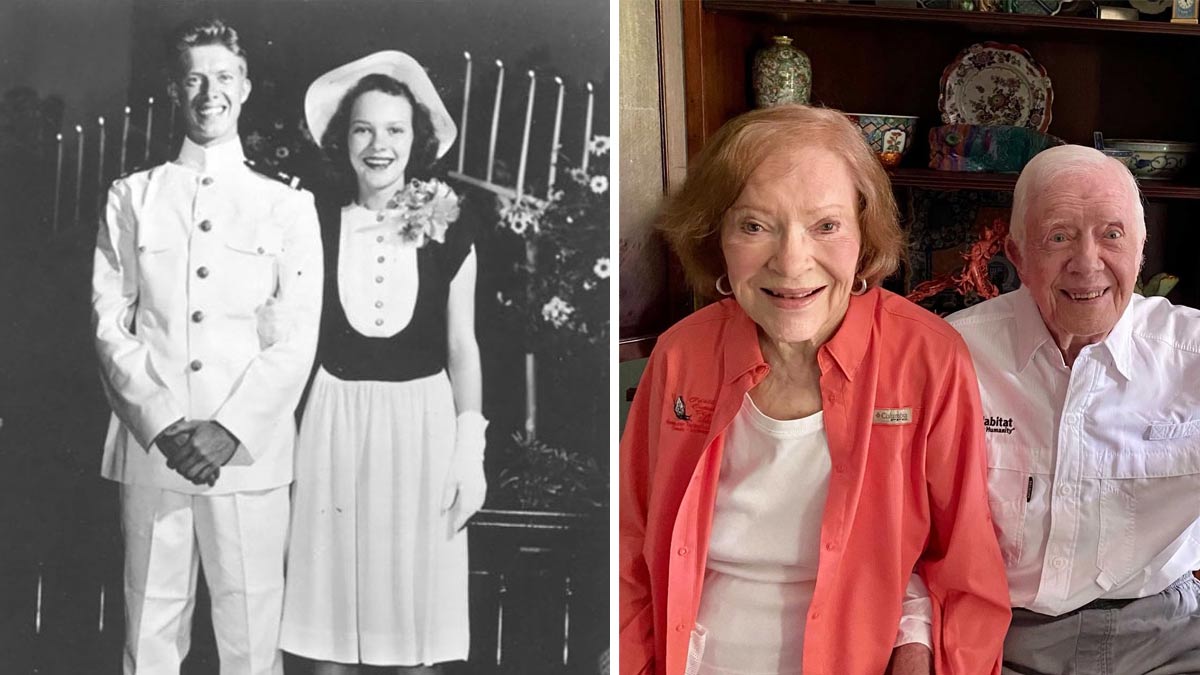 The longest living married couple in the United States have been married for 85 years, and currently the Carters hold the title for the longest-married presidential couple at 75 years.

Previously, former President George H.W. Bush and former first lady Barbara Bush held that title. When Barbara died in April 2018, the Bushes had been married for 73 years and 111 days.

The Carters married on July 7, 1946 in their hometown of Plains, Georgia where the two nonagenarians still live.

And that’s where they’ll celebrate their milestone anniversary. The couple will be the center of attention when guests come to gather in Plains to toast to the Carters.

“We have too many people invited,” Rosalynn said. “I’m actually praying for some turndowns and regrets.”

His mother had taken him to see their neighbor’s new baby, Rosalynn. Little did anyone know that the two would get married.

As Rosalynn got older and became friends with the neighborhood kids, she became friendly with Ruth Carter, Jimmy’s sister.

She remembered Ruth kept a photo of her brother on her bedroom wall, and Rosalynn “fell in love with that picture.”

“Mother always said I married him because of his uniform,” she said.

Jimmy, 96, first met Rosalynn, 93, when he was home on break from the Naval Academy.

He felt they were a match and asked her out on a date.

“She was beautiful and innocent, and there was a resonance,” he told People.

Although there was some initial pushback from Rosalynn – she continued to date while attending college – the two eventually wed one month after she graduated.

She reportedly promised her father while he was on his deathbed that she wouldn’t marry before she finished school, and she made sure to keep her promise.

The beginning of their marriage found them moving around the country as Jimmy was assigned deployments in either the Atlantic or Pacific fleets. And while one may think the spouse of someone in the United States Navy may not like the constant moving, Rosalynn didn’t mind at all.

“I had been self-sufficient and independent from my mother and Jimmy’s mother,” she told The New York Times.

So when Jimmy told her he was giving up his career in the Navy so they could grow their family in Plains, Georgia, she was annoyed.

It was a move – making tough family decisions – Jimmy said he regretted.

But their disagreements never lasted long.

In 2012, Jimmy joked that the couple’s worst decision they ever made was when they wrote a book together.

“It’s the worst problem we’ve ever had since we’ve been married,” Jimmy joked to Piers Morgan.

Imagine that being your biggest problem!

Anyone would find it difficult to make to 75 years of marriage, not just because of the stresses of every day life, but not everyone is fortunate to live long enough to celebrate such a milestone.

But the Carters have been by each others’ side through it all.

Rosalynn was there throughout Jimmy’s presidency where she became his closest adviser. After the they left the White House and the couple returned to the home they built in Plains, Georgia, it was Rosalynn who managed the family peanut business.

In later years when Jimmy battled cancer, a battle few thought he would survive, Rosalynn was by his side.

So how exactly have the couple been able to survive the trials and tribulations of 75 years of marriage?

They say it all comes down to a few simple things.

The two never go to bed angry, they share several hobbies like building houses for Habitat for Humanity and bird watching, and they also enjoy the much simpler things in life like appreciating each other’s company.

However, they also respect each other’s space.

“Jimmy and I are always looking for things to do together.” Rosalynn said. “Each [person] should have some space. That’s really important.”

And just because they’ve been married for more than seven decades doesn’t mean their love for each other has become stagnant. If anything, it has continued to grow and flourish.

“I know for my sake,” Jimmy said, “it’s been the best thing I’ve ever had happen to me — marrying Rosalynn and living together for so long, growing to know each other more and more intimately every day in married life.”

“I’ve been very happy,” he said. “and I love her more now than I did to begin with — which is saying a lot, because I loved her a lot.”

Happy 75th anniversary to Mr. and Mrs. Carter! May you celebrate many more happy years together.

Share this story on Facebook and wish the former president and former first lady a happy anniversary!