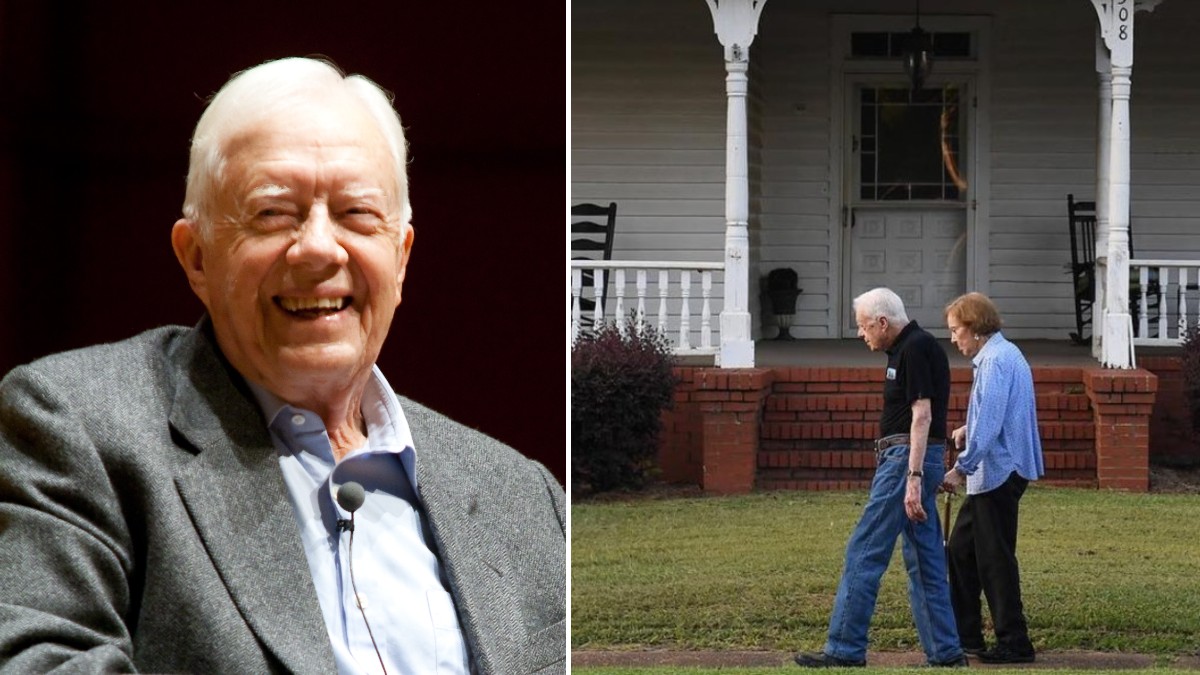 When a president leaves the White House for the final time while they may be moving out of the grand ol’ house at 1600 Pennsylvania Avenue, they may not necessarily be leaving behind the lavish lifestyle.

Carter, 96, who is currently the oldest-living former president, has lived a rather modest life ever since he handed over the presidency to Ronald Reagan in 1981.

After serving just one term, Carter and his wife Rosalynn, 93, who will celebrate their 75th wedding anniversary this year, moved back to the home they built in the 1960s in Plains, Georgia.

Plains was a small town of about 600 people where Carter’s father was a successful businessman and investor in farmland. His mother worked as a nurse at the Wise Sanitarium, where Carter was born.

Carter attended the local high school from 1937 to 1941, and like his father who served in in the U.S. Army Quartermaster Corps during WWI, he dreamed of joining the military.

He began attending Georgia Southwestern College, but transferred to Georgia Institute of Technology and later gained admission into the Naval Academy in 1943.

It was during his time in the Naval Academy that he met Rosalynn through his sister Ruth.

“I just felt compatible with her,” he said in Phil Donahue and Marlo Thomas’ book What Makes a Marriage Last, according to People.

The two went out on a date – to see a movie – and from there the rest if history!

They married in 1946, shortly after Carter graduated from the Naval Academy.

For the next several years, the young couple found themselves moving around the country as Carter was assigned deployments in the Atlantic or Pacific fleets.

Just as the Navy was set to construct its first nuclear-powered submarine, which Carter was going to be a part of, his father became ill and died from cancer in July 1953.

Although it was a difficult decision, Carter eventually left the Navy with the rank of lieutenant to continue the family business as a peanut farmer.

By the time he and Rosalynn moved back to Plains to settle down as a family, they already had three children.

With a growing family – their fourth child was born in 1967 – the Carters were in need of a home, so he built his family a ranch-style house in 1961.

The house, which according to Zillow is currently valued at $209,996, was perfect for the Carters before Jimmy became involved in politics and it remained the ideal home for them once he retired from politics.

After the former 39th president moved out of the White House, he didn’t rush to a new home or sign book deals that would bring him in millions of dollars. He went home to Plains, Georgia.

According to the Washington Post, he returned to his roots because he didn’t want to “capitalize financially on being in the White House.”

Gerald Ford, the 38th president, is said to have been the first to have taken advantage of such opportunities, but “Carter did the opposite.”

However, many of his successors and their spouses have taken advantage of post-presidential popularity, which Carter takes no issue with. It’s just not for him.

“I don’t see anything wrong with it; I don’t blame other people for doing it,” he said. “It just never had been my ambition to be rich.”

And it’s true. After he returned to his peanut business, he struggled. His business was $1 million in debt, and he had no other option but to sell.

So, like many who find themselves in a bind and have lived a life worth sharing, he began writing. He wrote about everything from his life and career to peace in the Middle East.

Between the income he receives from the more than two dozen books he’s written and the $217,000 annual pension, he and his wife are able to live a comfortable life.

Yet, for the most part they still choose to live quite the modest life.

A 2011 Rolling Stone interview revealed that he purchased his clothes at the local Dollar General. He has also been known to fly commercial rather than private when he travels.

According to the 2019 fiscal year budge from General Services Administration, Carter cost taxpayers $456,000 compared to $952,000 that was budgeted for former president George H. W. Bush.

The budget included pension, an office, staff, and other miscellaneous costs.

As his successors would go on to join advisory boards, speak at conferences, and in a way live their life as a celebrity, Carter contributed to his community, and often at no charge, in other ways.

Shortly after leaving the White House, Carter began teaching at Emory University, and after 37 years of teaching he was granted tenure.

He also taught Sunday school at Maranatha Baptist Church. One of the only times he missed class was when he underwent surgery to treat a subdural hematoma in 2019.

The former president, who built his own home in 1961, has also been associated with Habitat for Humanity for many years. Throughout the years he’s helped renovate 4,300 houses in 14 countries.

“I’m not being modest here, trust me. I’m not being humble. I’m being honest. He’s going to outwork you every time he comes on the job site,” Garth Brooks told Yahoo.

Over the years the Carters’ home has undergone some renovations, which Rosalynn said they handled themselves because at that point they had spent so much time building houses with Habitat for Humanity they knew what they were doing.

But for the most part, the inside looks exactly as you’d expect. Warm and cozy.

When Carter isn’t helping others, he’s at home relaxing or over a friend’s home enjoying a nice meal on a paper plate, no less, or talking a stroll with Rosalynn through town.

Despite having lived what some may have called a grandiose life for four years, Carter returned to his roots to live out the rest of his life.

“We feel at home here,” Carter said of Plains. “And the folks in town, when we need it, they take care of us.”

Will we ever see another former president embrace small town living? Well, we can’t predict the future!

But it sure would be nice to see someone like Jimmy Carter return to their roots and use their influence to continue to help their community.

Thank you Jimmy Carter for continuing to be an inspiration.