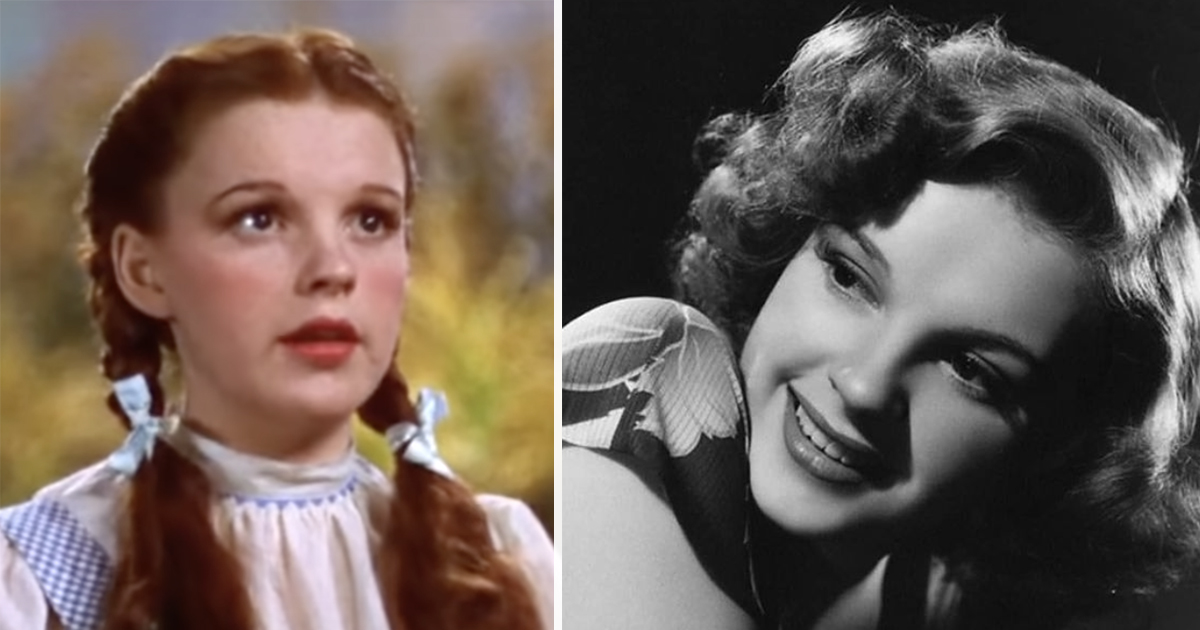 Judy Garland is remembered as one of the most beloved Hollywood actresses and singers of all time. Over the span of her career, she had major success on screen, even if that wasn’t necessarily for her own good.

In fact, Judy Garland’s life, both professionally and private, was a rollercoaster of sad events that weren’t her fault. In short, she suffered due to the pressure both her family and the film studios put on her shoulders.

So what really happened to Judy Garland? And how did she enter show business in the first place? This is the full story!

Early in her life, Judy Garland traveled down the yellow brick road and became a mega Hollywood star. The actress and singer lived virtually all of her years in show business, starting when she was only a couple of years old.

Event though Hollywood during the 50s and 60s sure looks like it was taken out of a Cinderella story, it wasn’t all sunshines and roses for some.

Judy Garland became what some would term a victim of show business. And to be honest, she didn’t have much of a choice.

Her studio reportedly forced her to work long hours, even though she still was a little girl, and pretty much wore her down at a time in her life when she was in desperate need of support.

Garland lived a life filled with pills and stress, none of which was helped by her not-so-supportive family. But in the end, it’s our job to salute and honor her as the wonderful person she was deep inside, both on and off the screen.

So how did Judy Garland even enter show business? And what became of the legacy she left?

Her name at birth was Frances Ethel Gumm, and she was welcomed to the world on June 10, 1922 in Grand Rapids, Minnesota.

As a young girl, she was called “Baby Gumm”. Her parents were vaudeville professionals, and as a result, Garland also became familiar with the stage at a very young age.

When she was just two, she sang “Jingle Bells” at her first public performance. Soon after, she began performing with her two older sisters, together forming the group the “Gumm Sisters”.

It’s said Garland knew from the beginning that she wanted to be a movie actress, singer and a dancer when she grew up. In reality, this was something she’d been told by her mother, Ethel.

Ethel pushed all three of her children into show business, and the results weren’t pretty. Ethel had a vision and a plan for her daughters, regardless of if the girls wanted to accommodate or not.

However, it soon became clear that Judy was the one with the most talent, and so she got most of the recognition.

Speaking with Barbara Walters in 1967, Garland said her mother was really a “mean” stage mother.

“She was very jealous because she had absolutely no talent,” she said. “She would stand in the wings, and if I didn’t feel good, she’d say, ‘You get out and sing or I’ll wrap you around the bedpost and break you off short!’ So I’d go out and sing.”

When Judy was only four years of age, she, her sisters and her mother moved to California. Rumors said that her father had affairs with others might have affected Ethel’s decision. As for Judy’s career, this turned out to be a great move.

California was the center of show business at the time. Sure, music would come to move its “capital” to New York in the 1960s – then back to California in the ’70s – but during the ’20s, California, especially Los Angeles, was the place to be.

“As I recall, my parents were separating and getting back together all the time. It was very hard for me to understand those things and, of course, I remember clearly the fear I had of those separations,” Garland recalled of the time.

Judy was already a performer when her family moved to California. Some of the places they visited weren’t particularly appropriate for children, but that wasn’t anything Garland’s mother concerned herself with.

When her mother performed, Judy would oftentimes join on stage with her sister. The Gumm Sisters became The Garland Sisters in 1934.

Judy was heavily pressured by her mother to always perform, irrespective of heath or well being. In fact, her mother, Ethel, was the first person to provide pills to her talented daughter, according to Judy’s biographer Gerald Clarke.

From the time that Judy was 10, Ethel prepared pills for her to “keep the girls gong!” on auditions, as well as on the road. Later at night, she gave her daughters sleeping pills to calm them down. Garland later characterized her mother as “the real Wicked Witch of the West” – referencing to the villain in one of her most beloved films, The Wizard of Oz.

At the age of 10, Judy Garland started touring the US as a solo act. Three years later, her life would change forever as he was signed to the MGM studio. Garland auditioned in front of the film studio’s co-founder, Louis B. Mayer, and he was absolutely blown away.

Mayer was stunned over how beautiful Garland was while singing, and he didn’t even asked her to do a screen test. Instead, he signed her right there and then.

Now, this might seem like the most wonderful of dreams for any young talent hoping to pursue a career in show business. Getting a studio contract at the age of 13 isn’t something that just happens – and it was clear that Judy Garland was very special.

However, hers wasn’t to be a wonderful experience full of smiles, support, and love. No, instead, Garland walked into a living nightmare – one that would haunt her for the rest of her life.

From the start of her studio career, it was like MGM owned all the rights to Judy Garland. And in one way, they did, as they owned all the artistic work she was a part of

Judy knew something was very wrong. Sure, it was a different era, where ideals were different, but she knew things were being taken way too far.

MGM starved Judy Garland, and pushed her to the limits. They forced her to lose weight, and at the same time, facilitated the start of what would become a lifetime dependency of pills.

At times, Judy Garland worked six days a week, and up to 18 hours a day. In order for her to do so, her studio gave the teenager pills in the form of amphetamines, and later on sleeping pills to help her calm down. It became one of the most scandalous stories of the old Hollywood world.

Judy Garland was both prescribed with stimulants and depressants. She herself claimed that this was a direct order from the studio head, Louis B. Mayer, who had signed her. At the same time, she didn’t live a life as any other regular teenager, going to high school and spending time with friends.

Instead, Garland was thrown into a world of parties with the likes of Clark Gable and Lana Turner, as well as attending film premieres.

“They had us working days and nights on end,” Judy recalled as quoted by Independent. “

They’d give us pills to keep us on our feet long after we were exhausted. Then they’d take us to the studio hospital and knock us out with sleeping pills – Mickey (Rooney) sprawled out on one bed and me on another.

“Then after four hours they’d wake us up and give us the pep pills again so we could work 72 hours in a row. Half of the time we were hanging from the ceiling but it was a way of life for us.”

Garland was, as mentioned, starved at the MGM studio. Since they held concerns over her weight, she even had food taken away from her. As a result, she was constantly hungry, and the horrible treatment made her insecure about her body for the rest of her life.

Charles Waters was a director who worked with Garland at the time. He, according to the Independent, called her “the ugly duckling” of the industry. He later claimed that the way the studio treated her had a “damaging effect” on Garland.

“I think it lasted forever really,” he said.

Judy Garland herself said the orders for her to be supplied with pills were coming straight from the top boss, Louis B. Mayer. However, Mickey Ronney – whom she later worked with – at one point denied Judy’s version.

“Judy Garland was never given any [pills] by Metro-Goldwyn-Mayer. Mr. Mayer didn’t sanction anything for Judy,” Rooney said, as quoted by PBS. “No one on that lot was responsible for Judy Garland’s death. Unfortunately, Judy chose that path.”

We could spend hours speaking about the wonderful career of Judy Garland. She gave us brilliant performances in classic films such as The Wizard of Oz, Meet Me in St. Louis, Babes on Broadway, and, of course, her comeback film A Star Is Born in 1955, for which she was nominated for an Academy Award for Best Actress.

But at the same time, it’s more important to actually speak about the awful things Judy Garland was forced into, things that forever changed her life and ultimately led to her death.

As time went by at MGM, with her being supplied with pills regularly, she started to drink alcohol, too. Long before her 30th birthday, Judy had developed problems while working, and stumbled through lines and songs.

But in the end, who could blame her for it? Having been raised the way she was, both by her mother and later on by MGM, she didn’t know anything else.

Still to this day, her case remains the perfect – and tragic – example of how show business, especially in those days, held secrets both dark and sketchy. Ultimately, Garland was seen as product – not a human.

“I do think my mother was a victim of the studio system,” Judy Garland’s daughter Lorna Luft told People. “But it also gave her the ability to channel her talent to all of us. It was a real double-edged sword.”

Judy Garland passed away on June 22, 1969, after her then-husband Michael De Vinko had broken through her locked bathroom door and found her lifeless. She was only 47 years of age.

According to PBS, Scotland Yard’s Gavin Thurston conducted an autopsy of her body. The cause of death was listed as “Barbiturate poisoning (quinabarbitone) incautious self-overdosage. Accidental.”

“This is quite clearly an accidental circumstance to a person who was accustomed to taking barbiturates over a very long time. She took more barbiturates than she could tolerate,” Thurston said.

Still to this day – and for all the days to come – we look at Judy Garland and think of a legendary actress and singer who brought and brings smiles to people’s faces everyday.

We will never forget you, Judy. May you rest in peace.