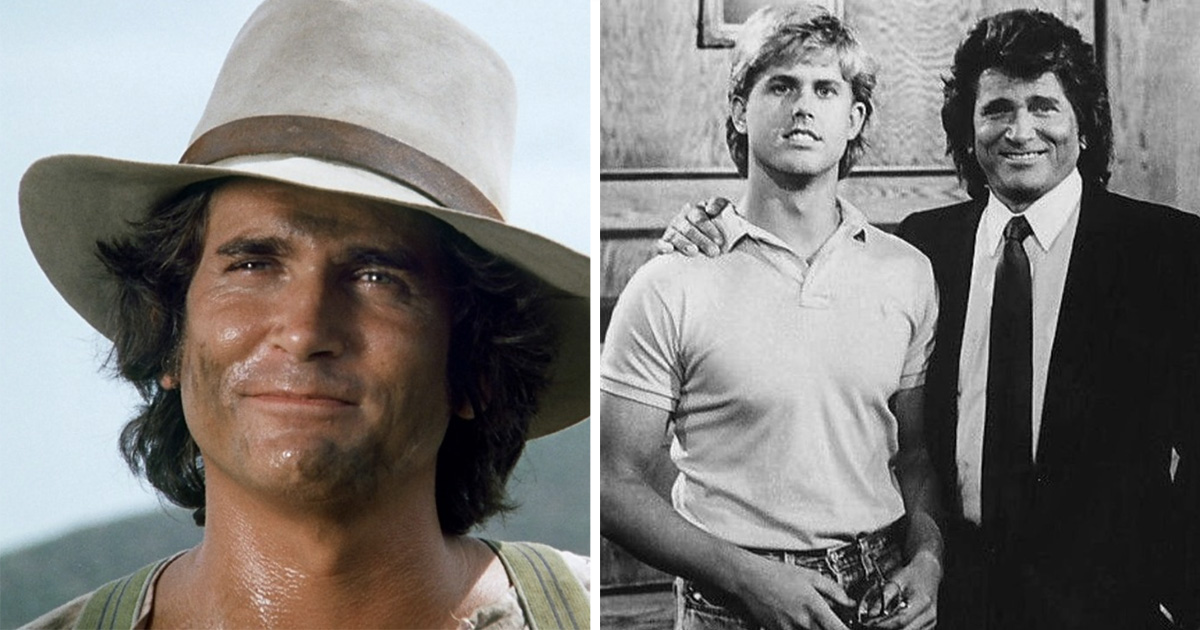 Michael Landon is a true Hollywood legend, having starred in Bonanza and Little House on the Prairie, amongst other cult hits. Though he rose to fame quickly, his legacy will always be remembered. Now, his son Michael Landon Jr is making it in Hollywood, just like his father did.

Most don’t know it, but Michael Landon Jr actually starred in Little House as well, but in a very small role. He simply looks the spitting image of his iconic father, though growing up with a Hollywood celebrity parent wasn’t always easy.

Michael Landon was working as a gas station attendant in Los Angeles when his life changed forever. Talent agent Bob Raison picked him up, and soon, the boy born Eugene Orowitz was turned into Michael Landon. It was a name that people thought would better be suited for show business.

Today, well, every person watching classic shows on television knows who he is.

Landon starred in several television series in the mid 1950’s before getting his big breakthrough role. He was eventually cast as Little Jose Cartwright on the iconic western television show Bonanza, spending a total of 14 years in the spotlight before the show was cancelled in 1973.

While working at a gas station near the Warner Bros Studios in Los Angeles, he caught the attention of talent agent Bob Raison. He suggested that the up-and-coming actor change his name to something that would fit the entertainment business better. It resulted in Eugene Orowitz changing his name to Michael Landon.

In 1956, he landed his first official role in an episode on the TV series Telephone Time. He also starred as Tom Dooley in the western The Legend of Tom Dooley, which ultimately led to the role of a lifetime, starring as Little Jose Cartwright on the iconic western show Bonanza.

But Michael Landon didn’t have to wait long for another huge gig. Next up was Little House on the Prairie, in which he starred as Charles Ingalls. The show was a massive success, with both Landon and the show itself being praised by both critics and the television audience. Many of his costars had their breakthrough roles on she show.

It became the second-longest role Landon had, and in 1979, he won a Golden Globe for Best actor in a television drama series. Little House also won several awards, including four Emmys and 16 additional nominations.

Michael Landon reach what you could call legendary status following his role in the drama series Highway to Heaven. He was honored with a star on the Hollywood Walk of Fame in 1984.

Over the course of his life, Landon got married three times, fathering a total of nine children. In 1991, he was diagnosed with pancreatic cancer and passed away a few months later at the age of 54.

Just a month following the diagnosis, the tumor on his pancreas had doubled in size and spread to his liver. He passed away July 1, 1991 with his wife Cindy Landon by his side.

“I think it was watching him go through the whole process that prepared her,” Leslie Landon, daughter of his ex-wife Lynn Noe, told People.

On July 1, Cindy posted an emotional tribute to her late husband, 19 years to the day he passed.

“July 1 we said goodbye to you. You left us way to soon. You will always and forever be in our hearts. Memories last a lifetime,” she wrote, together with a picture of the entire family.

Now, he’s making it in Hollywood, but not on the same side of the camera as his father did. No, he’s a successful executive producer and director; just like with any other child, his childhood shaped his later life.

By all accounts, Landon Jr’s childhood was filled with celebrities and money. At the same time, Landon Jr and his father didn’t always get along.

Michael Landon Jr was born June 20, 1964 in Encino, California. When Jr was welcomed to the world, his father was in the middle of his successful run on Bonanza, and life was pretty good.

Landon Jr grew up at the family’s mansion in Los Angeles. Simply having the name Landon was a pretty big deal at the time.

Growing up with his father

But for the most part, he didn’t think much of it.

“Obviously, you walk for a while in the shadow of your father,” Michael Landon Jr says.

“This doesn’t just go for juniors, it’s anyone whose father is successful. You have to get past the sense of entitlement and all the different things that come with it so you end up working really hard, honing on your own craft, creating your own content and your own vision. Listen I grew up in Beverly Hills on seven acres in a mansion with all sorts of help. It was unbelievable.”

As a kid, Michael Landon Jr followed in his father’s footsteps. In 1977, he appeared as “Jim” in one episode of Little House, and later on, he’d star in several Bonanza sequels as Benjamin “Benji” Cartwright.

Michael Landon Jr sure had a special upbringing. Not only did he grow up in a mansion with a super celebrity dad. He also spent plenty of time on set with him.

“Quite a bit,” Michael Jr said.

“When we had school breaks and they were filming, my sister and I would always go to the set and we were very close with Melissa Gilbert and Melissa Sue Anderson and all the kids. It was a 100-acre backyard in Simi Valley where we would play tag, hide and seek, and hunt for snakes.

“My father was a prankster,” he continued. “And he was fearless in terms of putting things in his mouth. So there might be a guest who would show up to the set and [my father] would put a small frog or something in his mouth, a lizard, and then he would go shake their hand and open his mouth and freak them out.”

Michael Landon was someone that everyone recognized. But, according to his son, he wasn’t one who liked to show off.

Landon preferred to spend time with his family, and didn’t really have any friends from show business that he hung out with. Instead, he loved spending time at home. Sure, he signed autographs when they were out on the street. But, otherwise, Landon Jr says he had a pretty normal childhood.

Also, his dad loved to pull jokes on him, having a really “salty” sense of humor.

“He loved to scare us,” he recalled.

“He just loved scaring us, he would go outside and rattle screens and jump out of places, he would walk up to you and open his mouth, and anything from a frog to a crab would come hopping or falling out. Constantly! When there was a scene with a bear he’d put a bear costume on and just scare the crud out of my little sister. He just would not stop. And he was a great, great story teller. Not only on television, but he would have a group of people around him instantly. He’d hold their attention and tell a great story.”

Even though Landon Jr had a great childhood, it had its ups and downs. Sometimes, he didn’t talk to his father at all.

“Oh yeah there was all sorts of bitterness and resentment and anger and being erratic,” said Landon Jr. “Racing my car and flipping it. Stupid, crazy behavior.”

Kicked out of mother’s home

At 16, Michael Landon Jr went through something that would take its toll on every child. His parents decided to get a divorce, which turned his world upside down. Landon Jr started to drink and did drugs, throwing his life away.

Though his mother Lynn Noe was “a wreck”, she tried to help his son get back on the right track in life. He decided to go to church, where a pastor helped him.

“I had some tough knocks, thank God,” he explained. “My mom kicked me out of the home, cut me off financially. I was not happy at the time, having come from an extremely extravagant lifestyle but thank God they did that to me.”

Michael Landon Jr knew he also wanted to be in the film business that was Hollywood, though not specifically as an actor, like his father. He studied to University of Southern California (USC) and later at the American Film Institute.

Throughout the years, he worked in every single position you can imagine, including as an assistant cameraman, apprentice film editor, production assistant and even some smaller acting work.

Yet from the off it was clear that he would rather be behind the camera than in front of it. Before long, he started to write screenplays for big studios like Fox, NBC, CBS, Disney and Hallmark.

Today, he’s been in the film business for more than 20 years, and along the way, he’s produced and directed several movies and won numerous awards.

“I was an assistant camera man. I remember him looking over at me for the first time after a certain performance he gave,” says Landon Jr.

“He looked over, and he wanted my affirmation, whether I thought he’d nailed the scene or not. Having worked with him for 5 years on “Highway to Heaven” and some other work, just having that first moment where he entrusted me with the creative process was very powerful.”

In 2003, Michael Landon Jr won three awards for his movie Love Comes Softly, which he directed. He also won the Character and Morality in Entertainment Awards for his film Love’s Enduring Promise (2004) and Love’s Long Journey (2005).

Since 2013, Landon Jr has been the producer of the Hallmark drama series When Calls the Heart, and in 2019, he produced the Canadian television show When Hope Calls.

Together with his partner Brian Bird, he founded the production company Believe Pictures, going on to release three feature films. Since, he’s also released four novels, with the latest, Finding Mercy: A Novel coming out in 2014.

That same year, the cast of Little House on the Prairie gathered for a tearful reunion on the Today Show. Michael Landon Jr was there to honor his father.

“The great thing about the series was the hours that my father set,” he said. “It doesn’t happen anymore, but he was always home for dinner.”

Michael Landon Jr sure has had a special life, growing up as the child of the biggest star in Hollywood and later pursuing his own career in show business.

Looking at pictures, it’s easy to see the resemblance between him and his father. And we are so happy that he’s continuing to work in films, helping to keep his father’s legacy alive.

We wish Michael Landon Jr all the best in the future. And to be honest, we hope to see him in more episodes if there’s ever a new spinoff of Bonanza or Little House.