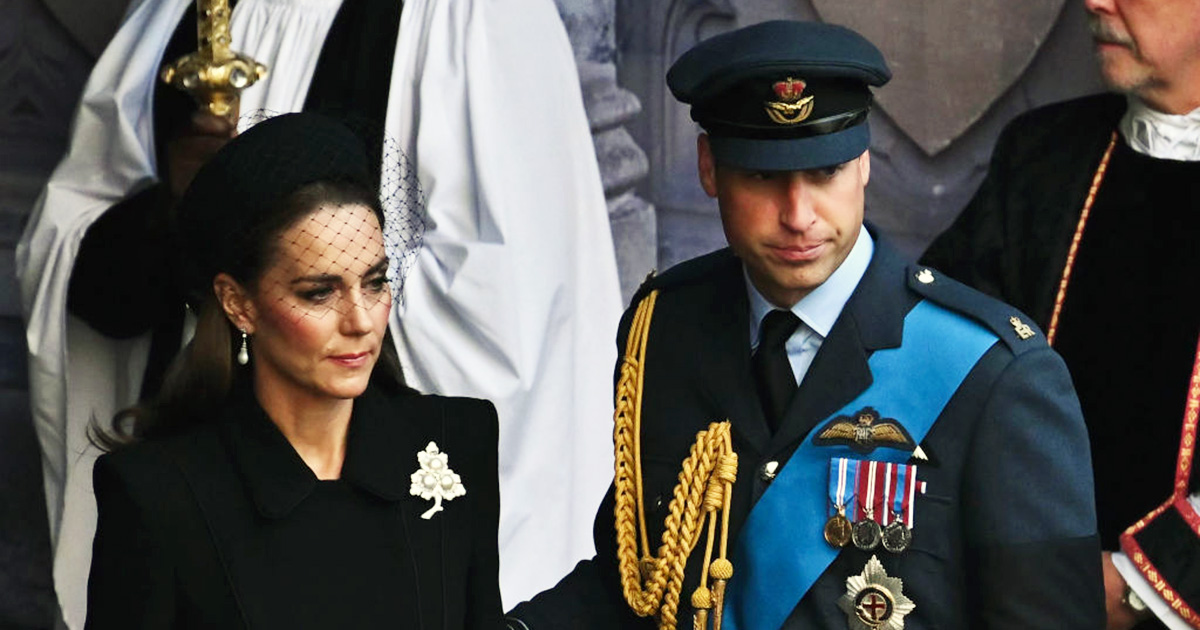 People around the world are mourning the late Queen Elizabeth II, who died last week at the age of 96, ending a record 70 years on the British throne.

As the UK continues an official mourning period for the Queen, culminating in her funeral on Monday, members of the royal family have been grieving for their beloved matriarch, and paying their respects in their own ways.

Wednesday, Kate Middleton — now the Princess of Wales — had a sweet, subtle way of paying tribute to Queen Elizabeth II as she joined the family to receive Her Majesty’s coffin at Buckingham Palace.

Kate, 40, is the wife of Prince William, who is now the heir apparent since his father King Charles III ascended to the throne. Kate and William received new titles, as the Prince and Princess of Wales.

The Princess now has an even more important role in the royal family. She is the future queen consort, and the mother to the second-in-line to the British throne, Prince George.

And Wednesday, she was spotted wearing a fashion accessory that many interpreted as an homage to her late mother-in-law.

The Queen’s coffin was flown from Edinburgh, Scotland to London, and senior members of the royal family traveled to Buckingham Palace to receive the coffin.

This included the King and Queen Consort, Prince Harry and his wife Meghan Markle, and Prince William and Kate Middleton.

Many remarked on the Duchess’ outfit: dressed in all black, she also wore strings of pearl, as well as pearl earrings and a pearl brooch.

Pearls have often been associated with the royal family and the aristocracy, and are often worn during periods of mourning. But the late Queen was especially fond of pearls, so the Duchess’ accessory choice was likely a subtle nod to the Queen, according to Daily Mail.

And according to Vogue, the Diamond and Pearl Leaf Brooch she wore during the procession was actually owned by the late monarch, and was previously lent to Kate Middleton in 2017.

Diana received the earrings as a wedding gift from Collingwood Jewelers. She wore them several times throughout her marriage, but perhaps most famously at a Vanity Fair party in 1994.

Following her tragic death, Princess Diana left her most treasured pieces to her sons’ future wives.

“I would like you to allocate all my jewellery to the share to be held by my sons, so that their wives may, in due course, have it or use it. I leave the exact division of the jewellery to your discretion.”

It is likely she chose them as another subtle homage: Diana, who was killed in a car crash 25 years ago, was William’s mother, and Kate has now inherited her title as Princess of Wales.

Kate Middleton has reportedly had a special connection to the late Queen. It’s no secret that the royal family has faced some personal upheaval in recent years — particularly allegations made by Prince Harry and Meghan Markle, along with their departure to California.

With Meghan and Harry stepping down from royal duties, and the death of Prince Philip in 2021, William and Kate became even more important, and were seen by the Queen as the stable future for the monarchy.

“It’s speculation and conjecture, but you would think the Queen very much regarded Kate as a safe pair of hands, she’s been a member of the Royal Family for 10 years now,” Joe Little, Managing Editor of Majesty Magazine said according to Daily Express.

“I think given all that’s gone on in the Royal Family over the past few years; the supposed fall outs, the Duke of York and the death of the Duke of Edingburgh, the Queen had great trust in Kate.”

It has been reported that Kate could inherit $110 million in jewelry from the late monarch. It’s also alleged that her more estranged daughter-in-law Meghan will receive nothing from the Queen.

After the Queen’s death, it’s likely that William and Kate are the most well-liked members of the royal family, and will be crucial in maintaining their public image in the years and decades to come.

In the days since Queen Elizabeth’s death, Kate has also been a personal source of comfort for her family. She reportedly was the one who broke the news to her children of their grandmother’s death.

Our thoughts are with the royal family as they continue to mourn the late Queen Elizabeth II.

It’s sweet to see that Kate Middleton found a subtle way to pay tribute to her late mother-and-law through her fashion choices.