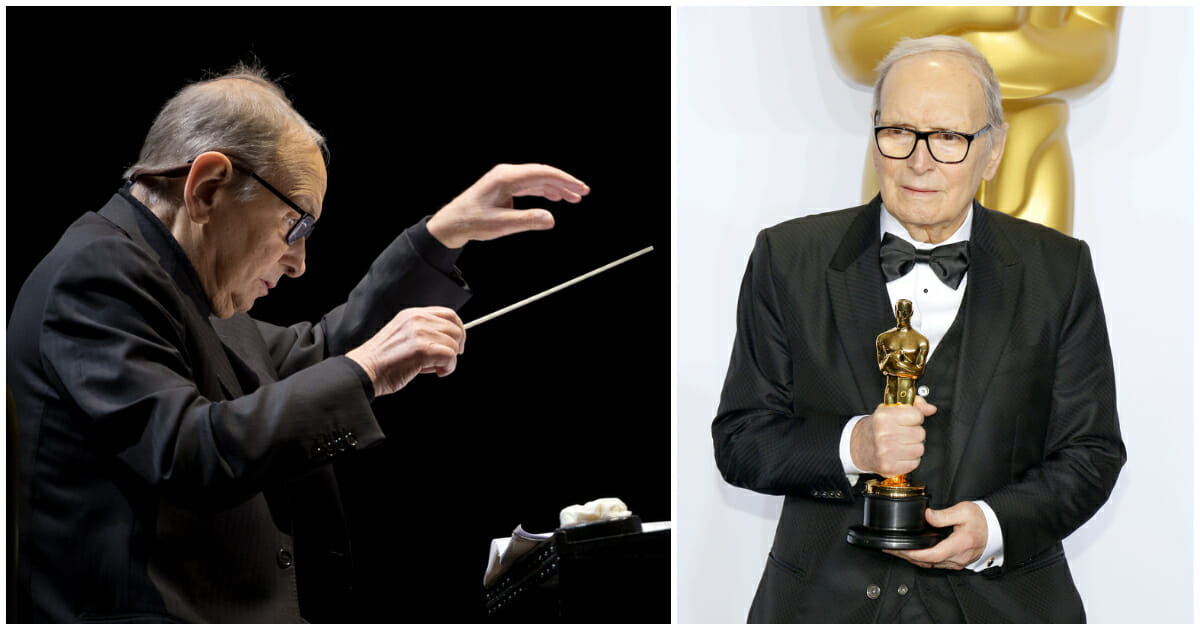 The film industry lost another one of its true legends this morning: Ennio Morricone, the Italian composer who scored some of the most famous movie themes of all time, has died at the age of 91.

One of the most prolific and iconic composers of cinema, Morricone composed music for over 500 films in a career spanning over 70 years.

Even if you don’t know him by name, you’ve certainly heard his music.

His most famous work is the score to the classic western film The Good, the Bad and the Ugly, which is one of the best-selling movie scores of all time and has become associated with the entire western genre.

Morricone was born in Rome in 1928. The son of a trumpet player, he pursued music from a young age, learning the trumpet and quickly composing his own works.

He found success writing music for radio and television dramas, and in the 1950s pursued a career in film composition. Working in several genres he found his biggest success creating the sound for “spaghetti westerns.”

He composed the music for Sergio Leone’s “Dollars Trilogy,” starring Clint Eastwood, the third film of which was the iconic The Good, the Bad and the Ugly. Morricone’s score became a best-selling record.

He then teamed up with Leone again for another western: the classic Once Upon a Time in the West, another highly acclaimed film score.

The Italian director-composer duo of Leone and Morricone is one of the best-known in film history. They teamed up once more for 1984’s Once Upon a Time in America, starring Robert DeNiro.

“The music is indispensable, because my films could practically be silent movies, the dialogue counts for relatively little, and so the music underlines actions and feelings more than the dialogue,” Leone once said, according to the Hollywood Reporter.

“I’ve had him write the music before shooting, really as a part of the screenplay itself.”

While Morricone never left his home country and never learned to speak English, he had success in Hollywood working with some of the United States’ biggest filmmakers.

He composed the scores to classic films like The Untouchables, The Thing, In the Line of Fire and The Mission, which was voted by AFI as one of the greatest Hollywood film scores.

In his home country, he continued to write music for Italian films, including the Oscar-winning classic Cinema Paradiso.

But a younger generation might know his music from the works of Quentin Tarantino, a big fan who frequently used Morricone’s old scores in his own films.

Eventually, the two worked together on the 2015 film The Hateful Eight, which won Morricone the Academy Award for Best Original Score… shockingly, the only competitive Oscar he ever won in his long career (though he won an honorary award in 2017.) He was at the time the oldest person to ever win a competitive Oscar.

After his death, many in the film industry paid tribute to the late master, including many of his fellow film composers.

Hans Zimmer, composer for The Lion King and Inception, cited him as a major influence.

“The first movie I ever saw was Once Upon A Time In The West. I heard the music and saw those images and I said, ‘That’s what I want to do,'” he told BBC Breakfast.

“Ennio was an icon and icons just don’t go away, icons are forever.”

Rest in peace, Ennio Morricone! Truly one of the greats — thank you for bringing so many great films to life with your music.

Share this story with your favorite memories of his music!