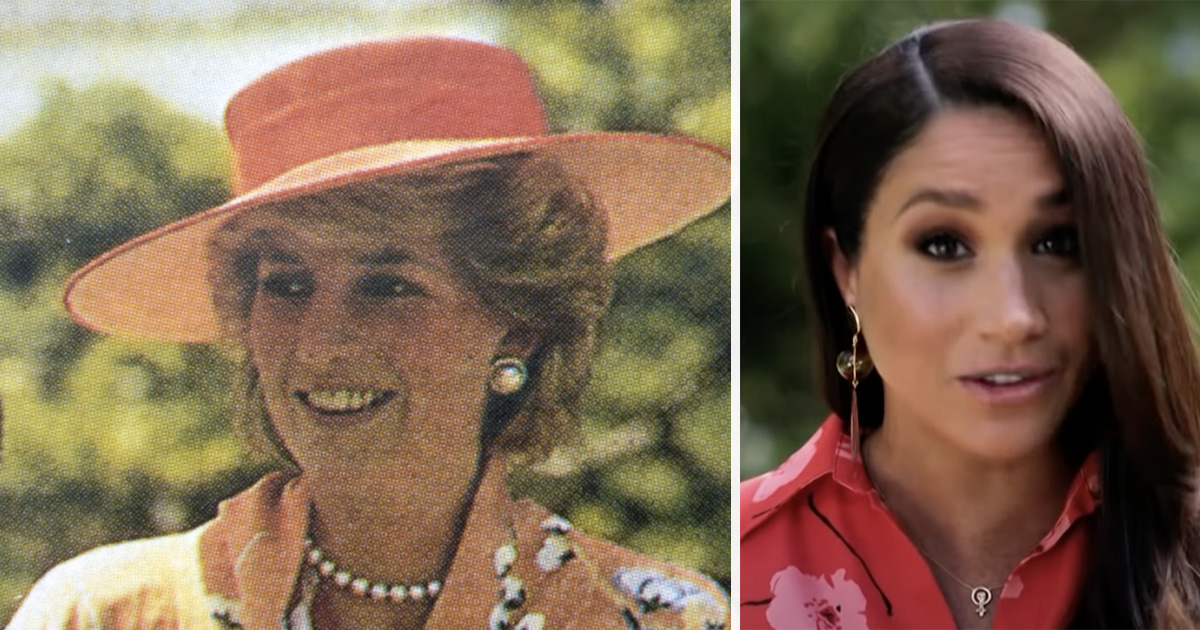 It’s been a hectic few days for Meghan Markle and Prince Harry. Their baby boy Archie celebrated his 2nd birthday last week, and soon after the couple decided to participate in a TV fundraiser.

It was the first public appearance for Meghan since the revealing Oprah Winfrey interview, and the soon-to-be mother of two took the opportunity to pay tribute to a much-loved and much-missed person in Princess Diana.

Meghan Markle didn’t do it in words, though – but through something she was wearing.

Meghan has been very much trying to stay out of the spotlight since her and Harry’s shocking interview with Oprah Winfrey in February.

The former actress is now focusing on the birth of the couple’s second child, due to arrive this summer.

During the Oprah interview, Meghan and Harry announced that they are expecting a little girl. They also confirmed it will be their last child.

“To have any one or any two, but to have a boy and then a girl—what more could you ask for?” Harry told Oprah. “But now we’ve got our family. We’ve got the four of us, we’ve got our two dogs. Done.”

“Two is it,” Meghan answered.

Neither Harry nor Meghan have spoken any more of the Oprah interview, which sent the Royal Family into a crisis. One person that has spoken of it is Oprah herself.

To her, the most surprising thing was how honest and open Meghan was about her experiences within the Royal Family.

Meghan Markle didn’t travel with her husband for the funeral of Prince Philip last month9. She was reportedly advised by doctors to not fly due to her pregnancy.

Harry came back following a couple of very hectic days, not the least because of all that happened between him, his father Charles and brother William. The relation between the three seems to be at rock bottom – even though William and Kate actually are trying to do something about it.

Reports stated that Harry was “emotionally torn” upon returning to the US. However, he and Meghan have many things to focus on going forward. Not only are they preparing for their second child, but both are focusing on their civil careers. Soon, Markle will release her first children’s book, too, and Harry has many things going with his new job.

Last week, the couple celebrated Archie’s second birthday, but it appears Harry and Meghan were also in the mood to help others as well.

They showed their support for a social organization in New Zealand named Make Give Live in honour of their son’s second birthday, by donating 200 knitted beanies.

The charity will now donate a total of 400 beanies to children in need this upcoming winter.

“Thank you Harry & Meghan, Duke & Duchess of Sussex, and of course, Archie for the generous donation of these 200 beanies to your friends on the other side of the world in NZ.

“I Got Your Back Pack” [a charity] was very grateful for them and they will be sent in care packs to refuges around NZ to warm heads and hearts,” Make Give Live wrote in an Instagram post.

“It also meant a lot for our maker community to have something special to bring them together to enjoy connection and creativity whilst making them, and didn’t they do an incredible job!? Happy Birthday Archie.”

For Mother’s Day, Harry and Meghan also decided to do something very special in order to help others. Through their non-profit foundation Archewell, the couple made a donation to help disadvantaged mothers in their new home state of California.

It was revealed through the Harvest Home Organization that Meghan and Harry are donating many things for mothers and babies in need.

“Happy Mother’s Day today and every day to all moms out there. Thank you for your constant love, your tireless energy, and for showing up and being just ‘enough’. We see you and we love you,” Harvest Home wrote on their Instagram page.

“Today, we are thrilled to have the support of Archewell Foundation, The Duke and Duchess of Sussex, and Procter & Gamble, who are donating diapers, cleaning supplies, and other essential items to ensure that the moms and babies at Harvest Home are celebrated all throughout the year.”

Meghan’s stopped short of making public appearances since the aforementioned Oprah interview. However, that changed last week, when she and Harry were part of a television fundraiser VAX Live: The Concert to Reunite the World.

Megan made a television speech from a bench at her home in Montecito, California. She spoke of her joy at she and Harry soon welcoming a daughter, and the fact women need more support going forward.

“My husband and I are thrilled to soon be welcoming a daughter,” Meghan, said. “It’s a feeling of joy we share with millions of other families around the world. When we think of her, we think of all the young women and girls around the globe who must be given the ability and the support to lead us forward.

“Their future leadership depends on the decisions we make and the actions we take now to set them up, and set all of us up, for a successful, equitable, compassionate tomorrow,” she continued.

Meghan looked fabulous, and it certainly appears that she and Harry are doing great. According to The Sun, she was wearing a $1,700 Carolina Herrera red poppy dress alongside several pieces of jewelry.

Bu one of Meghan’s items held special significance as it was a tribute to a very important woman. She wore a $25,000 Cartier watch – which was previously owned by Harry’s mother, Princess Diana.

“Plan to give it to my daughter”

Meghan – just like Diana before her – is greatly fond of Cartier watches. In the 90’s, Diana frequently wore hers — which was a gift from her father – at royal engagements. Meghan has reportedly now inherited Diana’s watch, and she sure wears it with style and dignity.

As per reports, Meghan bought herself a Cartier watch while starring on the television series Suits.

“I’ve always coveted the Cartier French Tank watch,” she told Hello Magazine. “I had it engraved on the back, To M.M. From M.M, and I plan to give it to my daughter one day. That’s what makes pieces special, the connection you have to them.”

The aforesaid interview wasn’t the first time that Meghan has worn a wonderful piece from Diana.

For the Oprah Winfrey interview, Meghan wore a bracelet that belonged to Harry’s mother, Princess Diana, as reported by People. According to the Express, the bracelet has an estimated value of more than $174,000.

Reached out to Diana’s friend

Suffice to say, the bracelet is special, and Meghan already has a relationship to Princess Diana’s jewelry. The same bracelet she was seen wearing during the Oprah interview was used to help craft Meghan’s engagement ring.

“The little diamonds either side are from my mother’s jewelry collection to make sure she’s with us on this crazy journey together,” Harry told BBC in 2017.

“Obviously not being able to meet his mum, it’s so important to me to know that she’s a part of this with us,” Meghan added.

Meghan Markle and Princess Diana share their fair share of similarities, especially since the two were both married into the Royal Family. During the Oprah Winfrey interview, Meghan revealed that she reached out to one of Diana’s friends during the time she had mental health struggles

“One of the people I reached out to was one of my husband’s mom’s best friends, one of Diana’s best friends,” Meghan said. “Because it’s, like, who else could understand what it’s actually like on the inside?”

For Harry and his brother William, the summer could prove to be a period of heightened emotions when they unveil a new statue of their late mother Princess Diana.

Harry had originally planned to be in the UK for the unveiling of the statue, set to take place on July 1 in the Sunken Garden at Kensington Palace. That date would have marked Princess Diana’s 60th birthday.

Harry to reunite with William?

There’s still plenty of time before July 1, and a good many things will probably happen regarding the relationship between Harry and his family.

This will also be the crucial time in which Harry will decide to be a part of the unveiling of his mother’s statue or not, according to Myers.

“I think a lot will determine what happens in the interim period. Some quarters of the family did give him a frosty reception and perhaps that did shock him somewhat.”

“I don’t think we will realize the fallout of that Oprah Winfrey interview for some time,” he added. “Maybe once we get back to a bit of normality, the rest of the family will start thinking about that a bit more carefully. It might not be good news for Harry.”

Meghan Markle’s tribute to the late Princess was truly wonderful! Please, share this article in honor of Diana