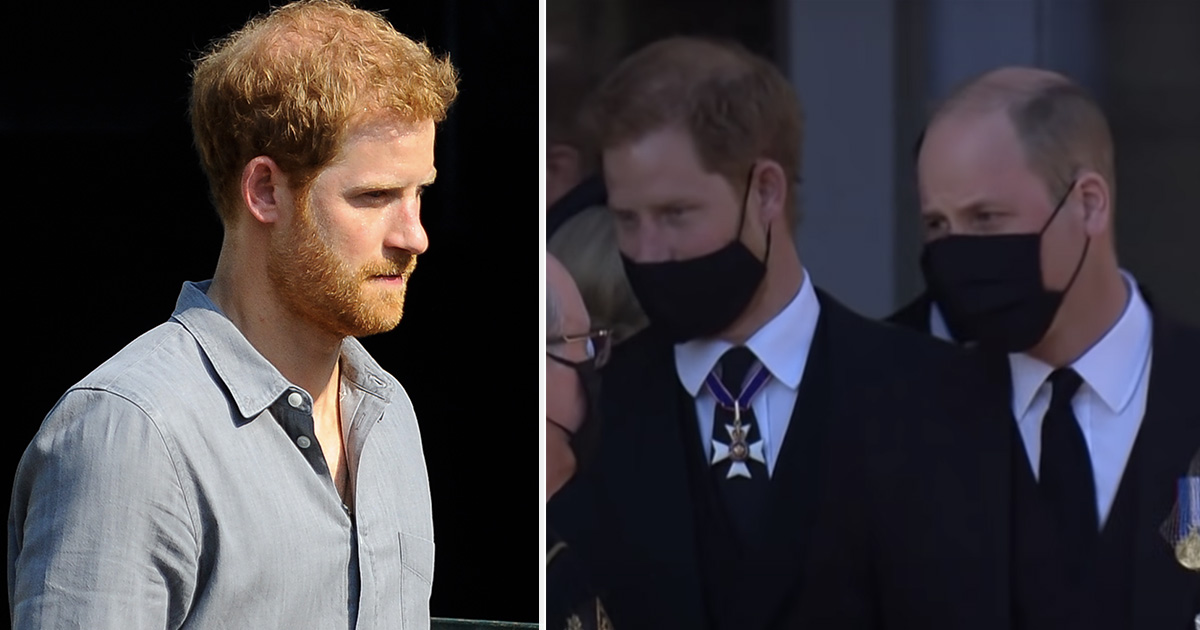 Prince Philip’s funeral was both wonderful and beautiful, and paid tribute to one of the great icons of the British Royal Family. Many of his family members were in attendance on Saturday, but it was perhaps Harry and William who became the biggest talking point.

The two have had a troubled relationship since the infamous Oprah Winfrey interview – despite several attempts to settle the dust.

It quickly became clear that Harry and William weren’t going to walk shoulder-to-shoulder into the church on Saturday. Now, though, new report suggest that William actually ordered that it be so.

Prince Philip’s funeral on Saturday was an intimate service at the St. George’s Chapel, located within the grounds of Windsor Castle. A total of 30 people, including all senior members of the Royal Family, were in attendance.

All of the Queen’s four children and their spouses – the Prince of Wales and the Duchess of Cornwall, the Princess Royal and Vice Admiral Sir Timothy Laurence, the Duke of York, and the Earl and Countess of Wessex – attended the funeral, accompanied by their 10 grandchildren, as well as the Duchess of Cambridge, Kate Middleton – a future Queen.

Among the Duke’s friends, meanwhile, were Bernhard, Hereditary Prince of Baden, Penny Brabourne, Countess Mountbatten of Burma, and Prince Donatus, Landgrave of Hesse, according to CNN.

His grandchildren, Harry and William, were of course also in attendance. And it was they who became something of a pivotal talking point before and even after the funeral.

Philip passed away on April 9 at Windsor Castle, having become the nation’s longest-serving spouse of a reigning monarch, also known as a “consort”. He and Queen Elizabeth were married for 73 years.

At the funeral service, it was clear that the Queen was deep in grief.

Queen Elizabeth sat alone as she bid a final farewell to her husband, who had himself been involved in the plans for his own funeral.

So, why did she sat alone? Well, reports say that was all about the COVID-19 pandemic and its regulations within the UK – all guests who aren’t members of the same household are required to sit 2 meters apart. Since the Queen and the late Prince Philip had been in their own bubble in quarantine, she wasn’t allowed to join members of her family who’d been in another bubble.

Prince Philip also had two final wishes, which the Queen made sure to fulfill.

The funeral service was led by the Dean of Windsor, who made sure to pay tribute to Prince Philip’s “kindness, humor and humanity”, as well as the “many ways in which his long life has been a blessing to us”.

“We have been inspired by his unwavering loyalty to our Queen, by his service to the nation and the Commonwealth, by his courage, fortitude and faith,” the Dean added.

And yet arguably the hottest topic surrounding the British Royal Family has not, strangely, been Prince Philip before and after his funeral.

Rather, it was Prince Harry, who’s now back in the UK for the first time since his dramatic Oprah interview. Not only that, but it was the first time that he would meet his brother William in quite a long while.

Suffice to say that their relationship currently isn’t at its best.

Even though Harry’s relationship with William hasn’t been good, now is not the time for fighting. All members of the Royal Family were on board with the fact that it was the time to show Philip respect and honor and time to mourn him in the way that he deserved.

“There has been so much bad blood but everyone is hoping that, perhaps, this will mark the beginning of a reconciliation,” a source told the Daily Mail

Even though the funeral itself was a very sad occasion, the timing of Harry meeting his family again couldn’t have been better, according to royal expert and author Penny Junior.

“My hope is that if something good can come out of the Duke’s death it will be that it brings the family together. But clearly there is a lot of hurt there on all sides, and I imagine they will all be feeling apprehensive about seeing one another again,” she said days before the funeral.

Was separated at funeral

Most onlookers will have noticed that Harry and William weren’t walking shoulder-to-shoulder behind Philip’s coffin at the funeral on Saturday.

According to several news outlets, Queen Elizabeth ordered Prince Harry and Prince William to be separated in the funeral procession behind Philip’s coffin. Instead, they were separated by their cousin Peter Phillips, who stood in the middle.

All will remember Harry and William famously walking shoulder-to-shoulder at the funeral of their beloved mother Diana. At that time, they were 15 and 13 years of age respectively.

The siblings maintained stony expressions at the weekend as they walked behind their grandfather’s coffin, separated by Peter Phillips.

So why was Peter Phillips the one walking in the middle of them? Well, Philips was apparently crucial to both Harry and William when their mother passed away.

William requested not to stand next to Harry

And, according to royal biographer Hugo Vickers, he was chosen intentionally, to help his two younger cousins find a way to make their relationship work.

“Peter Philips was incredibly good with the boys when Diana died, so I think it will be very good for them,” he said.

The Queen was said to have planned everything about the funeral, and initial reports told how she ordered her two grandchildren not to walk at each other’s side. However, new information from the British press now says that it wasn’t the Queen’s decision at all.

Instead, it was William who requested that Peter be placed between him and Harry.

Earlier in March, the Queen reached out to Harry to try and help in the rebuilding their relationship. Just days before the funeral, Harry reached out to family members himself.

“The wounds are still pretty raw”

According to Mirror, Harry called his father, his brother and cousins Princess Beatrice and Princess Eugenie after arriving from California. A source told the news outlet that they’re actively trying to put aside all tension and issue.

“This is about giving the Duke the send off he deserves surrounded by his family.”

But now, let’s go back to the day of the funeral, as Harry and William entered St. George’s Chapel with Peter Phillips walking between them.

It wasn’t a big surprise that the atmosphere between the brothers was pretty frosty once inside as well.

Sitting together with wife Kate Middleton, directly opposite Harry, William didn’t appear to make eye contact with his younger sibling one single time. Instead, he focused his gaze at Prince Philip’s coffin, as reported by the Daily Mail.

Meanwhile, Harry was staying just minutes away from William’s house when he arrived in the UK before the funeral. Even so, they didn’t spend time together.

Sources told the Daily Mail that people close to the Royal Family had been ‘walking on eggshells’ the entire week. Now, though, there’s been a big sigh of relief since the brother’s have actually spoken.

The fact that the two brother’s spoke following the funeral shows that there is perhaps a glimpse of hope that their bond will prevail, hopefully giving Harry and William a fresh start.

“This could have been a moment of risk, instead it allowed us the first glimpse of the possibility that somehow William and Harry can put their bitter split behind them and rebuild that once whisper-close bond.

Kay added: “It is hard to read too much into this encounter, for it was all too brief, but if there is to be reconciliation between the brothers, this was surely the moment of its inception.”

But not all royal members seem to be interested in giving Harry a second chance.

According to a Daily Mail source, Princess Anne, Prince Edward and his wife Sophie didn’t acknowledge Harry before or during Saturday’s funeral.

“Ironically the only one who has expressed any sympathy towards him is Prince Andrew,” a source said. “He knows from Sarah Ferguson – and now first-hand – how it feels to be the outsider, which Harry very much is.”

The source added: “As far as the others are concerned, there is a deep sense of protection towards the Queen and resentment towards Harry. There is little sympathy for him after what he and Meghan said on Oprah.”

Meghan Markle stayed in the US for the funeral, preparing for the birth of her and Harry’s second child. Richard Kay claims that several “unresolved” issues remains to be fixed before everything can get back to normal. And only time will tell if it ever will be truly repaired.

“The fall-out from Harry and Meghan’s Oprah Winfrey interview is still raw and its issues, not least the claims that a member of the Royal Family had made racist comments about the color of their son Archie’s skin, remain unresolved,” Kay said.

What do you make of all this? Do you think William and Harry’s relationship can be saved or not? Give us your opinion in the comment section!