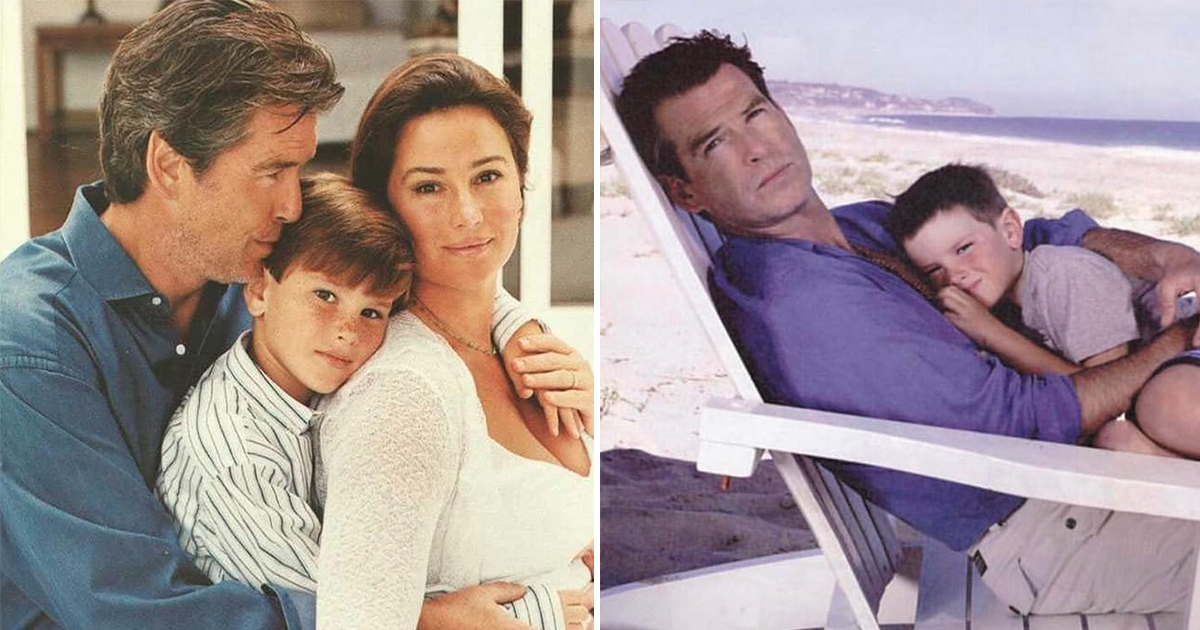 Pierce Brosnan’s probably most famous for his role as the biggest bachelor ever, James Bond. But outside of the spotlight, he’s a family man with a big heart, having both children and grandchildren.

Pierce probably isn’t used to being outshone in front of the cameras. But his oldest son from his second marriage, Dylan, might be stealing the show. This is the story of the 23-year-old Dylan Brosnan, who’s now conquering the fashion world.

When you think of a classy James Bond, it’s safe to say that the name Pierce Brosnan comes to mind. The 007 star is known for his many memorable acting performances, and not to be forgotten, his fantastic and lovable persona.

But outside of the screen, the Irish-American actor is a family father, having both children and grandchildren. Brosnan got married for the second time in 2001, tying the knot with journalist Keely Shaye Smith.

Pierce and Keely had their first son, named Dylan, in 1997.

Now, 23 years of age, Dylan has taken the world by storm. And it’s easy to say, he might be stealing the show from his father.

Dylan Brosnan was born on Jan.13, 1997 in Los Angeles. He has three siblings, Sean, Christopher and Paris.

Also, he had a half sister named Charlotte, who tragically died of ovarian cancer in London in 2013, aged 42.

“Charlotte fought her cancer with grace and humanity, courage and dignity. Our hearts are heavy with the loss of our beautiful dear girl. We pray for her and that the cure for this wretched disease will be close at hand soon.”, Pierce Brosnan said in a statement.

Growing up with a movie star dad was “incredibly normal”, according to Dylan. Speaking with Enquirer, he hails his dad as great guy. Already at a young age, they knew that their dad was a star.

“Yeah, of course. I don’t think it was something that we focused on growing up, but it was awesome and very exciting to grow up on film sets and travel with him. It was such a great opportunity,” Dylan said.

It didn’t take long before it was clear that Dylan would follow in his fathers footsteps in show business. As a teenager, he started to conquer the fashion world.

Since 2014, he’s been a model for fashion label Saint Laurent, and became one of the faces for their Spring/Summer collection. The following year, he made his runaway debut during the Men’s Fashion Week in Paris.

In 2017, Dylan appeared on the front of the GQ Style Magazine in Germany, wearing a suit and tie.

Speaking with Vouge, Dylan says that the designer spotted him in Malibu, with his freckles, original hair and angelic face charmed the biggest fashion houses in the world.

Since his debut, he’s worked with Dolce & Gabbana and H&M, among others. In 2020, Dylan walked the catwalk for the Spring/Summer Moschino show.

Worked with his father

But Dylan Brosnan doesn’t work exclusively with fashion. He also followed his fathers footsteps when it comes to cinema.

He’s know for the role of the composer in Out of Reach (2015) and served as the director of photography for The Young Motivators Club (2018).

Dylan has also worked together with his father Pierce Brosnan. For the 2017 documentary Poisoning Paradise, which was produced by Pierce and his wife Keely Shaye Smith, he served as a production assistant.

Last year he stared in the short film Iconic.

So what is Dylan doing now? Well, 2020 has been a huge year for him and the Brosnan family, which made his father Pierce so proud.

In January, it was announced that Dylan and his brother Paris, 19, were chosen as the joint Golden Globe Ambassadors for the Golden Globe Awards,, which honors the best in television and film Beverly Hilton Hotel in Beverly Hills.

“Dylan and Paris Brosnan have already achieved tremendous success in the fashion world and are following in their father’s footsteps in entertainment,” Lorenzo Soria, President of the Hollywood Foreign Press Association, said.

Dylan and Paris made history by being the first two siblings to be chosen for the prestigious role, also called “Mr Golden Globes, or Mrs Golden Globes. It involves assisting in presenting awards and escorting stars from the stage, and it was a huge honor.

“We’re proud to honor our dad’s legacy as we join the incredible roster of previous Golden Globe Ambassadors, many of whom have gone on to pursue their own dreams in the entertainment industry,” Dylan said in a statement.

During the telecast, Dylan and Paris highlighted a worthy cause in FEED, which delivers nutritious meals to school-aged children around the world.

Before the show, the brothers walked the red carpet together with their parents. And boy, did they look great, wearing matching tailored tuxedos, sealing the show from their father Pierce.

They have been seen walking the red carpet together with their father on several occasions, having a great relationship.

In May earlier this year, Pierce Brosnan once again saw his son Dylan break new ground, graduating from the USC School of Cinematic Arts.

Like millions of other students around the country, in the midst of the covid-19 pandemic, Dylan didn’t get the graduation ceremony he and every other student deserves.

Still, he celebrated together with his family, wearing his black graduation cap and gown.

Pierce Brosnan took to Instagram to share some fantastic and lovable photos of the graduation, and he looks so happy and proud. And also, he wrote som beautiful words for his son.

“Congratulations Dylan on your graduation and academic achievements at USC School of Cinematic Arts. Go forth into this new world and make it your own. Be fearless, courageous and generous. Love, Dad”

As for the graduation, it is certain that Dylan will go on and have a successful future. He has the support of his mom and dad, and the rest of his family, and it’s easy to identify the love Dylan’s getting from his father.

Is Dylan Brosnan doing anything else? Of course he is. In fact, he’s the lead singer of the rock band “Raspberry Blond”.

In 2016, Dylan released the song “Belong”, which you can listen to here.

He’s performed several times in the last couple of years, and Dylan has also been doing some gigs of his own.

In October of last year, Dylan together with a fellow member of the band made an appearance as Raspberry Blond at the Clarins And The Malibu Foundation Host Replant Love at Paramount Ranch.

Cares about the environment

Dylan shares a mutual love for environmentalism with his parents. At the ranch, he together with 700 volunteers planted more than 3,000 native trees and shrubs.

Speaking to Hollywood Live, Dylan said that his parents successful marriage has influenced his view on relationships.

“I think they have a lot of respect for each other and like what they do. They understand each other’s work ethics. If one of them needs space or time to figure something out that’s there,” Dylan said.

Pierce Brosnan has shown plenty of interest in his son’s music. In an interview with The Guardian earlier this summer, he spoke about Dylan’s art.

“He’s a wonderful musician and a great academic,” Brosnan said. “He just graduated from USC film school.” The graduation, like so many others, was cancelled. “We got him a cap and gown and sat here watching it [the online ceremony] on the sofa”.

Pierce is fiercely proud to show the world his son’s great talents with the guitar, and has posted videos via Instagram of Dylan playing.

Music runs in the family, with father Pierce being a huge star in Mamma Mia! The Movie (2008). Back then, he played the role of Sam Carmichael, the main character Sophie’s possible father and engaged in not only acting, but also singing.

So is Dylan Brosnan dating anyone? Yes, he is.

He’s been dating painter Avery Wheless for a couple of years. She’s also a well known film director and writer, and had many of her works published in huge publications, including Rolling Stone Magazine.

Pierce Brosnan and wife Keely Shaye Smith has spent a lot of time at their oceanside home on Hawaii during the covid-19 pandemic, with Avery being on pictures together with the family several times.

It’s sure to say she’s well appreciated by the Brosnan family, and they look like a great couple!

Dylan Brosnan’s still only 23 years old, but has already made a name for himself in many different parts of show business. He is still living in Los Angeles.

Both Dylan and his brother Paris are getting plenty of social media fame, being followed by thousand and thousand of people on different accounts.

On one hand, it can mean plenty of opportunities in the future. But Pierce Brosnan is a little bit worried.

“Yes, it does concern my wife, Keely, and I,” he told The Guardian. “The footprint that they’re leaving will stay with them for many years to come. It’s treacherous waters. I went on Instagram to follow Paris, to make sure that he was acquitting himself well and not entering into any kind of liaisons with folk of ill repute. It’s a strange animal and you have to be careful with it. It can be narcissistic and you have to balance it out with human lightness.”

We don’t know what the future will hold for Dylan. But one thing is for certain, his father Pierce Brosnan must be so proud of his lovely son.

Do you think Pierce Brosnan’s sons will be more famous than their dad one day? Please, let us know your thoughts in the comment section.

Also, make sure to share this article with your friends!