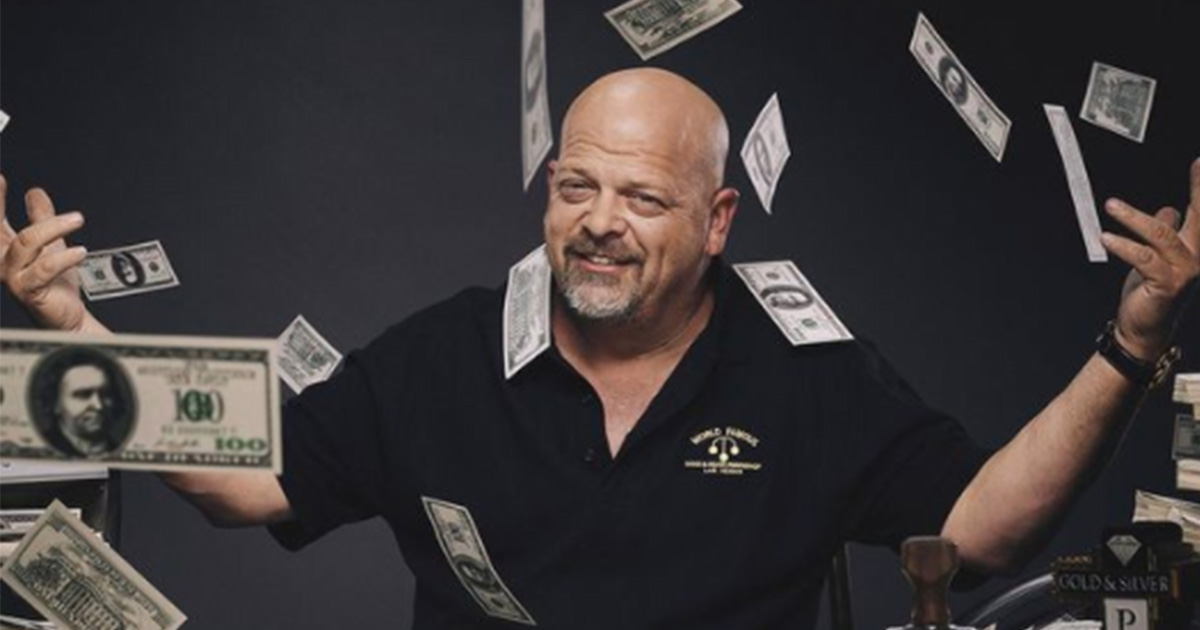 Pawn Stars has become somewhat of a classic television show. It took Rick Harrison’s Gold & Silver Pawn Shop in Las Vegas, Nevada, from a small, anonymous place into a world sensation when the show started airing. Today, you can watch the show in over 100 countries.

Business has been really good – based on a normal COVID-free year – and Rick Harrison has made a personal fortune.

Pawning has always been a big form of consumer credit in the United States, at least up until the 1950s. Still to this day, there are pawnshops most everywhere that help people manage to get through the day. Not only that, but the shops themselves can sometimes be like taking a walk through history!

No matter if you want to pawn a gold watch, old autographs, coins or a sword, there’s usually always some expert around that can help you.

Talking of experts, perhaps the colorful world of pawning is best demonstrated by taking a look inside the Gold & Silver Pawn Shop in Las Vegas, Nevada. The Harrison-family have run the shop for a long time, and even turned themselves into celebrities via the reality program Pawn Stars.

Now, Rick Harrison is running the shop, following his father Richard Benjamin “The Old Man” Harrison’s passing in 2018. Rick was with his father when he started the shop, and received no real education since he was a high-school drop out.

Now, we’re going to say that it’s always a good idea to get yourself a proper education. For Rick, though, things worked out great anyway. And his future definitely looks both promising and profitable.

Before we get to Rick, though, how did his father, Richard Benjamin “The Old Man” Harrison end up in Las Vegas?

Growing up, Richard’s Harrison’s family didn’t have a lot of money. According to son Rick, they really struggled.

“They were dirt-poor white trash, left to survive on their wits for the most part,” Rick wrote in his 2011 autobiography, License to Pawn: Deals, Steals, and My Life at the Gold & Silver.

Following 20 years in the Navy, Richard and his wife Joanne moved to San Diego, where they had four kids.

Rick grew up alongside his brothers, with his parents working in the construction business. However, things were tough. One day, they decided to relocate to Las Vegas, the place of second chances.

“When I was 16, you know, he ended up going broke in ’81, and all of a sudden, we’re going to move to the land of milk and honey,” Rick Harrison recalled in an interview with Fox.

“We’re going to move to Vegas, okay, because he had a little business where he bought and sold gold on the side, and so, he came to Vegan to open a little coin shop. And I worked with him then, and then just kept on working with him my whole life.”

Rick opened up the Gold & Silver Coin Shop together with his father. The coin shop did well, and eventually, they decided to relocate again. In 1987, “Old Man” got his license to buy and sell second-hand goods, only for their lease to expire a year later.

Dropped out of school

The site they would find for their next shop is where history was made. “Gold & Silver Pawn Shop” on Las Vegas Boulevard South opened, and quickly became a hotspot for people to go for pawning.

Rick always wanted to have a pawn shop himself, and by the time he attended high school, he had grown pretty good at the whole bargaining thing.

Eventually, after ninth grade, Rick dropped out of school altogether.

So what was the secret behind the family’s early success in pawning? Well, Richard didn’t want to limit himself to just coins and gold. As a result, he started accumulating knowledge on stuff like vintage cars, firearms and different antiques in order to push the business further.

In the end, Richard knew everything about everything, and Rick quickly learned to take after his father.

Their relationship sure was a special one.

“When I was 16 years old, I tried to act all tough and told him “F you” to him. He punched me in the face,” his son Rick Harrison recalled in an interview with Fox in January of 2020.

“I’m laying on the ground. He looks at me and says, “Old enough to talk to me like a man, old enough to get your ass beat like one.” I just got up, walked away and never said another word about it. He really changed my perspective on life and how words have meaning. That was one of the greatest life lessons he ever gave me… He was just an amazing individual. He taught that no matter what, you always take care of your kids, your family. If you have kids, you’re a father for the rest of your life. He was an old school kind of guy that I think we need more of.”

Today, the store has thousands of items in its inventory. The pawn shop scaled even greater heights in 2009, when it got picked up for a show on the History Channel, famously known as Pawn Stars.

The show has since been a massive success. Rick Harrison and his family members won the ASCAP Film and Television Music Awards for Best Television Series in 2011, 2012 and 2013. In addition, the show has been nominated for three Critics Choice Television Awards.

Rick’s father, though, didn’t like the idea of doing a show in the beginning.

“He thought it was the craziest, stupidest thing he’d ever heard,” Harrison told Review Journal.

“I remember telling him, ‘Dad, you’ve got to come in Saturday for the sizzle reel.’ And he looks at me and says, ‘Rick, you’re never getting a bleeping TV show. It’s just not going to happen.’ I begged him to come in that Saturday. But we had to have him. He was the grumpy old man that everyone loves.”

“At first, I just thought a season or two would be good for business,” he added. “It’s really bizarre. I’m just a fat pawn broker, and now I’m known all over the world.”

In 2018, the Harrison family suffered a tragic loss. Richard “Old Man” Harrison passed away age 77 after a long battle with Parkinson’s disease.

Following his passing. Rick paid a beautiful tribute to his father.

“He will be tremendously missed by our family, the team at Gold & Silver Pawn and his many fans the world over,” he wrote on Instagram. “He was my hero and I was fortunate to get a very cool ‘Old Man’ as my dad. That I got to share him with so many others and they got to see what a great family man he was is something I am grateful to have experienced with him.”

“I think about him every day. I had a different relationship with him,” Rick said.

Rick Harrison has continued to work hard at the Gold & Silver Pawn Shop, alongside his son Corey Harrison and his friend Austin “Chumlee” Russell.

2020 was a strange year in many ways, but foremost, the COVID-19 pandemic paralyzed big chunks of society and limited most businesses. In Harrison’s case, it was a tough blow.

The pawn shop is still open, but according to Harrison, the business has shrunk from taking in more than $4,000 per day to around $400 per day.

Pawn Stars has been airing since 2009, and during that time there’s been a staggering 577 episodes. Even though the pandemic was – and still is – a serious problem, History Channel shot its 25 episode of the 17th season of the show in July of 2020.

“We have this whole lockdown going on, and networks cannot cast new television shows,” Rick Harrison told PodKats!, as quoted by Review Journal. “Basically they are running low on content, so they came in and asked if we can start airing early. I said, sure, I need some business making money here.”

When “Old Man” passed away, Rick inherited some of his father’s assets. And even though business from the pawn show’s was rather bad during 2020, he’s made himself a fortune.

According to Celebrity Net Worth, Rick Harrison has a net worth of an estimated $9 million these days.

So what is Rick Harrison doing besides running the pawn shop, being a television celebrity on Pawn Stars and mixing drinks at his restaurant?

Well, Rick has epilepsy, which left him wanting to work with the disease and educate others.

He’s on the board of the Epilepsy Foundation and does plenty of charity work himself.

“I do a couple hundred hours a year, raising money for them, interacting with kids, and basically having a good time doing it,” Rick told Fox. “We support research. We pay for kids’ medicine, we pay for doctor visits, we want to raise awareness. There’s always been a stigma associated with epilepsy.”

Rick hopes that people will be more aware of what epilepsy really is, and how to handle it.

“If you have a seizure, you’re going to know it,” he explained. “There are some people, you have, like they’ll have small seizures when they sleep and they don’t even know it. It’s a disease that I think just a lot more people need to know about or maybe need some more awareness about it, and hopefully I’m going to find a cure for it one day, well, not me, the Epilepsy Foundation, not me.”

Pawn Stars has been running for over a decade, and viewers can’t seem to get enough of Rick, his customers and the many amazing objects that find their way into the pawn shop.

So what’s the recipe behind its success? According to Rick, it’s all about the authenticity of the show. For him, it’s not a reality show like the rest.

“First off, most reality shows are pretty much scripted. Mine is not,” he stated. “And it’s truly different every week. You can have a show about motorcycles or cars, but there’s only the only so much you can do with a motorcycle or a car every week. And people want to learn, but they don’t want to feel like they’re sitting around with a professor. I give all the history lessons and I make learning entertaining on the show.”

The show recently aired in France, which has been a big challenge. But even though Rick Harrison’s most comfortable behind the counter of his pawn shop in Las Vegas, he’s like a rock star all around the world.

“Seventy-five percent of TV shows in France have to be made in France, so it was very difficult to be on there,” Harrison said. “They are watching the very beginning of the show right now, so I’m like a rock star there and before the lockdown 15 percent of my business was French.

“I went to Buenos Aires and was mobbed. Last season, when we were filming in Rome, everyone’s running up to me. In Kuala Lampur, they know who I am.”

I really enjoy watching Rick and the others on Pawn Stars. Please, share this article if you also love the show!