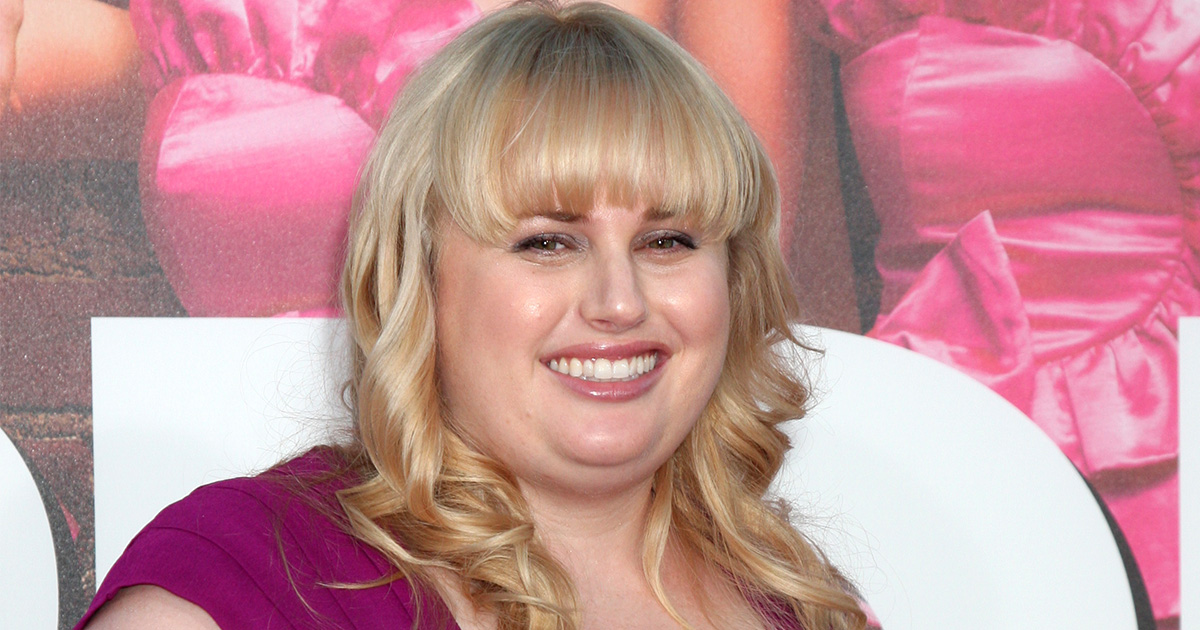 Rebel Wilson has turned into a major star following her many great performances in both film and television.

The Australian actress, known for roles in films such as Pitch Perfect and Bridesmaids, had – like the rest of the world – a very special 2020.

But it would appear Wilson used her time wisely, working out and forging herself a whole new lifestyle. A year later, she’s lost a stunning 60 pounds – and she looks amazing!

The COVID-19 pandemic truly ground the world to a halt in many ways. Millions of people around the globe have lost dear family members and friends, not to mention the fact that people can’t work as they used to or meet up with their relatives and loved ones.

As much as the pandemic is boring and can make everyday life feel endless, some have used it to their advantage. People have found ways to keep busy at home, with some trying out new hobbies or working on ways to better themselves with the future in mind.

For actress and comedian Rebel Wilson, the COVID-19 pandemic has meant a big change to her life. She declared 2020 her “Year of Health,” and, as of about 12 months ago, she’s been working out, as well as eating healthily according to a new diet.

The Pitch Perfect actress has had great success with her new diet and lifestyle, having lost more than 60 pounds. Now, she looks as stunning as ever!

So who is Rebel Wilson? And where did she come from as an aspiring actress? Here’s all you need to know.

Rebel Wilson didn’t have Hollywood in her backdoor growing up.

She was born March 2, 1980 in Sydney, New South Wales, Australia, and by the time she was a teenager, she knew that acting was her thing.

Wilson studied at the Tara Angelican School for Girls in western Sydney. Later on, she moved to the Australian Theatre for Young People (ATYP). At the same time as she was studying at ATYP, she attended the University of New South Wales, earning her arts/law degree.

Rebel Wilson was determined to be like Dame Judi Dench, and had never initially considered becoming a comedian. She thought of herself instad as being a very dramatic actress. Before long, though, Wilson knew what specific field she wanted to pursue her dreams in.

“I was in a play at Sydney Theatre Company and I thought I’d made it,” she told Vogue. “I was 19 and thought I was playing a dramatic role and as I got on stage people just started laughing at me and I was like: ‘What am I doing?’

“It was very confusing that first show, and then I just leaned into that and realized that there is something people find funny about me, so I just kept doing it.” Wilson added. “Only when I got the ATYP international scholarship from Nicole Kidman did I realize I wanted to specialize in comedy.”

Wilson wasn’t only a talented actress and comedian.

In school, she achieved amazing results, getting a 99,3 (out of 100) in her Higher School Certificate. But when she got the scholarship, she knew that was her dream to pursue.

Wilson received the chance to study in America via the scholarship, and moved to New York City, where she trained with improvisational comedy enterprise The Second City.

Rebel didn’t quite represent the Hollywood way. For her, it wasn’t all about being the perfect girl with a fit, lean body. Looks don’t make anyone the best actress around, and Wilson showed the world of show business just that.

From the beginning of her acting career, she played with stereotypes, as well as creating roles for herself.

In 2003, she started out working in the comedy series Fat Pizza, as the character Toula, a food-loving big girl who was in charge of an overweight gang called “The Fat Chick 12”. However, since it was a comedy, there were actually only six people in the gang.

Wilson never really thought of her weight as a problem, and she was definitely right to have not. Things should never really be about how you look, though Hollywood – as we all know – dances to the beat of its own drum.

Speaking with The Telegraph in 2020, Wilson said that she was actually paid large amounts of money to remain ‘big’ for upcoming roles in films and television series. But now, she sees it differently.

“I literally feel as if I have to physically transform myself, because for some reason, even though we’re in a very imaginative industry, it’s very difficult for people to imagine me as a serious actress and I feel that I physically have to show you that I am different,” she said.

Rebel Wilson loved school, and the scholarship she got to study in the US made a big impact.

She was the last of 16 young actors to receive the chance to go abroad through the program funded by Oscar winner Nicole Kidman. In 2013, Wilson made sure she gave back.

“We’ve [her and Nicole Kidman] spoke about it since,” Rebel told Huffington Post. “I really did thank her, and I donated the money back to the college two years ago, so they can use it for all their current projects and new actors.”

In addition to helping young Australian actors and actresses, Wilson has a big heart when it comes to helping others. She’s a great role model and inspiration for others to stand up for what they believe in, and has sponsored many children at a school in Tanzania.

Let’s face it, Hollywood is mostly made up of American movie stars. That said, Australia has had its fare share of huge celebrities, too, including Nicole Kidman, Cate Blanchett, Hugh Jackman, Geoffrey Rush and, of course, Rebel Wilson, among others.

Why is that? Wilson thinks she has the answer.

“There was this study that said, in Australia we have wide open spaces, and we’re this very expansive country,” she explained. “Therefore, naturally, Australians have an ability to fill a room, or their presence is bigger than people from very densely populated areas. It’s a natural thing.”

So what happened to Rebel Wilson following her big break in the US? Well, through meeting comedians Jason Segel and Amy Poehler, she got some great advice, as well as pitching herself to several comedy shows.

In 2011, she got her big American breakthrough, starring as Brynn in the comedy Bridesmaids. The film was nominated for two Oscars and sparked the next step in Wilson’s career.

“With Bridesmaids, it didn’t start it, but that movie was such a success that now all studios are looking for ensemble movies with female roles that are all funny,” she explained. “Which used to happen with male comedians while females were the love interest, and now with Bridesmaids and Pitch Perfect it’s all flipped around.”

In 2012, Rebel Wilson starred in the comedy Pitch Perfect, which became a huge success. She was then in both Pitch Perfect 2 and Pitch Perfect 3. It set her up for several other, great jobs in films. In 2019, she appeared in the Oscar winning film Jojo Rabbit, but it’s been tough for her to get work due to the COVID-19 pandemic.

Yet for Rebel Wilson, the year 2020 gave her a whole new project to get stuck into. For her, it was the “Year of Health,” in which she started working out and eating healthy. Through that, she lost an incredible 60 pounds!

Both Rebel Wilson and comedian James Corden appeared in the heavily criticized musical Cats. But it was the turning point on a personal level for Wilson, as she started losing weight.

“I lost eight pounds, shooting my number, in four days,” Wilson recalled in an interview with ET Online. “One, because there’s a lot of physicality, but also, they heated up the set very high, to almost 100 Fahrenheit, so that we could never cool down.

“These people are like, the best dancers in the whole world, so they can’t cool their muscles down or they could get an injury and they’d be out of the film,” she added. “So they’d heat up the set like a sauna so we would never cool down, but made it pretty uncomfortable.”

Rebel Wilson wanted 2020 to be a healthy year. She began the year by writing a letter to herself, saying that she was going to give it all during 2020. And she sure did!

Speaking on Drew Barrymore’s talkshow, Wilson said that she had previously suffered from emotional eating due to the fame. Sometimes, she’d eat around 3,000 calories per day.

“There is a lot of stress that comes with it, and I guess my way of dealing with it was just eating donuts,” Wilson said. “So I was working on the mental side of things of ‘why was I not doing that? Why was I not valuing myself and having better self-worth?'”

Diet and working out

It was time to make some changes. On January 2, Wilson shared some pictures of her taking a walk along the beach. She decided to change her lifestyle, avoiding sugar and junk food, while drinking more water.

At the same time as Wilson started working out on a regular basis, she also followed a restrictive program called the Mayr Method. It claims to promote weight loss by improving the gut health.

We want to be very clear that these kind of methods don’t work for everybody. And – just like Rebel Wilson – you should always speak to your doctor before starting a special diet program like this.

In any case, Wilson told People that she achieved amazing results with the method. It’s based on the “Mayr Cure”, created by Austrian physician Franz Xaver Mayr, M.D. Rebel visited his luxury medical detox and wellness center in order to get started.

While applying this method, Wilson eliminated sugar and caffeine. It suggests special eating habits like chewing food up to 60 times as well as eliminating snacks and reducing gluten and dairy products.

However, she’s also clear on the fact that you have to enjoy the tasty things in life once in a while.

In October of last year, Wilson posted a video on her Instagram enjoying a pastry in Monaco.

“Remember though girls, you still gotta treat yourself,” she wrote. “I just do it with food now only once or twice a week and substitute bubble baths on alternate nights.”

Speaking to People in November of 2020, Wilson said she had stayed a second time at the luxurious center in Austria.

“I went back because 2021 is going to be an insanely busy year with project after project.” she said. “So I wanted to come back to VivaMayr.”

Wilson’s also now working out up to six times a week, and going out for walks with a trainer.

“What I was trying to do is change those habits so that you’re more loving and you’re treating yourself with more respect,” she explained. “I’m working on self-love, and that’s a hard concept to master. To foster self-love.

“I like to end in gratitude and write down what I’m blessed about. Even if it’s something very small … that’s amazing.”

Rebel Wilson has been working hard on reaching her goal for 2020, a very special year for all of us. We love to hear that she’s feeling greater than ever about herself, and hopefully, she will inspire others to also life a healthier life.

Please, share this article with friends and family if you also think Wilson looks amazing!