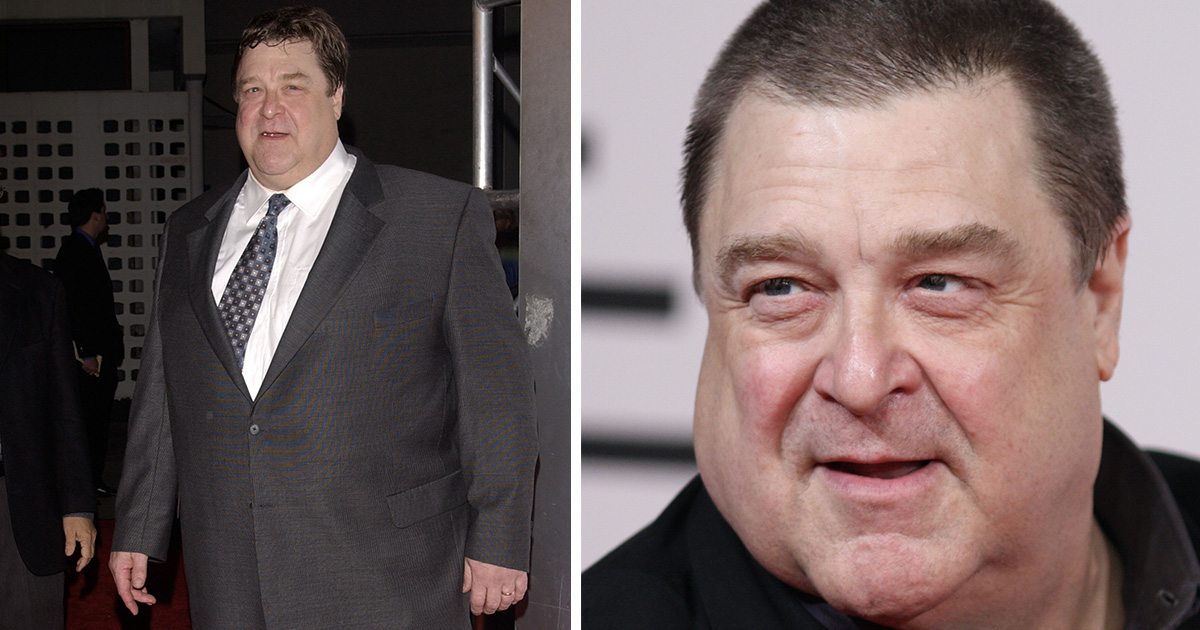 John Goodman might be a huge Hollywood star, but the truth is that the family man behind what the public sees just wants to be like everyone else: Normal.

The well-known celebrity has been through plenty in his life, from depression to drinking problems. But in the end, family is the most important thing for him, and he’s now dropped over 100 pounds in weight! Take a look at his amazing transformation!

John Goodman always wanted to be an actor. As a young child, he found his passion for acting, which would evolve into a successful and long career filled with amazing roles and awards.

Through the years. Goodman has created a wonderful family, and a place to call home in New Orleans. But he’s also been through some pretty dark times, not at all helped by depression.

These days, Goodman’s been sober for many years, and focuses on his love for his family and acting. In addition. he’s lost a lot of weight, making him even more inspiring than before!

John Goodman always had the dream of becoming an actor.

Goodman was born on June 20, 1952 in Affton, Missouri, to father Leslie Goodman, a postal worker, and waitress Virginia Goodman. At just two years of age, he experienced tragedy when his father passed away after a heart attack. It left Virginia to raise Goodman and his two siblings on her own.

Goodman was always interested in the art of acting. As a kid, he loved watching the television series Have Gun – Will Travel, starring Richard Boone, and also held aspirations of becoming a radio DJ.

There was something about working in radio that attracted him, and he held a dream of going into that profession for a long time.

“There was one guy that I was hooked on every night,” Goodman said on Late Night with Seth Myers.

“Plus we got to listen to old time radio dramas when I was a kid. Everything coming over the radio I loved, there was something about one guy talking to you. Up until I was in college, I thought I could pull this off.”

Goodman went to Affton High School, where he proved himself to be a great athlete, playing football but also doing plenty of theatre work. He got a scholarship to play football at Missouri State University, but an injury crushed his dreams of making it professional.

Instead, he moved on to study drama at Missouri State University, studying alongside actresses such as Kathleen Turner and Tess Harper. He quickly fell in love with it.

In 1975, with Goodman 23 years old, he realized he needed to move from Missouri to pursue his dream of becoming an actor. So he headed to the one place to be: New York City. He took a loan from his brother and rented an apartment near the Manhattan theater district, together with his girlfriend.

However, being a young aspiring actor in New York wasn’t easy. Goodman didn’t have contacts, money or an agent, and his mother didn’t really understand why he was going to pursue a career in a profession she didn’t know at all.

Speaking to The Guardian, John explained that the first few months in New York were “pretty terrifying”. He was overwhelmed with the city, first and foremost. At the same time, just being able to make it through the day was a problem.

Every day, Goodman woke up and went looking for auditions just to get his name out there so that he could later join an actors’ union. He sent headshots to several regional theaters and advertising companies – but nothing happened.

“There were times when I’d run out of money,” he says. One night, “I had some beans on the stove. I left them on the stove to simmer and I got locked out of the apartment so they were gone. And that was the last meal for a while.”

Times were tough, and Goodman worked as both a bartender and waiter to make ends meet. He was also able to land some smaller work in the form of commercials and voice overs. Together with actors Dennis Quaid and Bruce Willis – who was also struggling at the time – he finally got a job in the Broadway production Loose Ends.

But it was a flop.

The year before, in 1977, Goodman made his off-Broadway debut in the film Jailbait Babysitter. But times soon would soon get better for the struggling actor, as he scored a role in the television film The Face of Rage (1983), along with several smaller parts in other films and series.

In the 1980s, Goodman would finally get his big breakthrough. He starred as Pap Finn in Big River (1985) and again the same year in David Byrne’s True Stories. Goodman never let his dream of being an actor bring him down. In 1987, he got a role in the Coen Brothers’ cult-classic Raising Arizona (1987), in which Goodman starred alongside Nicolas Cage.

John was finally on the rise in show business. Then, in 1988, everything changed for the better once again.

While working on Antony and Cleopatra in 1987, a talent scout thought he would be perfect for the role of Dan Conner on the new sitcom Roseanne.

He was cast as Conner on the ABC TV series, and the show became a smash-hit. John Goodman was stardom-bound. He went from being just a character actor to holding down a leading role.

“He’s like a lot of guys I know. In the wintertime they don’t work because construction is sporadic. I don’t want to have to stand for the American workingman, but if this guy’s gonna be one, I’d rather have him be semi-intelligent, not a dumb beast who sucks down beer all day.”

The chemistry they shared on stage wasn’t just through acting, but something they had off-screen as well.

“We got along right off the bat,” Goodman explained. “We made each other laugh. That’s one of the keys to the characters: They really adore each other.”

John Goodman became a star overnight, moving to the film-Mecca of the world, Hollywood. However, fame wasn’t for him. He lived in a tiny apartment in Hollywood, feeding hummingbirds from his porch.

“I’m apprehensive about fame,” he said. “I’ve known people whom it bothers a great deal, and I’m kind of a shy person. Lately people are starting to put my face with my name, instead of thinking I’m either somebody they went to high school with or did time with.”

John had gotten his big breakthrough, and soon, he was on the biggest stages receiving awards. He won a Golden Globe for Best Performance by an Actor in a Television Series – Comedy or Musical in 1995, as well as an additional four nominations. Goodman was also nominated for seven Emmy’s for his work on Roseanne, with the series winning thee Golden Globes and three Primetime Emmy’s.

“I went to this Halloween party, and she walked up to me and said, ‘Hi.’ I couldn’t figure out why anyone that pretty was talking to me,” Goodman told Elle.

The couple fell in love and got engaged on the Mississippi River. In October 1989, they tied the knot, and a year later they welcomed daughter Molly Evangeline Goodman to the world.

John Goodman, by now hugely famous, started a family. Life seemed to be great; he didn’t have to burn the beans on his stove and could now even buy his mother a house. However, through it all, he was battling with drinking problems, as well as depression.

In an interview with the Guardian, Goodman, who lost his father at just two years old, spoke about his battle with personal demons.

He explained that as a young actor, he struggled with his depression and would have panic attacks before walking on stage.

“Absolutely terrified, paralyzed. I couldn’t remember my first line,” he explained. “I was just sweating and I was about to say: ‘I’m sorry, folks, I can’t.’ And I opened my mouth and my first line came out and it [the panic] was gone, I don’t know where it came from.”

Today, Goodman’s learned how to recognize the warning signs and can prevent anxiety and depression through working out and doing other activities.

Along with his fame, he also struggled with drinking, smoking and obesity, and these things soon became problems. Speaking with Today, he said that he even drank on set. At the height of the Roseanne‘s success, Goodman lost it.

“At first it was exciting,” he said. “Then it got frightening when I lost my anonymity.

“I got complacent and ungrateful. And after nine years—eight years, I wanted to leave the show,” he continued. “I handled it like I did everything else, by sittin’ on a bar stool. And that made it worse.”‘

Fortunately, Goodman had great support from his wife, Anna Beth, and in 2007, he checked into rehab. Since then, he’s been sober and his family now lives in New Orleans, Louisiana.

Even when his daughter Molly was very young, he knew that he didn’t want his family to live in an environment where they would be followed around by the press.

“I’d had it with show business, publicity, tabloid stuff – I’d just had it,” he said. “I kind of wanted to get her, my daughter, away from that.”

John continued his work in films, voicing Sully in Monster’s Inc. (2001) and starring in the cult film The Big Lebowski (1998).

The Coen brothers chose to cast him in six of their films, including O Brother, Where Art Thou? (2000) and Inside Llewyn Davis (2013).

Through his career, John has struggled with his weight. His all-time highest weight was almost 400 pounds.

“I’d get off of Roseanne every spring. I’d lose 60 pounds every spring,” he told David Letterman. “I’d gain it back and then some, every year. It’s going to be an ongoing process for the rest of my life.”

Following a stint in rehab for his drinking problem, Goodman decided it was time for a change. He hired fitness guru and personal trainer Mackie Shilstone – who had worked earlier with tennis star Serena Williams – and soon he was on a path towards a healthier life.

He stuck to a diet full of Mediterranean food, including fish, nuts, olive oil, vegetables and fruit, and worked out five to six times each week.

Following his dedication towards a new diet and working out, Goodman lost over 100 pounds. He looks amazing!

“This didn’t happen overnight — it’s been an ongoing process,” Shilstone told New York Post. There needs to be strategic planning. This time, he really wanted to do it.”

John Goodman is probably one of the best character actors in Hollywood, and has shown himself to be a great person as well. We wish him and his family all the best in the future.