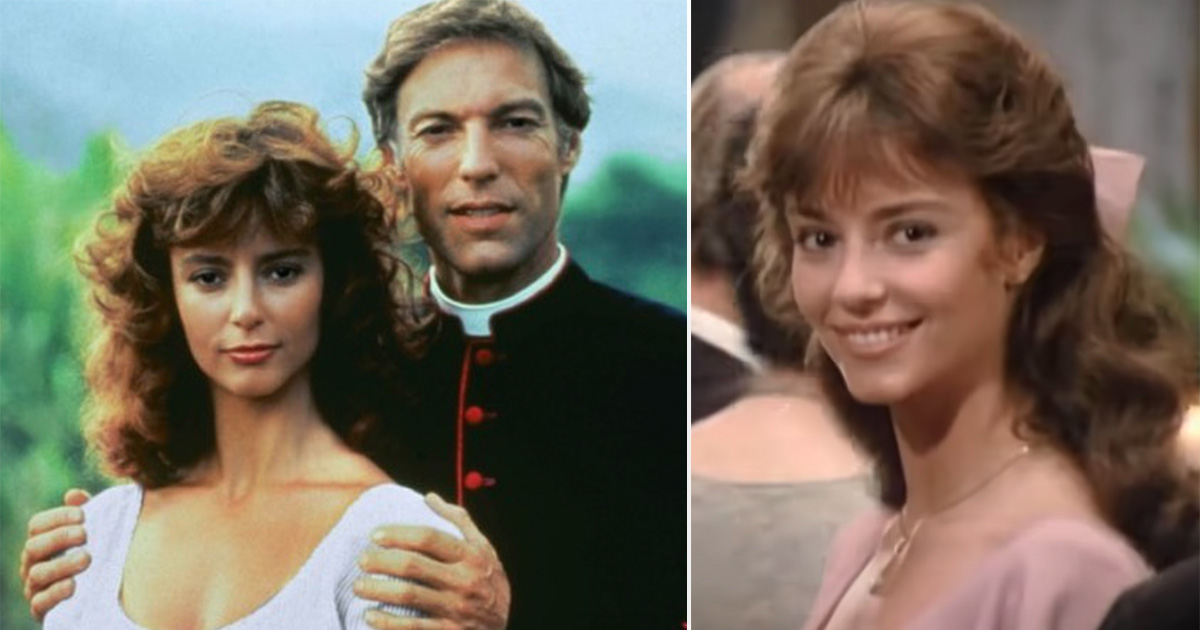 It wasn’t certain that Rachel Ward was going to get the role of her lifetime, as she starred as Meggie Cleary in the classic mini-series The Thorn Birds.

The British actress and model has had a long and varying career, spanning decades. Now, she’s settled in Australia with her husband, whom she fell in love with on set.

So what really happened on The Thorn Birds? And why did the mini-series become such a huge success?

If you were to debate which television series is the best of all time, you’d probably get a different answer from every person you talk to. Firstly, there are so many different kinds of series, and of course, we all like different things.

But usually, the most popular television series are those that aired for many years, broadcast on television with several seasons and many strong and independent characters.

Bonanza, Little House on the Prairie, Friends, Sopranos or Twin Peaks. The answer to which one reigns supreme will probably never be decided, and to be honest, that is also one of the most fantastic things about television.

There will always be a series that sticks closer to the heart than others.

Even though we have more established series that last for years, there are several examples of miniseries that weren’t meant to stick around long, but still reached cult status.

One of those was The Thorn Birds, starring Richard Chamberlain, Rachel Ward, and Bryan Brown.

It was first broadcast in March 1983, and over 30 million people in the US watched the ten-hour miniseries, based on Colleen McCullough’s 1977 Australian novel The Thorn Birds.

The mini-series gained huge interest and was praised by both the audience and critics, winning several awards, both for its story as well as the actors’ performances.

Ten hours long and spread over five nights, The Thorn Birds is still to this day considered a classic that will live on for many years to come.

Rachel Ward starred as Meggie Cleary in The Thorn Birds, but at the time, it was pretty much a surprise when she got it. It turned out that the producers had difficulties in finding the perfect person for the role, but in the end, Ward was the perfect choice.

Not only did Ward get her big breakthrough by starring in the television mini-series, she also found the love of her life on set.

This is the story of Ward – and how she travelled the world to keep her passion for films and television series alive.

Born on September 12, 1957, in Cornwell, Oxfordshire, England, Ward studied at the Hatherop Castle School in Hatherop before attending the Byam Shaw School of Art in London. However, at just 16 years of age, she left school to pursue a career in fashion.

Ward became a fashion and photography model, appearing on covers for Vogue, Cosmopolitan, as well as Harper’s & Queen. She slowly made her way into the acting scene after she was featured in several commercials.

Years later, in 1995, she would earn her Graduate Diploma of Communications and a Graduate Certificate in Writing from University of Technology, Sydney, Australia.

In 1979, Rachel Ward appeared in her first television movie, Christmas Lilies of the Field. In the years that followed she would have a number of smaller roles, but in 1983, she would become a well-known actress all over the US.

Stan Marguiles was one of the producers on The Thorn Birds. But casting the right people to appear in the show wasn’t the easiest task.

In 1982, he explained the difficulty.

However, when they saw Rachel Ward, they were sure that they’d found the right one for the role of Meggie Cleary.

“She has to go from 18 to her early 50s. From a rather naïve, overly romantic young girl to a bitter woman in her 30s, to a woman who finally understands where she took the wrong turn when she reaches her 50s. There’s an enormous range of emotions and colors,” he said.

“They first started to age me, it was kind of scary,” Ward recalled. “I had these endless double chins. I sort of had a body suit underneath the clothes, I remember liking it when I grew older, I liked the outfits, there was slightly more masculine than they were in the beginning.”

Over 200 women were considered for the role of Meggie Cleary, and a total of 40 actresses auditioned.

Speaking with the National Film and Sound Archive of Australia, Ward recalled her audition.

“My audition was quite light and I had a sense of humor” she said. “I remember I was taking it seriously but I wasn’t acting with a capital A. It is so subjective, performances pieces, and I was probably spot on the first time. I got like 10/10 for looks and 4/10 for acting.”

They sent Ward to work with an acting coach, and it was a great match. Starring alongside Richard Chamberlain as Father Ralph, Ward became a beloved actress, praised by viewers as well as critics.

In 1982, she was nominated for a Golden Globe Award for Best Performance by an Actress in a Miniseries or Motion Picture Made for Television.

Chamberlain received a Golden Globe Award for Best Performance by an Actor in a Miniseries or Motion Picture Made for Television. The show itself won four Golden Globes, including Best Miniseries, as well as six Emmy awards.

Ward wasn’t an actress that crafted her skills through school, but rather she learned as time went by. As the show aired, she saw herself as the weaker link. She suffered from insecurity for years after she received some negative reviews (The New York Times said she was “miscast”).

“I felt terribly like I’d disappointed,” she told Closer. “I felt that despite me it was a success.”

However, years later, her grown daughter watched The Thorn Birds, and told her mother, “‘Mom, you were fabulous,'” Ward recalled. “That was, for me, the most important response that I could’ve ever had.”

”It was soap opera. I think of it differently now,” Ward said. “Acting styles have changed and mine was always quite natural. And I think they tried to make me something that I wasn’t naturally. So that’s the excuse that I’ve made for myself.”

Her performance in the 1983 miniseries The Thorn Birds was of course a very important step for Ward, career wise. However, the production of the show became much more important for her, since she met the love of her life.

During her work on The Thorn Birds, Rachel Ward and Chamberlain’s characters Meggie and Father Ralph had great passion between them, which kept the viewers coming back.

Chamberlain recalled that it was difficult filming specific scenes.

“There’s a microphone hidden in the armpit… and you’re trying not to smear her lipstick,” he told Closer.

Even though Ward and Chamberlain were in love on camera, the great love story was actually when the cameras were turned off.

Bryan Brown starred as Meggie’s husband Luke O’Neill, and while shooting, they fell in love.

“What happened on screen was happening off it – that’s why our love scenes were so believable,” Ward told the UK’s Daily Express.

“Everyone on set realized they were falling for each other. “I’ve never seen two people more in love,” Chamberlain said, adding that Brown even helped Ward calm her nerves before shooting. “She seemed to get happier and happier and her work got better and better.”

Ward and Brown obviously had “sexual chemistry” on set. She really fancied him, however, when asked who made the first move, she made sure to throw her beloved husband under the bus.

‘He as slow as a wet week. Really took forever. I think I probably did,’ she said.

Brown, however, insisted that he was just being a “cunning Aussie bloke” not approaching her at once.”

“And before they know it, they’re hooked!” the legendary actor joked.

Rachel Ward and Brown got married months after the filming of The Thorn Birds wrapped.

The couple went on to have three children, Rose, Matilda and Joseph.

So what happened to Ward following The Thorn Birds?

She and Brown moved to Australia, where Ward starred in several films and television series.

Rachel Ward – this is her today

In 2001, she was nominated for a Golden Globe for Best Performance by an Actress in a Miniseries or Motion Picture Made for Television following her performance in the film On the Beach.

Her other credits include The Big House, Martha’s New Coat and television series Rake, Devil’s Playground and The Straits.

Besides being an actress, wife, mother, and now grandmother, Ward also made sure to contribute to society.

Therefore, in 2005, she was awarded the A.M (Member of the Order of Australia for “raising awareness of social justice through lobbying, mentoring and advocacy for the rights of disadvantaged and at-risk young people.”

In May of 2019, Ward and Brown became first-time grandparents, when daughter Matilda Brown welcomed son Zan.

Both Matilda’s parents were present when she gave birth, which was truly special for her.

“When I was pushing Zan out at the end, dad was stroking my head and mum was cheering me on, crying, saying, ‘Come on, Till! He’s so close,'” Matilda said. “It was pretty special that both my parents got to be with me through such a monumental time in my life.”

Just days ago, Ward got to see her newborn granddaughter, which she shared on her Instagram.

And on another note, isn’t Matilda just the spitting image of her mother!

Ward and her daughter Matilda both chose acting as their job.

However, when Matilda first said she wanted to become an actress, her mother wasn’t that excited.

Spitting image of her mother

“Mum definitely said ‘don’t be an actress,'” Matilda recalled. “She encouraged me to go to film school and get behind the camera, which I did and I’m very glad I did.”

In 2016, they teamed up in the film The Death and Life of Otto Bloom. Rachel and Matilda play the same character at different stages of her life

“We look alike so obviously there’s a great bonus in that we share physical similarities and mannerisms,” Rachel Ward said. “Plus, as we know, women over the age of 40 are basically invisible in the media and in film … It’s a treat when something comes along where it’s ok to be in your 50s.”

Rachel Ward was wonderful as Meggie Cleary in The Thorn Birds, and we’re so happy to see that she still is as passionate today.