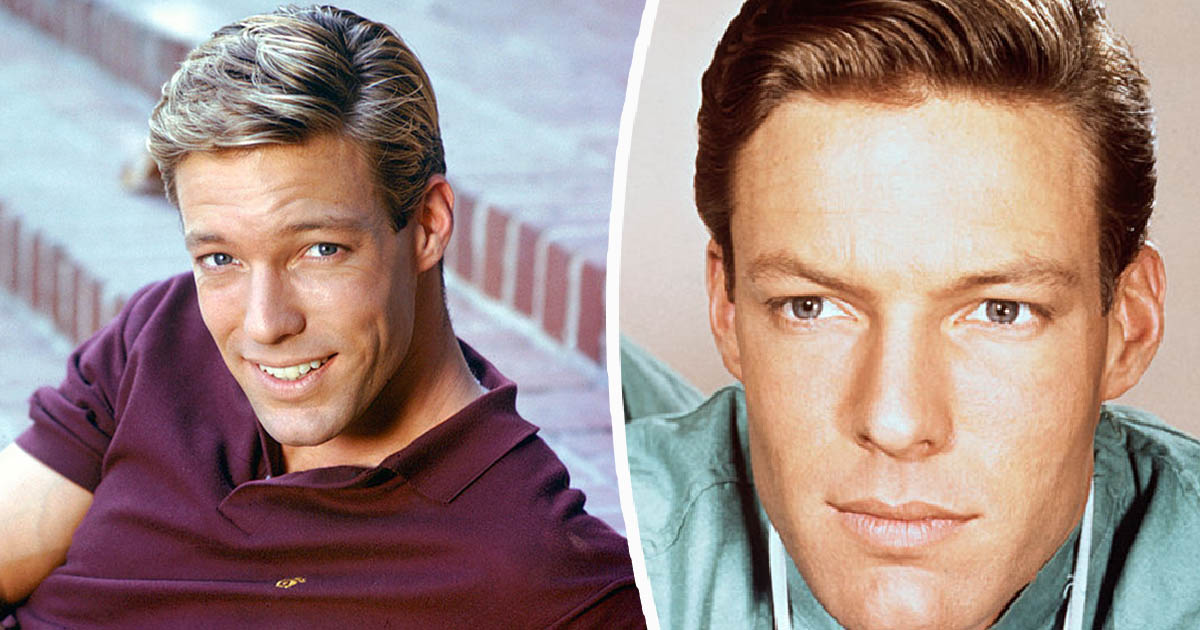 People all around the world, both young and old, fell in love with Richard Chamberlain when he rose as a popular actor in the 1960s.

In my mind, he was the single biggest heartthrob on television at the time, and had roles in numerous popular shows and movies.

Chamberlain’s been through a lot in his life, including the weight of hiding a big secret for many, many years. This is him today at 88.

There are many things about the 1960s I never will forget. One of those things was watching TV. More specifically, my absolute favorite, Richard Chamberlain, playing the fabulous role of Dr. Kildare.

Chamberlain was perfect for the role – and I think this quote sums it up.

”The slim, butter-haired hunk with the near-perfect Ivy-League charm and smooth, intelligent demeanor, had the distaff fans fawning unwavering over him.”

Yes, I was one of those fans, and there were undoubtedly more like me, as Richard will confirm later on in this article.

Of course, Richard Chamberlain was more than just a handsome Dr. Kildare.

He portrayed several eminent characters but, at the same time, led a tough life. He loved the fame, but it was also something he couldn’t escape from.

Not only that, but he had been carrying the secret of being gay for a long time. This is the story of the wonderful Richard Chamberlain – and this is him today, age 88.

Richard Chamberlain was born on March 31, 1934 in Beverly Hills, California. As a child, Richard loved listening to the radio, particularly to radio dramas and mysteries.

He didn’t enjoy school, but at the same time didn’t think he had the courage to be an actor. That changed once he figured out his true life calling.

”We used to go to double-bills on a dime and I thought, ‘Whoa, that’s a good place to be—up on the screen,’” he recalled.

”I was always fascinated with the idea of being an actor. The problem was I was always a little withdrawn, shy, and not very sure of myself. But the people up on screen seemed so confident.”

Chamberlain attended Pomona College, where his interest in acting grew. He landed several roles in their theatrical productions, for which he was praised.

Soon after college, he would turn to the studios to look for work, and Paramount Pictures showed their interest. However, the Korean war was happening, and in December of 1956, he was drafted into the Army to serve for 16 months.

When Richard Chamberlain returned to the United States, he already knew where he wanted to go – and that place was Hollywood.

He got parts in several productions, but it wasn’t until 1961 that he’d score the part which changed his life. Richard Chamberlain played Dr. Kildare in the medical series of the same name, and it turned into a huge success.

He wasn’t only praised by critics for his role but gained a huge fanbase. Suddenly, Richard Chamberlain was the golden boy of the 1960s.

”My self-esteem deep down was low, low low for various reasons. And so, having that kind of public adulation, was just wonderful. It was like a wonderful medicine. It was everything that I’d ever dreamt of, and being thought to be very attractive and everything, I thought it was just great,” Richard Chamberlain explained on Emmy TV Legends.

”I used to be chased around supermarkets. I had a convertible stingray, and girls would chase me around in the hills, but I usually managed to escape. When travelling with my parents in Switzerland, we were at some mountain top when someone came up and asked me for my autograph. And my father said ’now I know you really made it,’” Chamberlain said, laughing.

Dr Kildare aired in 1961. The series followed Chamberlain’s Dr. James Kildare – a young medical intern – and the relationship between him and his mentor Dr. Leonard Gillespie, played by Raymond Massey, at the fictional Blair General Hospital.

It was a huge breakthrough for Chamberlain, who won a Golden Globe Award for Best TV Star – Male in 1963. The show aired from 1961 to 1966 with a total of 191 episodes and was nominated for several Emmys and Golden Globe Awards.

So why was the medical drama so successful?

Working around the clock

According to Richard Chamberlain himself, it was all about the fact that Dr. Kildare was a doctor who cared about, listened to, and helped all of his patients. That made the show attractive.

”It was hugely successful right from the beginning all over the world. It was my ultimate dream come true, everything I had ever dreamt of for my own life and creativity, it was a phenomenal stroke of excellent good fortune,” Chamberlain said.

”I think people are fascinated by medical protection, of situations in life like this. Everybody knows that someday you’ll be sick, break something or another problem, and you’ll need a doctor.”

Richard Chamberlain had a contract with MGM then, but he didn’t have time to rest. First of all, he received an ”enormous amount” of fan mail and presents, but he just wasn’t capable of answering every single one.

Since Dr. Kildare was such a huge success, MGM saw its chance and took it. The studio decided to put him in several movies in between shooting the series.

”I never got any time off. And if their was a week or so off, they’d send me somewhere and do publicity. I took ballet classes and singing lessons after work, so I kind of escaped.”

Chamberlain wanted to do more than just be a “Prince Charming” type of actor for soap operas. He appeared in Twilight of Honor (1963) and Joy in the Morning (1965), but the viewers didn’t like them at all.

It all looked like he was destined to be a sweet and charming soap opera persona. However, Richard himself had other plans.

Instead of continuing work with the cinema, Chamberlain focused on creativity on stage, as he had in college. In 1966, he starred in several theatrical productions, including The Philadelphia Story and Private Lives, and even as Tony in West Side Story.

The theater brought Richard Chamberlain to England, giving him roles in classics like Hamlet in 1969 and Richard II in 1971. Following a number of years, he returned to the US to pursue a new chapter in his Hollywood career.

In the 1980s, Chamberlain would get his so-called revenge. He starred in Shogun (1980) and The Thorn Birds (1983). The second one was also a huge success abroad, and Chamberlain finally got the recognition he much deserved.

For his performance in The Thorn Birds, he received a Golden Globe Award for Best Performance by an Actor in a Miniseries or Motion Picture Made for Television. The show itself won several Golden Globes and also several Emmys.

”It was the absolute top of the heat of a soap opera,” Richard Chamberlain says.

Richard Chamberlain eventually returned to the theater, starring in several Broadway shows. He later decided to move away from the Hollywood spotlight altogether, relocating to Hawaii.

In Chamberlain’s career, he’d set young hearts on fire as Dr. Kildare and as Father Ralph in The Thorn Birds. He said his job was to be a ”hetero heartthrob,” but his friends and almost everyone in the business knew he was homosexual.

“You cannot do it, that being gay was the worst thing you can possibly be. I assumed there was something terribly wrong with me. And even becoming famous and all that, it was still there.”

Richard Chamberlain had years of therapy, going through various spiritual-raising experiences as well, to help him find his identity.

No matter what, he was brave and showed great courage in coming out, especially at the age of almost 70 years old.

Richard Chamberlain lived together with his partner, producer Martin Rabbett, for several years, but they then elected to live separately.

”We don’t live together anymore, and we’re much better friends than we’ve ever been,” Chamberlain said. ”So I’m in the business of advising people who are married, etc., to get another house.”

Richard Chamberlain was the golden boy of the 1960s, ranked at No. 7 in TV Guide’s list of “TV’s 25 Greatest Teen Idols”.

In 2000, he received a star on the Hollywood Walk of Fame. But despite now being 88 years old, he still shines bright and continues to star in productions.

As recently as last year, he played a part in the drama film Finding Julia. Also, he’s set to feature in the fictional drama Echoes of the Past, which as of November last year, was in post-production, according to its Facebook page.

On Facebook, a newly taken picture also was posted of Richard Chamberlain working on set – and wow, does he look wonderful!

In 2013, Chamberlain’s collection of poems, My Life in Haiku, was published. And the well-respected actor has proven himself to be a wise man following a life full of ups and downs, telling the world that you should always follow your dreams and be who you are.

”I’m discovering in my later days what it’s like to just be myself. I came from a family where we were all pretending to be perfect. We played into each others’ game of perfection,” Chamberlain told Palm Springs Life in October 2019.

”But just in the last couple of years, I’ve felt this wonderful freedom to really … just be myself.”

We will always treasure Richard Chamberlain for his wonderful roles and performances on stage. Hopefully, we’ll get to see him in many more productions in the years to come.