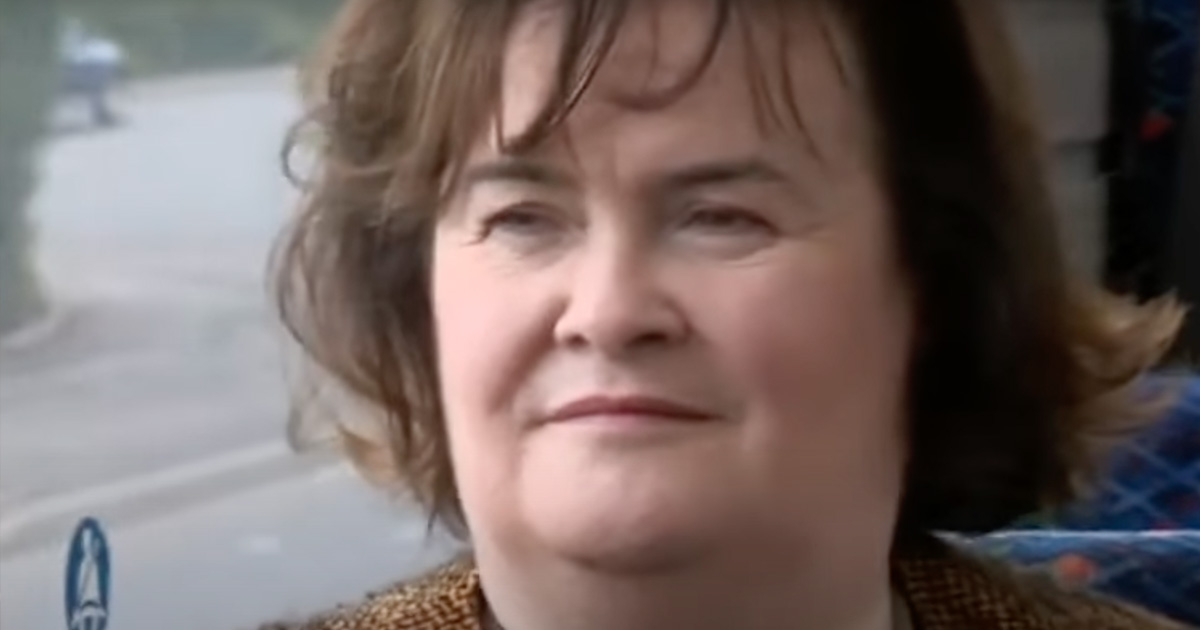 Susan Boyle became a star overnight following her audition on Britain’s Got Talent. She gained fame, as well as earned millions of dollars through album sales. However, her journey hasn’t all been sunshine and roses.

During her rise to fame, Boyle has been through several rough periods involving her family. This even actually led to her taking a break from singing altogether.

Some people will argue that you need to be young, or at least up-and-coming, to make it in the entertainment business. In show business today, many work on their dance routines, singing or acting from an early age to give themselves the best possible chance of making it.

But is that the whole truth? Of course not. If we were aiming to give you an example of someone that wasn’t 20 years of age when they made it big, it would have to be Susan Boyle.

The unemployed charity worker lived alone with her cat, Pebbles, and wanted to see if she could make it in show business aged 47. After performing I Dreamed a Dream from Les Misérables in front of Simon Cowell and the rest of the Britain’s Got Talent judges, she became a star overnight.

The crazy underdog audition gained her instant recognition across the world, and today, she’s got more money and fame than anyone could ever dream of.

“I used to be a kind of spectator looking outward at the world. But now I’m part of that world and, though frightening, I’m going to embrace it,” Boyle said.

Even though this was a remarkable thing for Susan, her life hasn’t been as easy as one might think. She later revealed how she’d been bullied as a child, and incorrectly diagnosed with a learning disability. Not only that, but following her audition, that captured the hearts of music lovers around the world, she’s experienced tough times with both family and herself.

So how did she get where she is today? And what really happened following her getting worldwide recognition?

This is all you need to know about Susan Boyle!

Susan Boyle was born on April 1, 1961. Her parents – Patrick Boyle, a miner, WWII veteran and singer, and Bridget, a shorthand typist – were both immigrants from County Donegal, Ireland. Boyle grew up as the youngest of four brothers and six sisters.

The family lived in a council house in West Lothian, Scotland. Still to this day, Susan lives in that house.

The day she came into the world was problematic. Boyle was deprived of oxygen, and later, she developed learning difficulties. Her teachers were ignorant regarding children with learning disabilities, and she’s spoken out previously about how she was beaten by her teachers, as well as taunted by classmates.

However, once she had become a household name, Boyle was told she had been misdiagnosed. In reality, it was Asperger’s syndrome she had, and an above-average IQ.

“You’re looking at someone who would get the belt every day… ‘Will you shut up, Susan!’ – whack!” she told the Mirror as quoted by Independent.

Boyle continued: “I was often left behind at school because of one thing or another. I was a slow learner. I’m just a wee bit slower at picking things up than other people. So you get left behind in a system that just wants to rush on, you know? That was what I felt was happening to me.”

Even though her childhood was tough, Susan found her escape in music. Her father was, as mentioned, a singer, and as an active member of the choir at her church, she loved to sing.

She had also auditioned on a few other TV shows. And it was all because of the support of friends and family that she had the confidence and courage to carry on.

“My family were the ones who were so supportive and pushed me to do something more with my life and my mother, in particular, was the driving force who made me promise I would do something with my voice and my life,” Boyle said.

Susan won many local talent competitions as a singer, and her mother urged her to enter Britain’s Got Talent. However, Susan thought she was too old and decided not to.

But, as we all know, eventually she gave in. She was finally convinced to go on Britain’s Got Talent in 2008, at 47. Let’s just say it turned out to be a good idea.

Just one year before, Susan had gone through a major tragedy when her mother Bridget passed away, age 91. Susan and Bridget had been very close, and her passing led Boyle down a very dark path.

“I was very lonely and very upset. There was a kind of numbness to begin with, because you don’t know what’s happening, but then it hit me like a ton of bricks. My health went down,” she said.

“I had panic attacks and felt I couldn’t cope. I didn’t eat or sleep properly. I’d had everything done for me. But the rest of my family helped pull me through. I think I still struggle with my independence a bit, because I depended on my mother so much – although I have a lot more help nowadays.”

Boyle’s magical audition in front of Simon Cowell and the rest of the judges was the first time she had sung in public since her mother’s passing. She blew everyone away with her rendition of I Dreamed a Dream, and received a standing ovation.

Boyle turned into a star overnight – and the rest is history. She became an icon, embodying the mantra that it’s never too late to pursue your dreams. By the time her first album was released, it was clear that people felt the same.

Her first album was released in November, 2009, and it broke all sales records. It sold over 2 million copies in the first week alone, which at the time was the fastest selling debut album by a female artist in UK history.

To this day, Boyle has sold over 25 million albums and has 250 million audio streams, in addition to over 650 million YouTube hits and counting. She has released eight studio albums, received two Grammy nominations, broken 3 Guinness World Records, had No.1 albums in 40 plus countries, 128 platinum and gold album certifications and has had three or more number one albums in the UK.

Moreover, she is one of only 17 female artists in the history of the UK charts to do so, according to her website.

Susan Boyle sure is a huge star. However, her life as a professional singer hasn’t been easy. We’ll admit that money can make things easier, and it’s reported that Boyle has a net worth of $40 million, according to Celebrity Net Worth. But there are some things in life money simply can’t change things.

The truth is that Susan’s been through a lot, and that involves many sad things surrounding her friends and family.

Firstly, Susan was diagnosed with Type 2 diabetes as her career was on its way up. Doctors told her that the health concern could threaten her ability to perform live, according to an article in the Daily Express.

The Scottish singer, who still lives in her childhood home, has been living a healthier lifestyle, free of sugar, ever since she received the worrying diagnosis. She wanted to give her body the best possible chance in battling the condition, and so made a marked change.

By 2013, she had lost two stone after being told by doctors to lose weight for for the good of her health. She is reportedly now managing her condition by taking tablets daily.

Susan lost her father in 1999, and her sister Kathleen in 2000. Her mother later passed away as well – and in 2015 Boyle was struck by another tragedy. Her older sister, Brigid McCaw. passed away following being diagnosed with cancer, and it was a hard blow.

Boyle decided to take a break from her singing career, putting her new album on hold in order to take care of her family business, as well as give herself the time grieve.

“She was honest and helped me throughout my life and during my career,” Boyle later said.

“She wasn’t afraid to tell me I was getting too big for my boots. I miss her every day and we as a family have needed this quiet time to grieve in peace.”

When her elder sister Brigid passed away, Boyle had just dealt with another sad family event.

When Susan became famous, she also got a fair bit of money from her astounding album sales. However, she’s never been the type of person who likes to spend it all on herself. Instead, she shared it with her family members.

Boyle employed several of her family members to help her look after her affairs. Sadly, for for her brother Gerry, a piece allegedly wasn’t enough.

Boyle had given him nearly half a million pounds. However, other family members claim she was pushed to give him a further £50,000 ($70,000) by threatening to take his own life, according to the Mirror.

The allegations divided the family. Gerry was outraged when Susan refused to cut ties with those behind the rumours, and further horrified that anyone had suggested that he’d blackmailed his own sister.

“I knew our lives would be a roller coaster after Britain’s Got Talent but I didn’t expect our family to be ripped apart,” Gerry told the Mirror.

Susan and Gerry didn’t speak for two years following the family feud, according to the Mirror.

“Susan has been very generous to us all but I haven’t been greedy,” Gerry said. “I felt she could have done more to defend me.”

By 2016, Susan Boyle had had enough. She had a meltdown at Heathrow Airport and sent a distressing voicemail to her brother Gerry. He called her back, and soon the two reunited.

“Within five minutes, it was like we’d never been apart,” Gerry later said. “It has been great to pick up the pieces.”

It’s been almost 12 years since Susan Boyle came out of nowhere and shocked an entire world with her wonderful audition at Britain’s Got Talent. Now, she’s doing great, and recently got her first shot of the COVID-19 vaccine.

She’s made up with her brother and her life is amazing.

“I don’t dream the dream any more,” she says, “Because I am living it.”

Susan Boyle is a huge inspiration for us all. She’s the living proof that it’s never too late to pursue your dreams. We wish her all the best in the future!