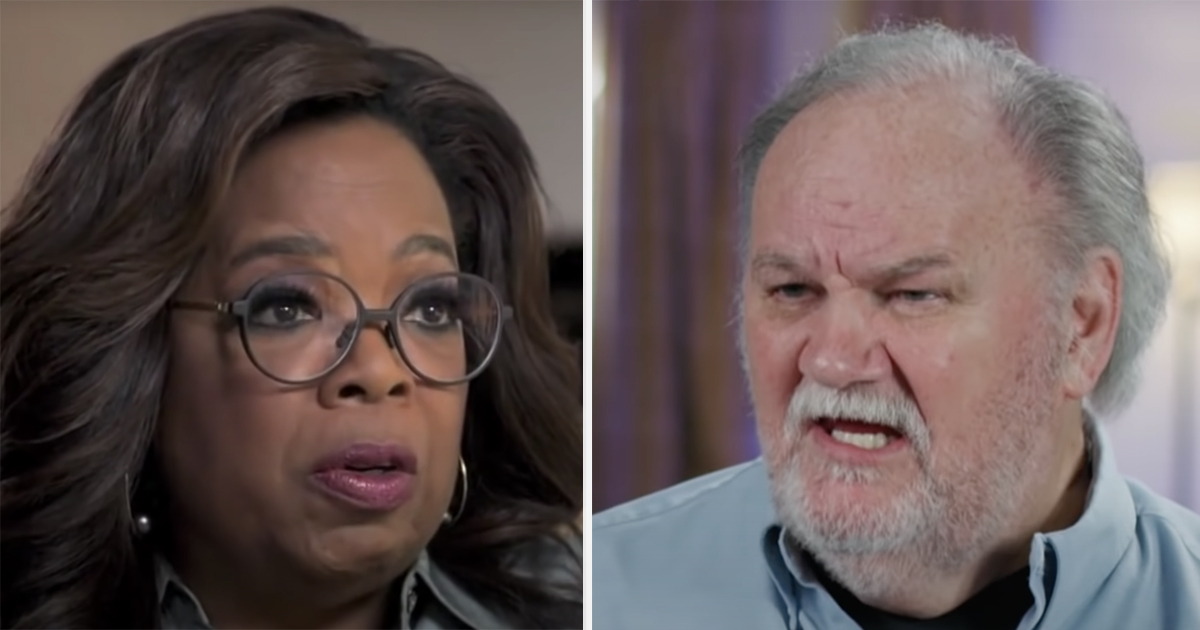 Thomas Markle’s relationship with his daughter Meghan has been rather chilly over the past number of years. The two haven’t spoken for three years, and at the time of writing, it doesn’t seem like things are going to change anytime soon.

Recently, Thomas Markle spoke out in a brand new interview with 60 Minutes Australia. Besides discussing the relationship with his daughter, Thomas also slammed Oprah Winfrey for the now infamous interview she conducted with Harry & Meghan.

Not only did Meghan’s father think it was a bad idea, he claims Oprah only did the interview to exploit the couple.

Relationships with parents can be tough; we all know this. However, for Meghan Markle, tough has been taken to a whole different level.

Meghan, who throughout her life has had a wonderful relationship with her father Thomas, no longer speaks to him at all.

She hadn’t spoken openly about her relationship with him since the royal wedding. But that changed during her and Harry’s primetime interview with Oprah Winfrey.

Meghan – who was wearing a very special bracelet during the interview – said that her father had “betrayed” her as he had spoken to the tabloid press.

Before Harry and Meghan’s wedding, the Daily Mail revealed that Thomas had coordinated with a paparazzi photographer to stage several photos. It included him getting fitted for a suit prior to the wedding, him reading a book about Britain, and him looking at pictures of Meghan and Harry.

Thomas then initially lied to Meghan and Harry, saying that he wasn’t involved in the staging of the photos. Because of the event, he was too embarrassed to attend the wedding, and also suffered subsequent heart troubles. As a result, he missed his own daughter’s wedding.

“She let me down”

“If were going to use the word betrayal, it’s because when I asked him, when the comms team told us this the story was coming out, we called my dad and I asked him and he said, ‘No, absolutely not,’” Meghan told Oprah in their CBS interview.

“When I said we won’t be able to protect our own kids one day and I said: ‘So I just need you to tell me and if you tell me the truth, we can help.’”

“He wasn’t able to do that,” she added. “And that for me has really resonated, especially now as a mother. I look at Archie, I think about this child, and I genuinely can’t imagine doing anything to intentionally cause pain to my child.”

Following Meghan and Harry’s revealing interview with Oprah, her father Thomas decided to speak out. Appearing on the television show Good Morning Britain, he said that he’d continue speaking to the press every 30 days until his daughter and Harry resumed contact.

“I feel she let me down, I was in a hospital bed the last time we talked, and I never heard from them again; they didn’t care if I died,” Thomas said. “When they say that I’m taking advantage of the press, well, basically what I do because I haven’t heard from them is I’ll do a story for the press.”

“If I haven’t heard from them in 30 days, I’ll do another story for the press,” he added.

Meghan and Harry’s interview took place in Oprah Winfrey’s mansion in Montecito, California. Harry and Meghan have bought themselves a $11 million home not far from Oprah’s, but Meghan hasn’t been the only one close to Oprah’s house, as the Sun revealed.

Pictures taken outside Oprah’s gates showed Thomas Markle handing a note to a security guard. According to The Sun, the letter was not addressed to his daughter. It was for Oprah, detailing how he wanted his own interview.

“Thomas delivered a letter to Oprah asking her to contact him so he could tell his side of the story,” a source told The Sun. “This was not a note to Meghan and Harry, it was meant for Oprah.

“Thomas watched the interview she did with them and feels he deserves a chance to have his say.”

For her part, Oprah remained fairly quiet following her sit down with Harry and Meghan. In April however, she decided to talk about the discussion she had with the couple.

Speaking on Nancy O’Dell’s new TalkShopLive streaming show, Oprah stated that she didn’t know Meghan would be so up front, especially concerning the problems she experienced within the Royal Family.

Further, Oprah revealed that she was very surprised by Meghan’s shocking claim about one – unnamed – member of the Royal Family having expressed concerns over the skin color of Archie before his birth.

“That conversation…I am never going to share,” Harry said during the interview, speaking of the claim about concerns over Archie’s skin color.

“But at the time it was awkward, I was a bit shocked. I am not comfortable with sharing [the question]. But that was right at the beginning, ‘what would the kids look like?’”

“The reason why it was such a powerful interview was when you have somebody else who is willing to be as open, as vulnerable, as truthful as they were.”

Needless to say, the interview with Oprah changed things for Harry and Meghan. Even Oprah herself could never have imagined how big of a deal it really was.

“I had no idea that it would have the reverberating impact that it has had and continues to have. I did a lot of preparation for that,” she said.

“It was really important to me that what we put out there in the world was put out into the world at the time that everybody could see it and that things didn’t leak and things weren’t misconstrued before the actual interview happened.

“I remember when we finished doing the interview, and that interview was 3 hours and 20 minutes I think, I stood up and said to the crew, ‘We all know what was said here and how important it is to have a trust to the people who just shared that so I’m hoping you all will not go out into the world and share what has happened here.’ And nobody did,” Oprah added.

The Oprah interview put the Royal Family into quite a crisis. Both Prince Charles and Prince William were said to have been outraged by the couple’s claims. Still to this day, the relationship between them and Harry is said to be rather frosty.

Speaking of frosty, the relationship between Meghan and her father hasn’t gotten any better, either.

Two weeks ago, Harry and Meghan announced the birth of their second child, daughter Lilibet Diana. The Queen was said to have seen her latest great-grandchild through a video link. And all members of the Royal Family sent their congratulations to the couple.

But one person that didn’t even know that Meghan had given birth to Lilibet was her father, Thomas.

Speaking in a brand new interview with 60 Minutes Australia, Thomas revealed that he hadn’t been informed about his granddaughter arrival.

“No phone calls, I just heard it on the radio,” he said. “I’ll be very disappointed that I don’t get to hold my granddaughter.”

In the interview, Thomas asked to be forgiven for his one ‘dumb mistake’.

“I haven’t spoken to [Meghan] since two days before they got married,” Thomas said.

Further, Thomas warned that he was prepared to air more ‘dirty laundry’ about Meghan and her relationship with Harry. As mentioned earlier, he hasn’t exactly been a paragon of confidentiality when it comes to holding back on things he know.

“You want dirty laundry? This is the first time I’ve discussed these things,” Thomas Markle said in the promo for the interview.

Even though Thomas reportedly visited Oprah to try and land his own interview, he doesn’t seem to be to impressed by her interview with Harry and Meghan.

Markle argued that Oprah took advantage of both Harry and Meghan, claiming that her ratings had gone up following the interview. He also claims that she pushed Harry & Meghan to speak about more things that they would’ve wanted beforehand.

“Yes I do, I don’t know if I’m going to get sued for that,” Thomas replied.

“That is just my opinion, it just seems to me that she is just pushing to get more and more out of it. Apple’s stock is going up, her show is going up.”

Thomas added: “To have someone bare their soul on four or five different shows to 50, 60 million people, even Dr Phil wouldn’t do that.”

Further, Steinfort asked if he’d seen the new Apple show The Me You Can’t See, a documentary series created by Oprah and Harry.

“I think it is a set-up,” Thomas Markle said of the show.

“I think Oprah is patting herself on the back and making a lot of money on this.

“Her shows went up 25 percent so obviously there is money, a lot of it. I’m sure she gives Harry and Meghan money but I don’t think it compensates for what they are doing.

“I think Oprah Winfrey is playing Harry and Meghan.”

Harry and Meghan, meanwhile, are consumed with happiness and love following the birth of their daughter, Lilibet. But looking at the big picture, Harry’s had a very rough year.

He travelled to the UK for the funeral of his grandfather, Prince Philip, but according to sources, he returned “torn” with painful emotions from the trip, relating to the relationship – or lack of – he now has with his family.

Due to his mental state, Thomas Markle claims that Oprah has taken advantage of Harry’s situation.

“I think she is using them to build her network and build her new shows,” Markle said on 60 Minutes.

“I think she is taking advantage of a very weakened man. She is getting him to say things that you just shouldn’t be saying on television.”

What do you make of this? Do you think Thomas Markle is right or not? Give us your opinion in the comment section.