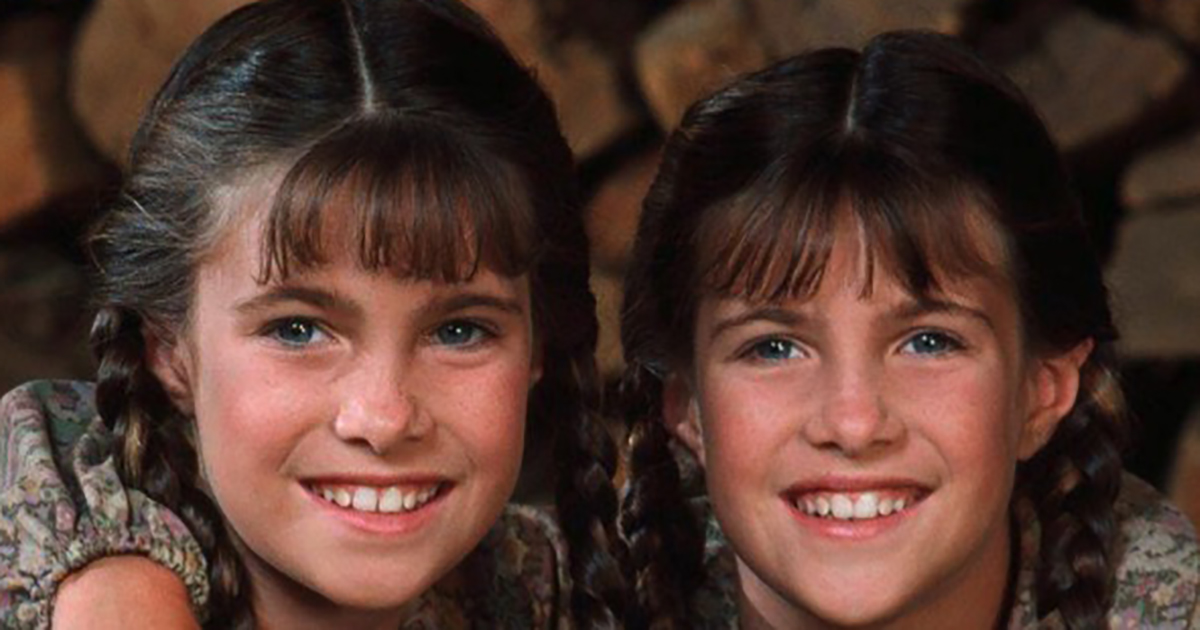 The unforgettable tv series ‘Little House on the Prairie’ is still one of my favorite shows and love watching the reruns.

Back in good old days, I used to watch it with my family every week and it taught us a lot of good Golden Rule lessons, morals and values, which sadly are lacking today.

They were some really good actors and fantastic characters in the series and the other day I came to think of one of them: Carrie Ingalls, the third daughter of the Ingalls family.

I always thought Carrie was such a cute, sweet, funny character – but did you know Carrie was played by two identical twins?

I just remember watching the opening as they’re all tumbling down that hill of wildflowers and seeing “Lindsay Sidney Greenbush” and thinking for the longest time that she/they was/were one person.

But the fact is, the twins Sidney and Lindsay Greenbush shared the role of ”Carrie” from 1974 until 1982.

Today, a lot of water has gone under the bridge and Sidney and Rachel Lindsay recently turned 51 years old. And by looking at them today, you can surely say that ”Carrie” grew into two beautiful women…

Rachel Lindsay and Sidney Robyn Greenbush was born in Los Angeles, California, on May 25, 1970. Sidney came to the world three minutes after her sister Rachel.

The girls were born with acting in their blood – their father was an American actor, usually credited as Billy ”Green” Bush and their mother was Carole Kay Bush. The girls dad, Billy Greenbush, usually portrayed sheriffs and state troopers, with an good-ol’-boy image.

He appeared in films such as ”Five Easy Pieces” (1971) and guested in one an episode of the tv hit M*A*S*H, where he played ”Cowboy”.

Billy Bush also portrayed Vernon Presley, Elvis Presley’s dad, in the 1988 TV movie ”Elvis and Me”. He could also be seen in ”Bonanza” and ”Gun Smoke” and many more westerns.

During their childhood, Lindsay and Sidney Greenbush got used to hang out on different filming locations with their dad. They grew up on a ranch in Malibu, but when they turned 7, the family moved to a condo in Malibu to be closer the ”Little House” set.

In 1973, the sisters got their first break in the television film ”Sunshine”, where they shared the role of Jill Hayden. It was a friend of their dad who thought of Rachel and Sidney when a director was looking for twins to star in ”Sunshine”.

When Michael Landon was casting for ”Little House on the Prairie”, he talked to the director of “Sunshine”, Joseph Sargent. Joseph recommended the twins for the role of Carrie Ingalls and arranged a meeting.

Michael Landon was a man who knew what he wanted and he didn’t have to think twice about signing Lindsay and Sidney. The charming girls got the role immediately, after the first casting call.

Early on, the production decided to let the twins share the role as Carrie Ingalls. It’s a pretty common solution when it comes to roles played by smaller children – the Olsen twins who became child stars on the sitcom Full House is probably the most famous example.

Wanted to see more of Carrie

Little House, which ran from 1974 to 1983, was based on Laura Ingalls Wilder’s best-selling children’s books and follows the life of the Ingalls family living in nineteenth-century American Midwest.

From the first time it aired, the series was an instant hit.

Rachel Lindsay and Sidney Robyn did what they could portraying little Carrie, the cute baby sister who was the third child of Charles and Caroline Ingalls.

Many remember the Carrie from the opening credit and theme song, which showed one of the twins running in a meadow and falling over.

“Robyn actually fell because she had her shoes on the wrong feet. But Michael Landon ended up loving it. It was a natural accident and it became so treasured,” Rachel Lindsay told People Weekly in 2001.

”I remember running down the hill & getting going to fast. I fell & then when I got up I remember my Mom was standing by the camera trying to get me to run again & I thought to myself “Nu uh, no way well just walk”. I wouldn’t do it again & Rachel wouldn’t either, so since both takes had falls in them they decided to leave it that way. Who knows maybe that was the inspiration for America’s Funniest Home Video,” Robyn said.

Carrie’s character was limited and she seemed to grow up slowly. But for many viewers, Carrie was an interesting and cute girl that many wanted to see more of. But Michael Landon wasn’t that impressed and in retrospect, the sisters revealed some interesting details:

”Michael never made it fun for us. I was always petrified I was going to make a mistake,” Rachel Lindsay said.

In September 1978, the twins were seen in together in the episode ”The Godsister”. The sisters played alongside, when Carrie creates an imaginary friend called Alyssa. Once again, the twins swapped between the characters during the episode.

”My favorite Episode was “The Godsister” because we finally got a chance to prove to Michael that we were every bit as good & talented as anyone else on the show,” Sidney Robyn later said.

The popular series, of course, opened up great opportunities for the sisters, who became familiar faces to the almost every American.

Thanks to the role of Carrie, Rachel Lindsay and Sidney Robyn could visit the White House, after writing a letter to Amy Carter, daughter of President Jimmy Carter. Amy loved “Little House” and invited took the sister on a tour at the residence and watched the lighting of the Christmas tree.

The twins were actually not the only ones from the Greenbush family to appear in the series. Lindsay and Sidney’s elder brother, Clay, can also be seen occasionally on ”Little House on the Prairie”.

Clay would later pursue a career in acting and appeared in several Hollywood productions, such as ”Superhero Movie” from 2008.

In 1982, the sisters disappeared from the series, when Michael Landon decided to take ”Little House” in another direction. Carrie’s absence was explained by the Ingalls family “moving” to Iowa, to build a new, better life.

But the twins continued to work as actors after the breakthrough as Carrie. In 1983, Lindsay guest starred in ”Matt Houston”, a crime drama series. Sidney starred in ”Hillie and Hambone”, a comedy-drama film released in 1984.

In addition to that, the girls appeared in several commercials and magazines. But they had quite a hard time getting new gigs in Hollywood.

”We auditioned for a lot of the same rolls and it cost us a lot of parts because nobody ever wanted to choose between us and hurt the other ones feelings. We were already used to that and we knew only one could get the roll,” Rachel Lindsay told Zunshine.com.

The twins have a great interest in horses and learned to ride at a very young age (they started riding horses when they were only 3 years old).

Together they therefore bought a 28-acre ranch in Malibu.

Lindsay moved to New Mexico in 1993 and began working at a ski-resort in Taos Ski Valley. There she met a construction worker with whom she had a short-term relationship.

Together they had a daughter, Katlynn. Today, neither Lindsay nor the daughter have any contact with the father.

The latest information indicates that Lindsay lives in California with her husband, Daniel Sanchez. The couple actually met for the first time on the set of Little House, at Big Sky Ranch in Simi Valley.

Daniel lived near the filming locations and was allowed by Michael Landon to visit the filming location. At the time, Daniel was just a young teenager and Lindsay a little girl. But their paths crossed decades later and they married in 2004 – at the same place they first met, at Big Sky Ranch.

In recent years, Lindsay has worked as an equine iridologist and in property management. She has also trained horses.

According to her, she still watches old episodes “Little House”, when reruns are shown on television.

”Yes I still watch them. I still see things I wish a could change and scenes I wish I could do over because I know I could do them better now,” she told the fan page Zunshine.com.

After graduating from Santa Monica High School, Sidney moved on to Pierce College and earned an associate’s degree in animal science. She changed the spelling of her name from Robin to Robyn in High school, to make it look more feminine.

The horse-loving Sidney later pursued an career in pro-rodeo and became a member of the Women’s Professional Rodeo Association.

”As far as my life now, I work full time, I just started back to college to try to get my Master’s & I breed, train, show, & sell American Quarter Horses. I am trying to build a bigger breeding program and in the future I hope to start doing Embryo Transfers,” she said in 2003.

Sidney was married to the horse breeder and veterinarian William ”Rocky” Foster for nine years. The couple worked closely together at their ranch Visalia California, to train and breed horses. Together, they lived a pretty quiet and private life.

But tragically, the marriage was overshadowed by a sad event as their union ended horribly. After being married for nine years, Sidney filed for divorce.

Two days after the divorce filing, Rocky said to Sidney that he was going to take his own life, according to Star magazine.

Sidneys husband ended his life on May 5, 2009. William ”Rocky” Foster shot himself two days after Sidney wanted to break up their marriage, according to reports.

They were pretty girls then and still looking amazing at 50!

Thank you for all the memories.