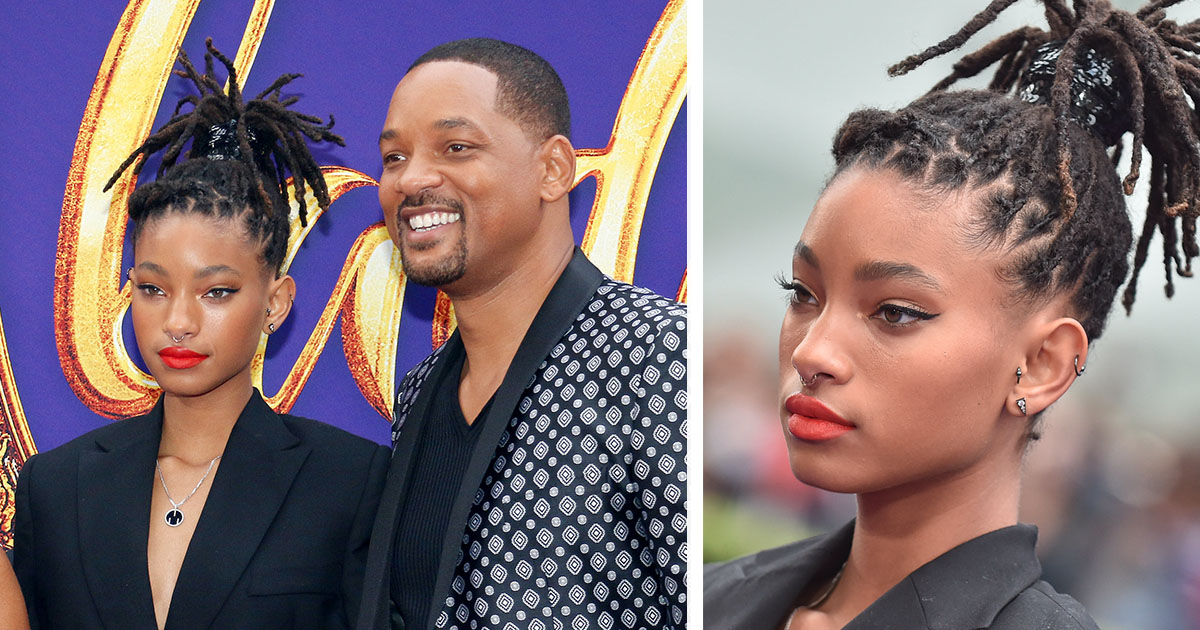 Being the child of a celebrity sure can have its perks, like having a bigger range of careers you actually can pursue — and of course, having money as well. But for Willow Smith, the daughter of Will and Jada Pinkett-Smitt, things were actually pretty hard.

Willow Smith had great opportunities because of her upbringing, and she made the most of everything. But she always chose her own path, and now, she’s an established musician and fashion figure as well as social rights advocate.

So how did she get to where she is today? This is all you need to know about her – and the secret she decided to share with the world just months ago.

Willow Smith was born on October 31 in Los Angeles, California. When she grew up, both of her parents were already huge celebrities.

Will Smith had already starred in several big Hollywood productions. And at the same time, mother Jade Pinkett-Smith was the lead singer of heavy metal band Wicked Wisdom. Will Smith also made music, releasing four studio albums, with hits such as Men in Black and Gettin’ Jiggy wit it.

Growing up, Willow Smith hung out around her parent’s workplace all the time — and that often meant the studio.

While growing up, Willow also got to join her mother on tour as she performed with Wicked Wisdom, and that meant a lot later in life.

“My mom was my inspiration as a child,” she told W Magazine, “I went on tour with her when she performed at Ozzfest with her band, Wicked Wisdom. Seeing a Black woman on stage singing rock was so amazing – but a lot of people weren’t happy seeing a Black woman in that space.

“She handled it with such grace. She was like ‘Some people are upset, but we don’t focus on that. We focus on doing our best and being strong and doing what we want to do’.”

At age 7, Willow had, just like her older brother’s Jaden and Trey, taken her first steps into the entertainment business. She got a small role alongside her father in the 2007 film I Am Legend, and the year after, she had roles in Kit Kittredge: An Americal Girl as well as Madagascar 2.

In 2010, her brother Jaden Smith starred in Karate Kid. She and her family visited the set in China supporting him, but to keep her mind on other things, Willow sang.

She had already started dancing, but at the Karate Kid set, she recorded a song. This was a moment that would define her future career.

“I brought it to my parents, I remember being so excited going, ‘Guys, I really think this is what I wanna do. I really think I want to sing.’ And the first thing that they said to me was, ‘Are you sure?,'” she recalled.

“And I was like, ‘Yeah. I’m sure.’ And they said, ‘Okay, we just want to make sure because it’s going to be a lot of work. We just want you to know that you’re really young. And most of the people who do this are much older than you, and you have to handle a lot more pressure.'”

She added, “They told me right off the bat. I was so young that I just didn’t really believe them. And lo and behold, I got to a place where it was just too much. I just needed to take a step back and figure out what I wanted to do.”

Growing up surrounded by two celebrity parents seams easy, right? You can do pretty much anything you want, and no matter what, people will hire you because of your parents? Well, it’s not at all like that, at least not for everyone.

“I wanted to do right by my parents”

Willow told BBC, as per People, that she really admired her parents growing up. She could always come to them for advice. But at the same time. she felt a lot of pressure to live up to her parents’ success regarding her own career.

“I always just wanted to do right by my parents, and do right by the beauty that they have put in the world, and continue to uplift that beauty and to uphold that beauty. And I felt a lot of pressure. And, because I’m not a minor anymore,” she said.

“I’m finding the freedom to, I can put that beauty in the world. I can uphold that energy. And so I’m just figuring that out in all of these different ways, and it’s going to be a journey, and there’s more to come.”

While she felt pressure to succeed, she really loved seeing her parents’ work and how they truly worked for it.

“All I saw was my parents trying to be the best people they could be, and people coming to them for wisdom, coming to them for guidance, and them not putting themselves on a pedestal, but literally being face-to-face with these people and saying, ‘I’m no better than you, but the fact that you’re coming to me to reach some sort of enlightenment or to shine a light on something, that makes me feel love and gratitude for you,'” she said.

Willow Smith followed her passion – and she headed straight for the music business. In 2010, her pop single Whip My Hair became an internet sensation, reaching No. 11 on the US Billboard Hot 100 and No. 2 on the UK Singles Chart.

Instantly, Willow started touring and people loved the show. However, it eventually became too much for the then 10-year-old girl to handle, especially the responsibility that comes with it.

“When you have to work and a lot of people’s incomes are on the line if you don’t perform well, that’s not conducive with childhood,” she told The Face.

“I definitely felt like I was being valued more for what I could do, than who I am inside – even by people who said that they cared about me.

“That makes you feel like, ​‘Damn, I’m not enough. I need to do something to earn your love, your acceptance and your attention.’ That just kind of made me suspicious of everybody.”

Initially, she had committed to doing a 30-day tour to promote her new music. However, after only a few performances, she wanted to go home.

Her father Will Smith stepped in, trying to convince her to continue. But instead, Willow decided to cancel the tour and shaved her head, in what Will Smith saw as a protest.

“She introduced me to feelings”

“This little girl is rejecting what I’m trying to do for her. She doesn’t want it,” he said on Red Table Talk, a podcast hosted by Jada Pinkett-Smith, Willow, and Jada’s mother Adrienne.

While Will Smith really wanted to be there for his little girl, he understood that she was the one deciding what she wanted to do. In fact, he revealed that following the tour cancelation, Will assessed his whole parenting style.

“My desire for her was overriding her desire for her. I had a real epiphany on that, and how bad a person will hate you if you keep forcing your wishes onto their life,” Will Smith said.

“She introduced me to feelings… With Willow, I started to see how there was a higher value in talking to her about how she feels about the situation versus how to fix the situation. It became the new thought process for me.”

He added, “Kids aren’t ours. They are their own people. I just completely let go of my needs and my desires for their lives.”

In 2015, Willow Smith released her full-length debut album, Ardipithecus, which she also produced herself.

Willow Smith – this is her today

Now 20 years of age, Smith has already spent half her life in the music industry. She just released her 4th solo album, lately I feel EVERYTHING, which brings her back to her mother’s punk-pop roots.

The Covid-19 pandemic has been hard on all of us. Willow used it to “heal” with a new lifestyle. She starts every morning meditating as well as reading journals from a workbook called The Artist’s Way.

This helped her a lot, Willow said, especially regarding the fact that she is a lot less stressed out. Now, she’s come to peace with herself.

“Over the pandemic, there’s just been so much healing, and I’m starting to see a lot of trauma that was always there, but for some reason, I just didn’t know it was there,” she told Who What Where.

“I’ve been doing this for about two or three months now, and the amount of clarity that I enter my day with compared to when I would wake up and immediately look at my phone is unprecedented.”

Earlier this year, Willow Smith also decided to share her sexual secret to the world. In a very brave statement on her, her mother’s and grandmother’s podcast. Willow came out as bisexual as well as polyamorous.

Basically, it is where those involved agree that it’s fine for everyone to be open to, or have more than, one romantic partner

Willow Smith opens up about being polyamorous

On the podcast, Willow Smith said that she couldn’t see herself wanting to “go past two partners”.

“With polyamory, I feel like the main foundation is the freedom to be able to create a relationship style that works for you and not just stepping into monogamy because that’s what everyone around you says is the right thing to do,” she said.

“Also, doing research into polyamory,” she added, “the main [reason] …why divorces happen is infidelity.”

Further, Smith’s grandmother Adrienne Banfield-Norrison said that it felt like it’s “really all just about sex.” However, Willow denied that’s the case.

“In my friend group, I’m the only polyamorous person. And I have the least sex out of all of my friends,” she said.

“I was introduced to [polyamory] in a nonsexual way,” Willow added. “Let’s say you haven’t always been the kind of person that wanted to have sex all the time but your partner is. Are you going to be the person that says, ‘just because I don’t have these needs you can’t have them either?'”

Willow Smith is only 20 years of age. However, we are so proud of her of speaking out on these kind of things which can be very tough, especially for the younger generation.

Sure, you don’t have to agree. But we should all praise her for her courage and bravery.