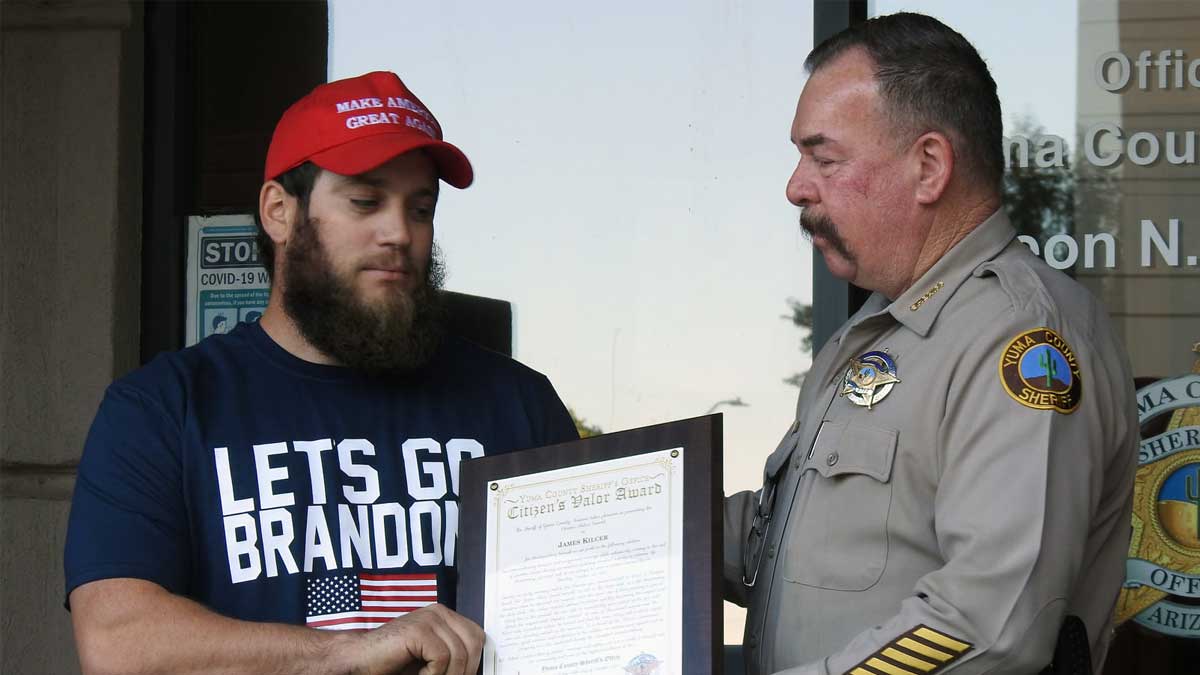 The U.S. Marine Corps veteran caught on camera disarming an attempted robber at an Arizona convenience store has been recognized for his “extraordinary heroism and exceptional courage.”

Marine James Kilcer was at a Chevron gas station in Yuma, Arizona when he got caught up in an attempted robbery last week after three people walked in with hoods and covered faces and one pulled out a handgun.

Security footage shows when the gun was pointed at Kilcer, he immediately grabs the firearm, prompting two of the men to flee the scene while he grabbed hold of the third man’s gun and him until police arrived.

When asked how he was able to take control of the situation, Kilcer said: “The Marine Corps taught me not to [mess] around.”

James Kilcer was presented with the Citizen’s Valor Award on Tuesday following the Oct. 20 incident.

Sheriff Leon Wilmot gave Kilcer the award – which his office describes as the “highest award for citizens whose actions warrant recognition” – for Kilcer’s “extraordinary heroism and exceptional courage while voluntarily coming to the aid of another citizen during an incident involving criminal activity at extreme, life threatening, personal risk in an attempt to save or protect human life.”

The marine was wearing a “Let’s go Brandon” T-shirt when he accepted his award, a slogan which has caught on following a profane anti-Biden chant expressed as college football games which was then misheard by an NBC reporter as “Let’s go Brandon.”

The slogan immediately took off on social media among some Trump supporters. Kilcer was also wearing a red MAGA cap while accepting the award.

The suspect Kilcer detained was a juvenile and was booked into the Yuma County Juvenile Justice Center for one count of armed robbery and one count of aggravated assault, as per CBS News.

Two days later, officers arrested another juvenile involved in the case. No injuries reported from any of the victims. This case remains under investigation.

This man does deserve recognition for risking his life to save others.

Help us to pay tribute to his bravery by sharing this story.