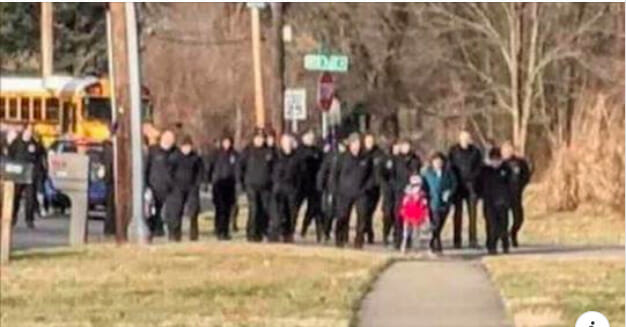 Here’s a story that demonstrates what true solidarity is all about.

For two decades, Sheriff Deputy William (Bill) Brewer served with the Clermont County police department in Ohio. He was well-known amongst his peers as a man of great integrity and a dedicated detective who never fell short of his duties to serve and protect the public.

But he was also well known to be a loving husband and father.

Sadly, Bill’s duties to both his family and community came to untimely end after a 911 call changed the course of his life — and that of his family’s — forever.

On February 2, Bill Brewer and several of his peers responded to a 911 call in nearby Pierce Township, Ohio, according to WKRC-TV.

The routine call would end up with the officer being killed in the line of duty, leaving behind his wife and young son in the cross fire.

A local resident, Wade Winn, had dialled 911 claiming that someone was trying to break into his apartment. According to Wade, this individual was carrying an assault rifle and a Glock.

Strangely, however, Wade also claimed that the alleged home invader was coming in “through the walls”. The caller’s father would later advise the police that his son had been using LSD.

The situation took a tragic turn as police arrived on scene. A standoff ensued, with Wade opening fire on the officers. The shootout ended with another officer, Lt. Nick DeRose being wounded — and Detective William Brewer’s untimely death.

“This would be the guy I would want to show up if my family members were in need,” Sheriff Robert Leahy later said at a ceremony held in Detective Bewer’s honor, according to WVXU.

“I’m a mess. I’m a wreck. I’m devastated, but just like all of you, how can I not be when I know that Bill’s family is not okay?”

Detective Brewer was known across his community as an athletic hometown boy and the beloved officer’s death affected the entire community.

“Twenty years, he was a good father, a good husband, a good friend, a good employee,” Sheriff Leahy told WCPO-TV. “He’s what this country needs more of.”

It’s no wonder that hundreds of vehicles joined a procession to escort Brewer body to the burial site on the day of his funeral.

But Officer Brewer’s death not only left behind a shocked community — it also left his wife and young son behind. But the police department made sure they did their best to do what they could to support them.

“(He was) proud as a peach of his son, loved his son,” Rex Parsons, Batavia Township Administrator, said. “He would come in and tell me stories about how his son was growing up when he was only five.”

On February 13, about 20 officers showed up to escort Brewer’s young son to school, according to WLWT.

Fallen Detective Brewer’s son being walked to school today. In this family, nobody fights alone! pic.twitter.com/O5XhVrq3TN

“In this family, nobody fights alone!” the police-advocacy group Ohio Going Blue wrote alongside the picture on Twitter.

What a tragic but heartwarming story. Please share to celebrate these officers’ wonderful gesture and to share your thoughts and prayers with the Brewer family.