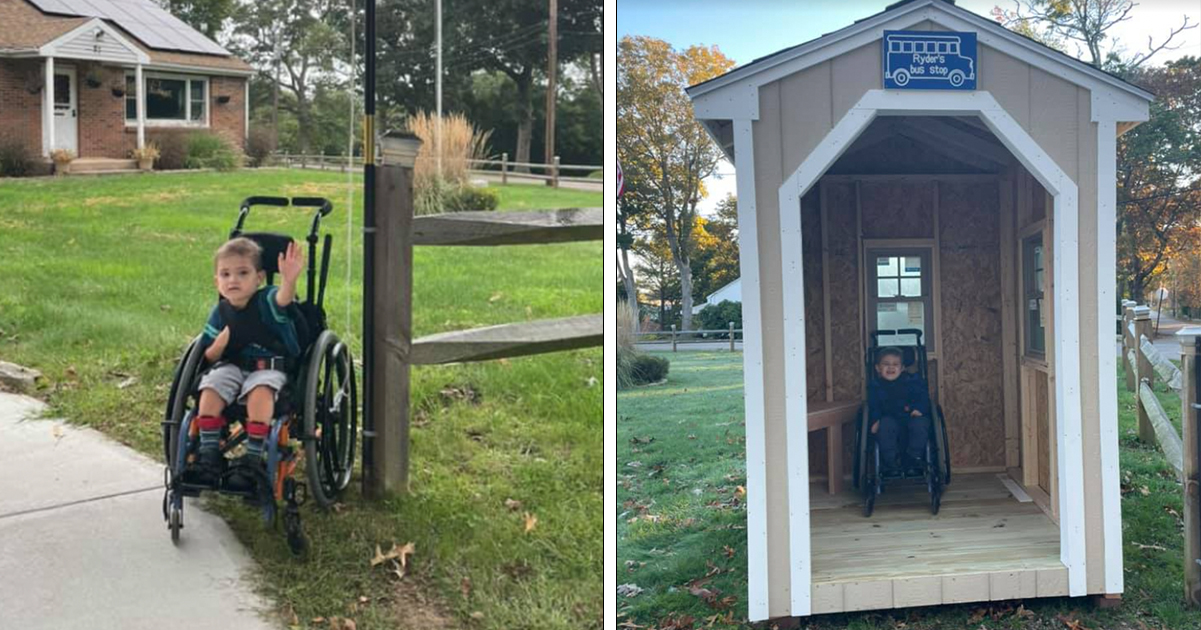 For over 20 years teacher Dan McKena has ensured his construction class work on projects that benefit his Westerly, Rhode Island, community.

So when Ryder Killam’s father posted an appeal on Facebook for a bus shelter for his 5-year-old son, Dan happily took on the challenge.

The 5-year-old boy is wheelchair bound and has to take shelter while waiting for the bus under a patio umbrella tied to a fence.

His dad Tim Killam made the shelter to help his son, who was born with spina bifida, stay somewhat protected from the harsh New England weather while waiting for the school bus.

“Our door to the bus stop is approximately 75 feet and in inclement weather, it was very difficult to rush Ryder out to the stop,” Tim told Fox News.

And when they finally make it to the bus, “it takes time for the wheelchair lift to deploy out of a school bus so we needed this to be able to shelter him as best as possible,” he added.

Tim’s Facebook appeal eventually found its way to teacher Dan who was looking for a project for his older students.

When he announced the challenge 15 students got to work.

As it was approaching winter Dan encouraged his students to work as quickly as possible to ensure Ryder didn’t have to endure too much of the cold weather.

The end result was an ADA-compliant hut with two windows and during the winter months, Ryder’s parents added a heat lamp.

It “makes loading and unloading on the bus flawless,” Tim Killam said. “The size is perfect and because it’s ADA compliant, we are able to be inside with him. Ryder can be anxious, so having one of us with him is so important.”

‘Part of the community’

When the community heard about the project for Ryder a heated blanket was donated to help keep the youngster even warmer while waiting for the bus.

Dan said the point of his class is to make sure his students are “aware of basic construction techniques.”

By incorporating these projects, “not only are they learning to use the tools and equipment, they’re also learning how to be a part of their community,” he said.

This teacher deserves all our recognition for helping his local community through his construction classes for 20 years. By doing these projects he has encouraged generations of young people to think about ways they can help those around them.

I’m so glad Ryder has a warm shelter while he waits for the bus.

Help us recognize this amazing teacher and thank him for his service to his community by sharing this story.