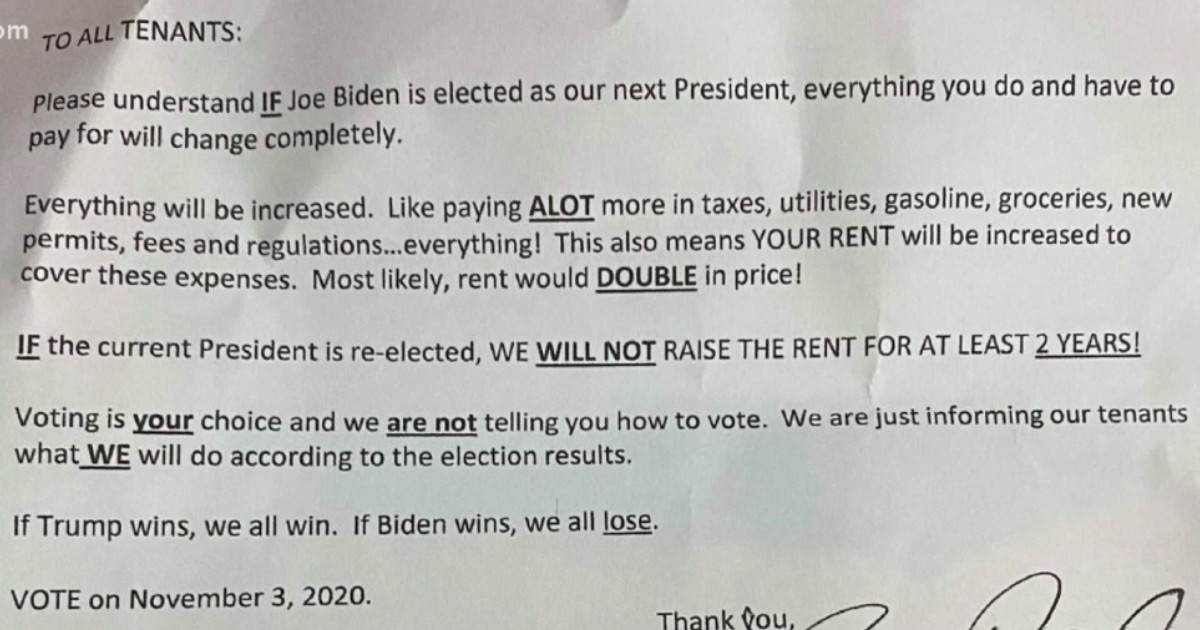 Voter intimidation is against federal law.

The law says “whoever intimidates, threatens, coerces, or attempts to intimidate, threaten, or coerce, any other person for the purpose of interfering with the right of such other person to vote or to vote as he may choose … shall be fined under this title or imprisoned not more than one year, or both.”

It is a serious crime, yet every year people push the boundaries in an attempt to get others to vote for the candidate they favor.

And this year is no different.

Recently, tenants of a trailer park in Fort Morgan, Colorado received a questionable letter from their landlord.

Please understand IF Joe Biden is elected as our next President, everything you do and have to pay for will change completely.

Everything will be increased. Like paying ALOT (sic) more in taxes, utilities, gasoline, groceries, new permits, fees and regulations…everything! This also means YOUR RENT will be increased to cover these expenses. Most likely, rent would DOUBLE in price!

IF the current President is re-elected, WE WILL NOT RAISE THE RENT FOR AT LEAST 2 YEARS!

Voting is your choice and we are not telling you how to vote. We are just informing our tenants what WE will do according to the election results.

According to Joe Biden’s tax policy, taxes wouldn’t be raised on those making less than $400,000. Only the wealthy and corporations would see an increase.

Current tenants are concerned, mainly because they can’t control how other Americans vote in the election.

“We can’t control what everyone else does, you know? We can’t control the results,” Cindy Marquez, who has lived with her family at the trailer park for 20 years, told 9News.

“It was mainly hurtful, you know? How could someone say something like that or basically threaten us according to something that we can’t control?”

The Colorado Secretary of State’s office was informed about the letter and the residents’ concern about possible voter suppression. The letter had been passed on to the Attorney General.

What do you think about this letter? Does it qualify as voter intimidation or something else?