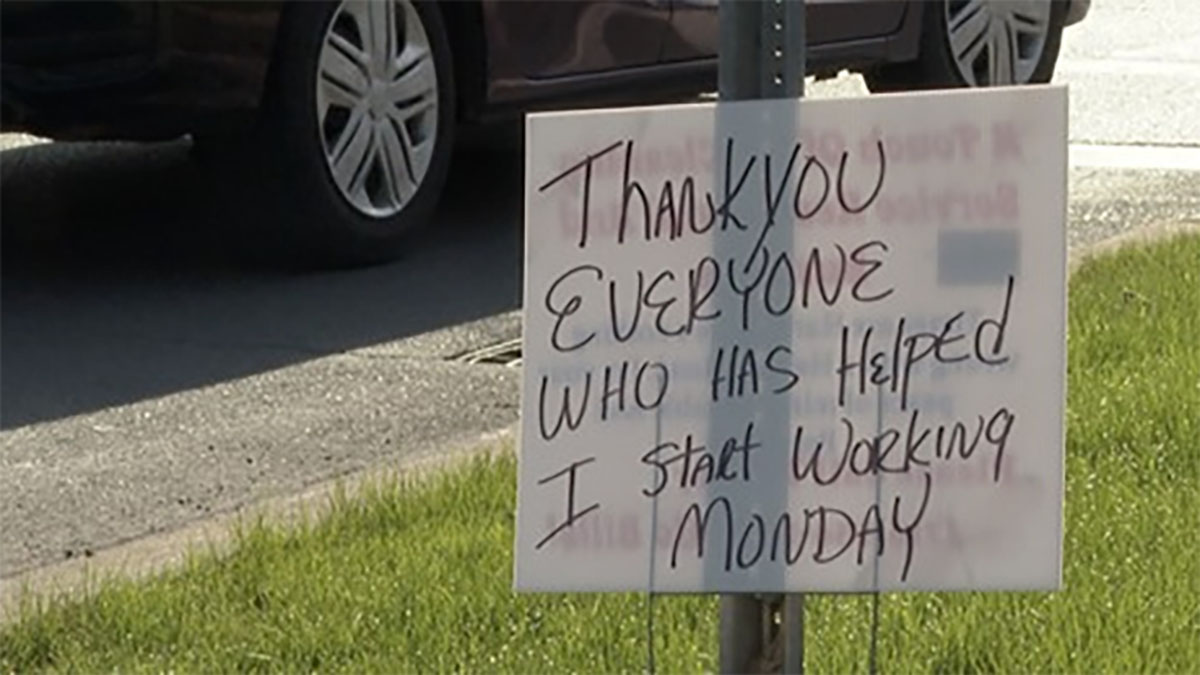 It’s easy to drive past those people standing by the side of the road holding a sign, ignoring their daily plight.

Many of us presume they’re scammers and don’t really need our help, while others think they’ll put our donation to bad use.

But one man decided to prove his need for help was genuine by leaving a sign thanking those who had helped him over the past few months.

The man from West Seneca, New York, had become a regular fixture on one street corner where every day he had held a sign up saying he was ex-military, drug-free, alcohol-free and looking for a job, according to local Jesse Dixon.

To those who helped him with food and cash he was known only as Kevin. Jesse, who often stopped to help Kevin, said he was polite and seemed as though he was just experiencing a bad patch in his life.

“He’s just a nice guy,” Dixon told WKBW-TV. “It seemed like he, you know, hit a patch of, you know, patch of bad luck, so we were just trying to help him through it.

“If I didn’t see him for two or three days at a time, it was unusual. Like I said, I usually … usually saw him at least a couple times a week.”

But this week instead of Kevin standing on his usual corner with his sign asking for help there was a handwritten sign saying: “Thank you everyone who has helped. I start working Monday.”

This sign meant a lot to those who had stopped to help Kevin and even got to know him over the past few months.

“I was really glad to hear that he’s found some work,” Dixon said.

“Here’s a man who is so grateful to have found a job that he left a sign for anyone who’s helped him over the last, you know, however many months,” she said. “I mean, that gives me goosebumps.”

Local news station 7 Eyewitness News posted the story on its Facebook page where many readers also expressed their happiness at Kevin’s employment news.

“Our family has helped him out on many occasions. He was always so grateful for anything we gave him. Congratulations,” one person wrote on the post which has so far received 13,000 reactions.

“So very happy!” another wrote. “I have stopped on a few occasions and given him food and gift cards. He is such a remarkable kind man. So glad to hear this news.”

“I just gave him some money last week,” wrote a third. “I’m so happy for him. I see it in his eyes he needed help and was thankful.”

According to the news station Kevin was offered a job with a landscaping company.

I’m so happy Kevin’s persistence in asking for work has finally paid off and I wish him all the success in the future.

I hope Kevin’s expression of gratitude to those who have helped him inspire others to help those less fortunate than themselves, you just never know the impact you’re making with one small act of kindness.