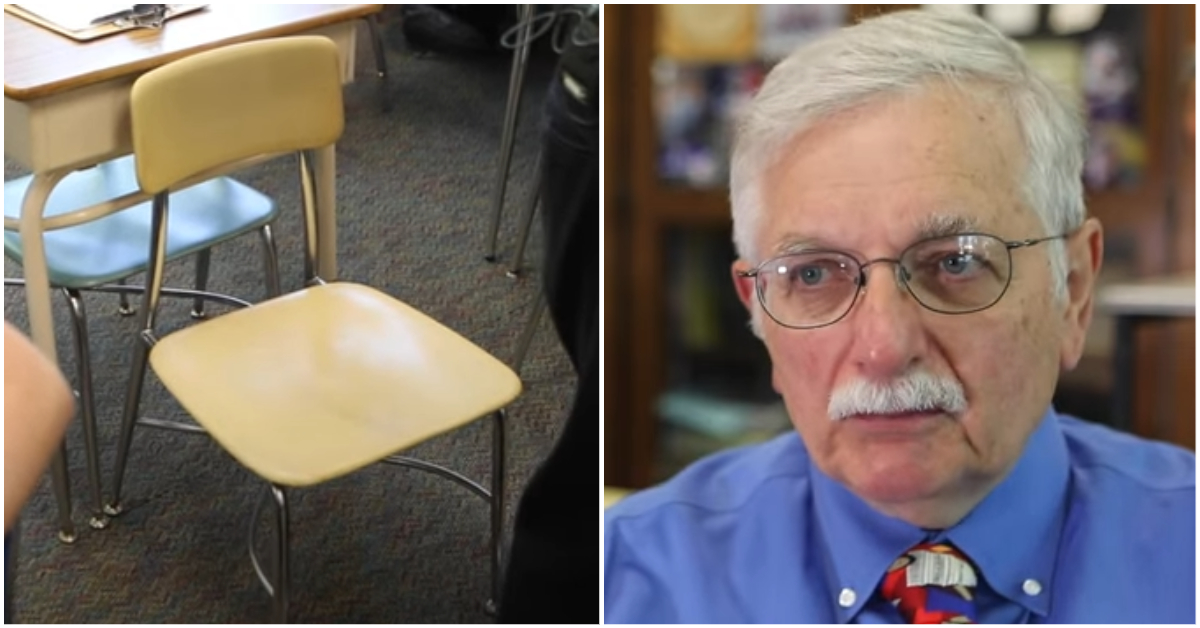 Teachers teach their students all kinds of subjects, whether its English or history or math — but it takes a very special kind to teach them about life.

But one middle school teacher has always made it his mission to teach his students something about tolerance — using nothing but an empty chair in his classroom.

Dan Gill has been a teacher for 53 years. His social studies classroom at Glenfield Middle School, in Montclair, New Jersey, has an unusual feature: it always has one empty chair, right in the middle of the room, unoccupied by any student.

But the seat is symbolic, and holds an important lesson — one that, for Gill, dates back to his childhood in the 1950s.

In 1956, when Gill was 9 years old and living in South Bronx, he was headed towards a friend’s birthday party, along with his friend Archie. But the boys’ excitement soon turned into a bitter lesson.

“We were all dressed up. Back in those days, you wore suit jacket and tie to a birthday party and we were looking forward to having a great time,” Gill told NJ.com. “And lo and behold, it turned out to be not such a great time.”

Gill still recalls the moment the birthday boy’s mother opened the door, allowing him inside… but rejecting his friend Archie.

The woman said that there weren’t “enough chairs.” But it was clear the reason she was turning the other boy away: Archie was Black.

Even as a boy, Gill saw through the woman’s “chairs” argument (he says he had been to their house and knew they had “plenty of chairs”) and knew she was being prejudicial based on the color of the boy’s skin. They were both left devastated: “We cried. The both of us.”

“I felt so bad because he had been humiliated,” Gill told the Washington Post. “We gave her the presents and I said we’re going to go to my house, where there are plenty of chairs.”

While Mr. Gill lost touch with Archie around 1960, he never forgot that day, and the impact that prejudice can have. When he became a teacher, he resolved to make his students understand, too.

“We need to be a class of opportunity,” Gill told Today. “Archie was denied the opportunity to go to the birthday party because of a bias the woman had.”

And that’s why he has always kept an empty chair in his room. It’s the chair that Archie was so cruelly denied, and a symbol of the acceptance of others that we should all strive for.

And for Mr. Gill, it’s a symbol that his classroom will always be one free of prejudice.

“I put a chair in my classroom so that anybody who comes to my classroom filled with anticipation, like a party, would feel welcome,” he told CBS News.

As a social studies teacher, Gill teaches his students subjects like the civil rights movement. But the symbolism and the personal nature of the “empty chair” make an impact that no textbook ever could.

“Kids work well with symbols,” Gill told Today “It’s a reminder that they can do better — better academically, socially, and emotionally — but also to make people feel welcome and make this a better place to live.”

Thanks to this important lesson, Gill has made a big impact on generations of students, his fellow faculty members say.

“The passion he has is extraordinary,” teaching assistant Tiffany Kiley told NJ.com. “Every day is like his first day. He leaves his mark on these children day after day. I work next to him, and he’s teaching me, too.”

“It keeps us anchored, and so sometimes, when we get distracted and politics get in the way or you hyper-focus on something that’s not as important, Mr. Gill can always bring us back,” Principal Erika Pierce told CBS.

After 53 years on the job, Mr. Gill will retire at the end of this school year.

But even after Gill leaves the classroom, the story will live on: after retiring he plans to write a book called No More Chairs, sharing the story of Archie and the famous “empty chair” with the whole world.

What a powerful story: for over 50 years, Mr. Gill has found a way to instill lessons about racism and prejudice to his students in a really meaningful way.

We wish him the best on his upcoming retirement, and look forward to him sharing the story in his new book.