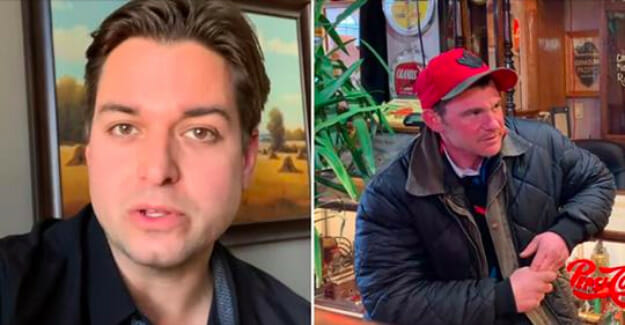 There are so many ways we can do better in our world — the choices we make every day can make the difference between causing someone pain — or joy. If everyone did the latter, the world would certainly be a much better place.

Men like Alex Archbold seem to understand this. Alex runs a unique items shop in Edmonton, Canada. When a homeless man walked in and handed him an old photo of Disney character Bambi, he had no idea what he was giving away.

But when Alex discovered the Disney art print’s true value, he made a choice — the kind that brings joy.

Alex’s vintage shop contains loads of memorabilia, interesting items and unique pieces for sale. The family-run shop prides itself on gathering some of the most curious collectibles for their diverse clientele.

They source their inventory from various places. One is a homeless man by the name of Adam, who occasionally visited Alex’s shop to offer him goods he’d collected from garbage bins around the city, in hope of making some cash.

“It’s not unusual to have people walk in my store with treasures they have for sale,” Alex told CBC. “I’ve seen him [Adam] through the store many times before, so he’s always a welcome sight.”

One day, Adam walked in with a plastic bag filled with various loot and trinkets he’d collected from a dumpster dive.

“He presented a ratty old plastic bag with a few little treasures inside that he’d found in a dumpster. And one piece that kind of stood out was a picture of Bambi, in what was in a dirty broken frame,” Alex said.

The old fashioned picture featured the iconic movie scene where Bambi is just born and meets his forest friends for the first time.

The item seemed interesting enough to Alex, so he offered the homeless man $20 CAD for it — making himself a mental note to take a better look at it later.

Alex originally assumed the photo was some kind of replica and figured he could replace the frame and charge about $100 CAD for the item. But as he removed the broken frame and flipped the image over, his jaw dropped. Behind the image was a very old certificate of authenticity — with a copyright date of 1937.

It’s at this point that Alex realized how badly he had underpaid Adam.

“So I vowed that whatever I would get, I would give [Adam] half [the money],” Alex said.

Alex put the photo up for auction on eBay, and it eventually sold for $3,700 CAD ($2,780 USD). He was now determined to find Adam and give him his well deserved piece of the profit. But tracking down a homeless man was no easy feat.

“Getting him the money was difficult because he has no home and no phone number,” Alex said. “I took it upon myself to drive around town for a period of two weeks every single morning before work to try and find him.”

Alex’s efforts finally paid off. He managed to locate Adam — and immediately handed him CAD $1,700 in cash, bringing immediate tears to the stunned homeless man’s face.

But the story doesn’t end there. It seems acts of kindness are certainly contagious and the wider community also soon mobilized to help Adam out.

Alex, as if inspired by his own initial gesture, set up a GoFundMe for Adam to help raise funds to get him a  plane ticket back home to Ontario, where he had better chances to live off the streets.

“I’m still kind of pinching myself,” Adam told CTV News. “It doesn’t seem real to me. It’s awesome to know people are out there that care and that are kind.”

This wonderful story has since been touching the hearts of thousands — and understandably so. It brought tears to my eyes as I read it.

Watch the video below for more on this wonderful turn of events.

What an amazing turn of events for Adam — Alex’s compassion and heart of gold just gave this man a second chance at life.

Share with your family and friends if this story moved you, too, and if you agree we need to make the right choices, everyday!