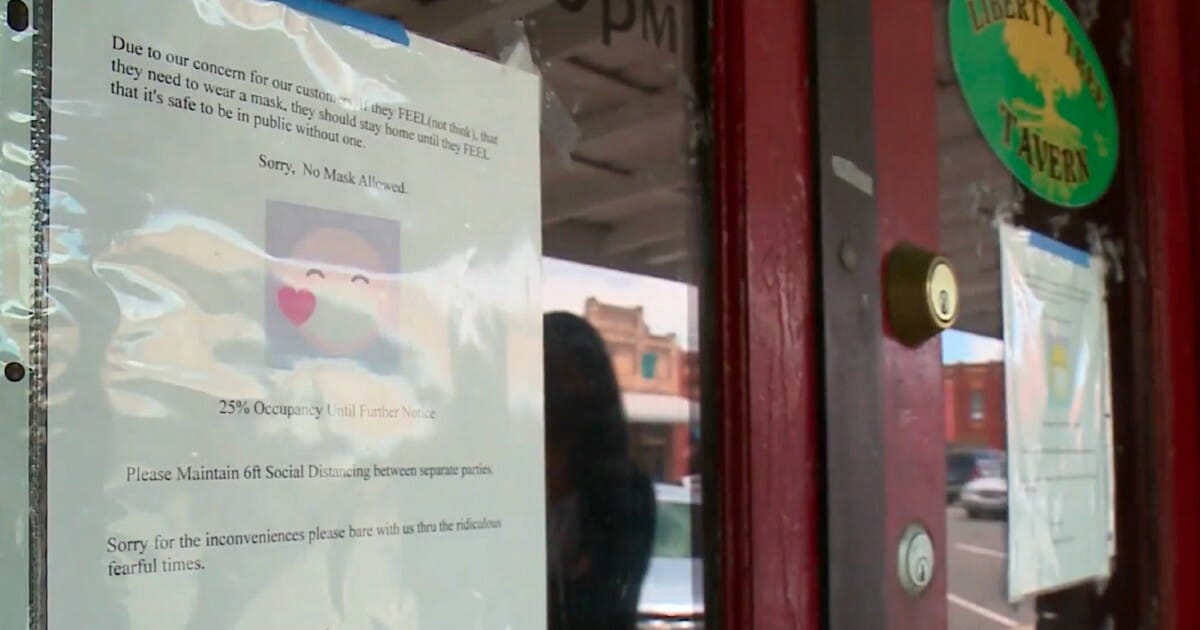 While many businesses are reopening and implementing social distancing guidelines, which include wearing face masks, despite recommendations from the CDC, one business owner in Texas has decided to ban masks altogether.

“Due to our concern for our customers, if they FEEL (not think) that they need to wear a mask, they should stay at home until they FEEL that it’s safe to be in public without one. Sorry, no masks allowed,” a sign reads outside the tavern in Elgin, Texas.

“It is more of a push back — the snitches, and the contact tracers out there,” Kevin Smith, Co-Owner of the Liberty Tree Tavern, told KXAN. “This is still a rural county.”

According to reports, the town of 10,000 people had slightly over 50 people test positive for COVID-19 and one of two people who died in the county from the illness was from Elgin.

While many may take issue with Liberty Tree Tavern’s new rule – they commented on Facebook that they would allow anyone with a mask “if they really want to wear one” and clarified it wasn’t a publicity stunt – some locals don’t have a problem with it.

“I’m a stage 4 cancer survivor. It’s just a choice. He just put that up there to let people know if they aren’t feeling good, then they maybe shouldn’t come,” Charles Chamberlain said.

Chamberlain, who is considered high risk for contracting the virus, explained that when he was quarantined for his cancer treatments he felt that he was simply existing and not living. The past few months have made him feel a similar way.

“This quarantine… that’s not living, that’s existing,” he said.

A previous order issued by Bastrop County Judge Paul Pape required residents to wear face coverings in public. According to the CDC, face coverings “may not protect the wearer, but it may keep the wearer from spreading the virus to others.”

While the CDC has issued guidelines, there is no universal rule in the United States for wearing a face covering.

Customers are asked to practice social distancing and are reminded that the business is only capable of serving 25 percent of its capacity.

What do you think? Do you agree with the business owner? Share your thoughts with us on Facebook.