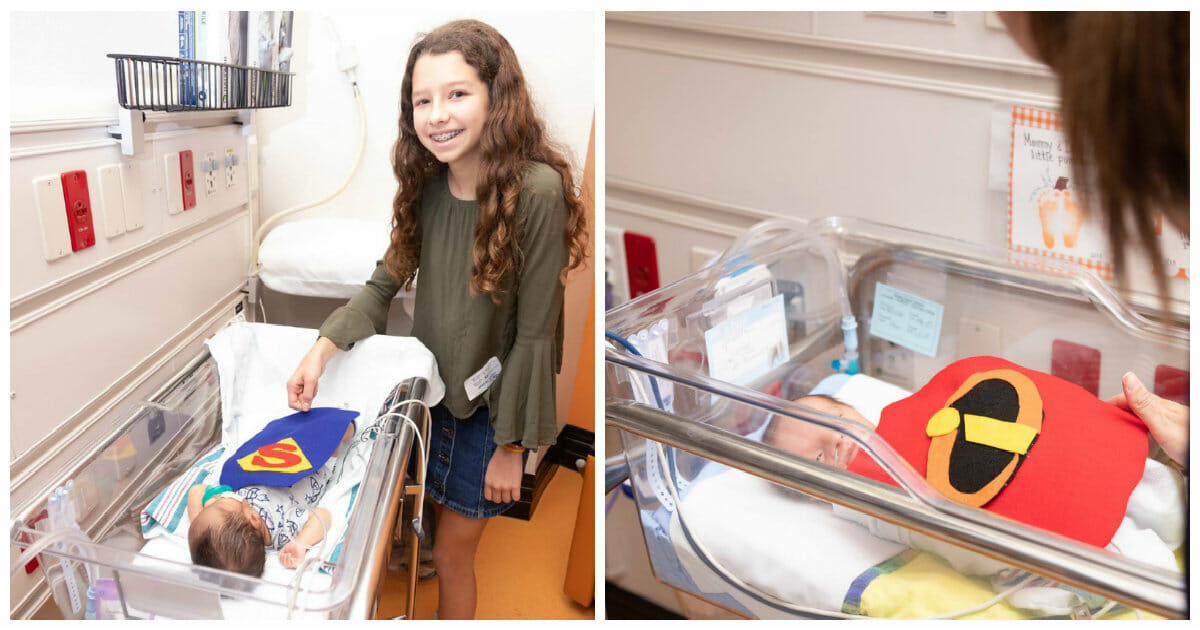 It’s Halloween, and people young and old are dressing up in their costumes. Even babies get in on the fun: while they’re obviously too little to pick out a costume for themselves, it’s an adorable photo opportunity to dress your infant up for the holiday.

But other babies aren’t so lucky. There are many parents who are spending the holiday at a hospital NICU, watching over a premature newborn.

However, last Halloween one kindhearted teen decided to make their day by crafting handmade costumes for the babies… not just for Halloween, but a symbol of their strength and power.

Last year Rachel Maretsky, a 13-year-old middle school student from Orlando, heard a story about a nurse from Kansas City who made superhero capes for her little patients. Rachel was inspired, and set out to do the same for the 117 preemies at local NICU at Winnie Palmer Hospital.

“I always loved doing crafts and then when I saw that, I thought it would be the perfect project for me to do,” she told WKMG.

Modeling off the classic costumes of Batman, Superman and Wonder Woman, Rachel made over a hundred little capes by hand, cutting and gluing them together at her kitchen table.

Rachel made enough capes for all the preemies in the hospital, and delivered them ahead of the holiday.

She told the Orlando Sentinel that the project was special to her because her best friend was born premature.

Delivering the capes, she saw the joy on all the parents’ faces as they realized their baby would have their first costume, something that would’ve been impossible without Rachel’s handmade gifts.

“It was more exciting than I thought it would be… the [parents] had a costume that would fit their babies,” Rachel told the Sentinel.

The staff at the hospital was touched by her act of kindness.

“To have this cape costume for them, it’s just really special for them to be able to celebrate the holiday here,” volunteer coordinator Stephanie Casaceli said.

“She has really taken that worry of having a costume away from those parents because she’s able to give that to the family and they’re ecstatic to see their little one in a tiny (incubator) with a costume on, it’s just so meaningful to the families.”

Dressed as Superman, these babies look like the strong fighters they really are.

“They just came into the world and they’re surviving and thriving in this little incubator with all these tubes attached to them and they’re getting used to it and surviving, which is amazing, so that means they really are superheroes,” Rachel said.

“Doing this project and meeting the babies and their families helped me see that the NICU babies really are superheroes.”

What an incredible act of kindness! Let’s thank this teen for all the hard work she did to make these families’ lives a little brighter.