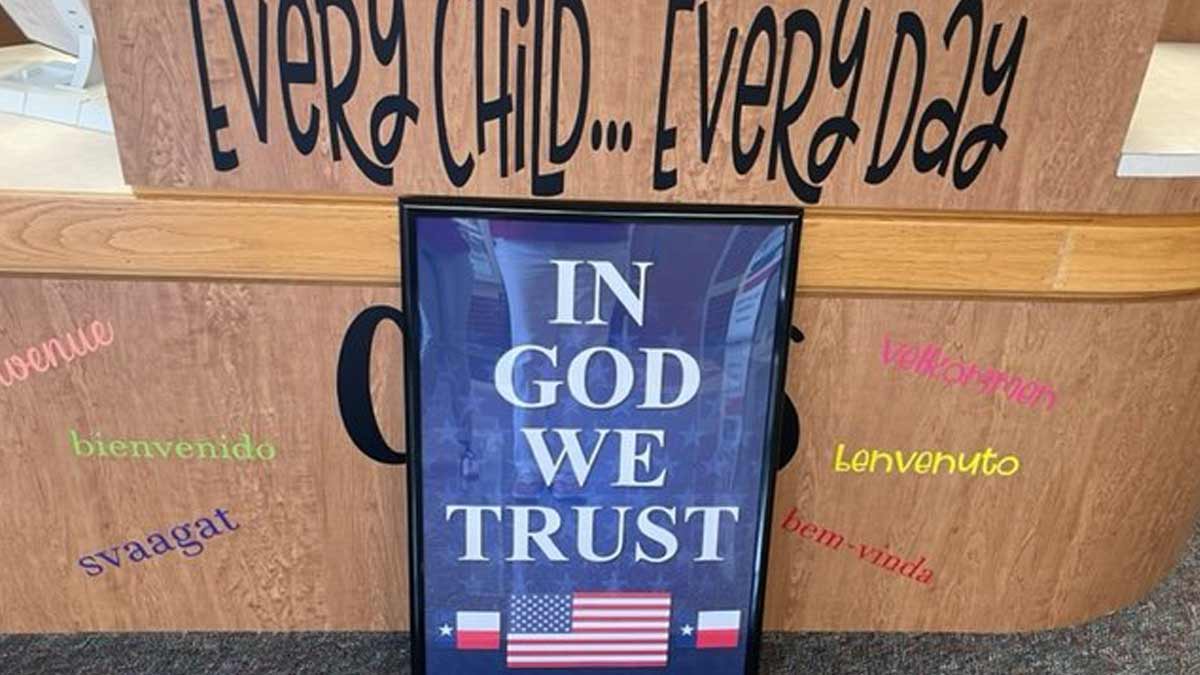 For most children in the southern most part of the United States, class is back in session. And this year some students in Texas might notice new signs greeting them as they walk into their schools.

School districts across the Lone Star State are required to display posters that nation’s motto, “In God We Trust,” if the poster was donated or purchased using private funds.

Last year Governor Greg Abbott signed a law stating that public elementary and secondary schools must “display in a conspicuous place in each building of the school or institution a durable poster or framed copy of the United States national motto” if the sign was donated or purchased using private funds and then given to the school district.

The law also states that the sign must contain a representation of the US flag and the state flag.

Although the law went into effect last year, it has only recently gained attention.

State Rep. Tom Oliverson (R), who co-authored the bill, said it was a “great opportunity” to display the nation’s motto in public schools.

But others are concerned it blurs the line between separation of church and state.

“These posters demonstrate the more casual ways a state can impose religion on the public,” Sophie Ellman-Golan of Jews for Racial & Economic Justice (JFREJ) told the Guardian.

“Alone, they’re a basic violation of the separation of church and state. But in the broader context, it’s hard not to see them as part of the larger Christian nationalist project.”

Although the signs do not explicitly mention any one religion, many say it promotes Christianity.

“We know that state governments in places like Texas are codifying white Christian nationalist patriarchy into law at an alarming rate,” Ellman-Golan said.

“The national motto asserts our collective trust in a sovereign God,” he wrote on Twitter.

An activist from Florida is currently working to raise funds to send signs to Texas schools, but rather them be in English they’d be printed in Arabic.

Texas is not the only state to allow or require schools to display “In God We Trust,” several others, most those in the south, have passed similar bills.

“In God We Trust” has been the United States’ motto since former President Dwight Eisenhower signed a law in the 1950s.

What are your thoughts on having a sign stating “In God We Trust” in public schools?