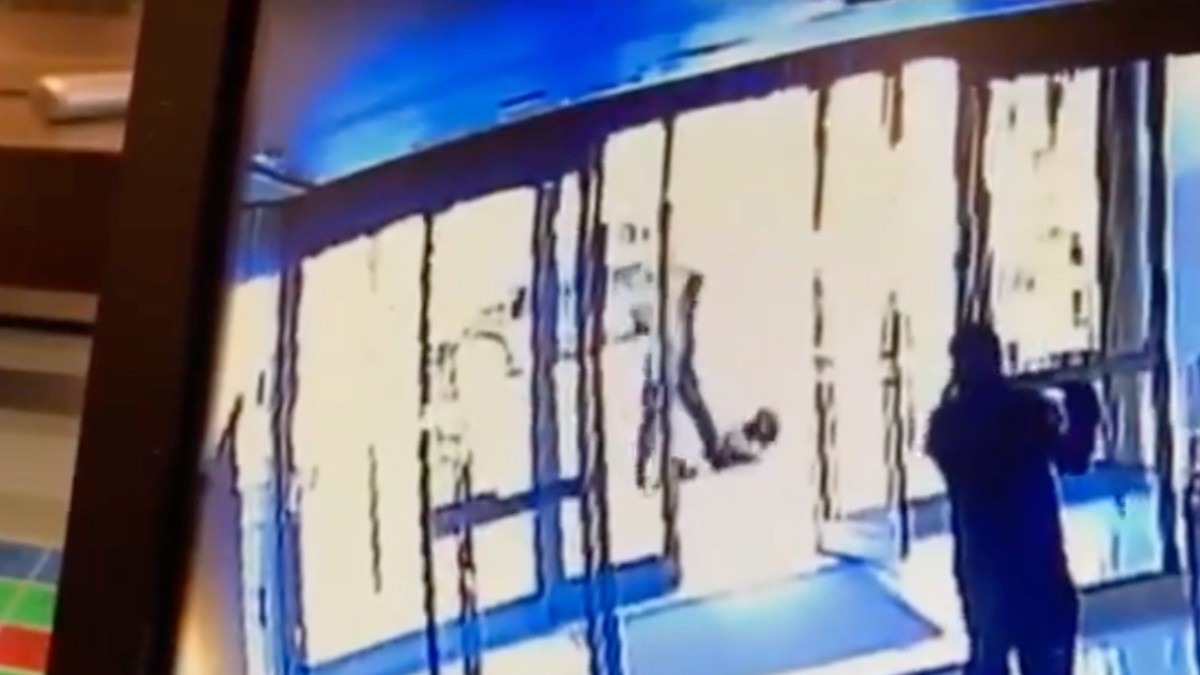 Disturbing surveillance footage shows a man walk up to a 65-year-old Asian woman kick her in the stomach and then repeatedly stomp on her in the Hell’s Kitchen neighborhood of New York City.

As the suspect, who has yet to be identified, attacked the woman at least two people watched and did not intervene.

Mayor Bill de Blasio called the witnesses’ behavior referred to the actions of the suspect as “absolutely disgusting and outrageous” and said it was “absolutely unacceptable” that no one stepped up to help.

Warning: Contents in the video may be disturbing to some.

The attack occurred around noon on Monday, a few blocks from Times Square.

A 65-year-old Asian woman was walking on the sidewalk when a man approached her and kicked her to the ground. He then continued to beat her while at least one person stopped and watched from the inside of a building.

Seconds later, two more men come into the frame and one of the men closes the door to the building while the woman struggles to stand up outside.

Meanwhile the suspect continues walking down the sidewalk.

It was reported that another man chased the suspect, but the suspect pulled out a knife.

During his daily press briefing, de Blasio commented on the video and the lack of action from the bystanders.

“If you see someone being attacked, do whatever you can,” de Blasio said. “Make noise. Call out what’s happening. Go and try and help. Immediately call for help. Call 911. This is something where we all have to be part of the solution. We can’t just stand back and watch a heinous act happening.”

According to the Associated Press, the woman was hospitalized. ABC7NY’s CeFaan Kim reported she suffered a fractured pelvis and contusion to the head.

Brodsky Organization, the property developer and manager of the building where the attack took place, said the staff members who witnessed the attack and did not intervene were suspended while an investigation was being conducted.

The NYPD has released photos of the suspect, who reportedly made anti-Asian statements as he attacked the woman.

The NYPD recently announced they would introduce new tactics, including plainclothes officers, to combat anti-Asian crime in the city.

“I’ll say this so the message is very clear to everyone: the next person you target whether it’s through speech, menacing activity, or anything else, walking along a sidewalk or a train platform, may be a plainclothes New York City police officer so think twice,” Police Commissioner Dermot Shea said.

However, it appears much more needs to be done in order to stop the hate.

The NYPD also shared another video showing an instance of anti-Asian hate that occurred on the J train at the Kosciuszko Street station.

Warning: Contents in the video may be disturbing to some.

The brutal fights ends with the Asian man unconscious.

Police are still looking for the suspect.

This has got to stop. There are absolutely no excuses for any of this. And if you happen to witness an attack, say something or call the police. Don’t just stand there!