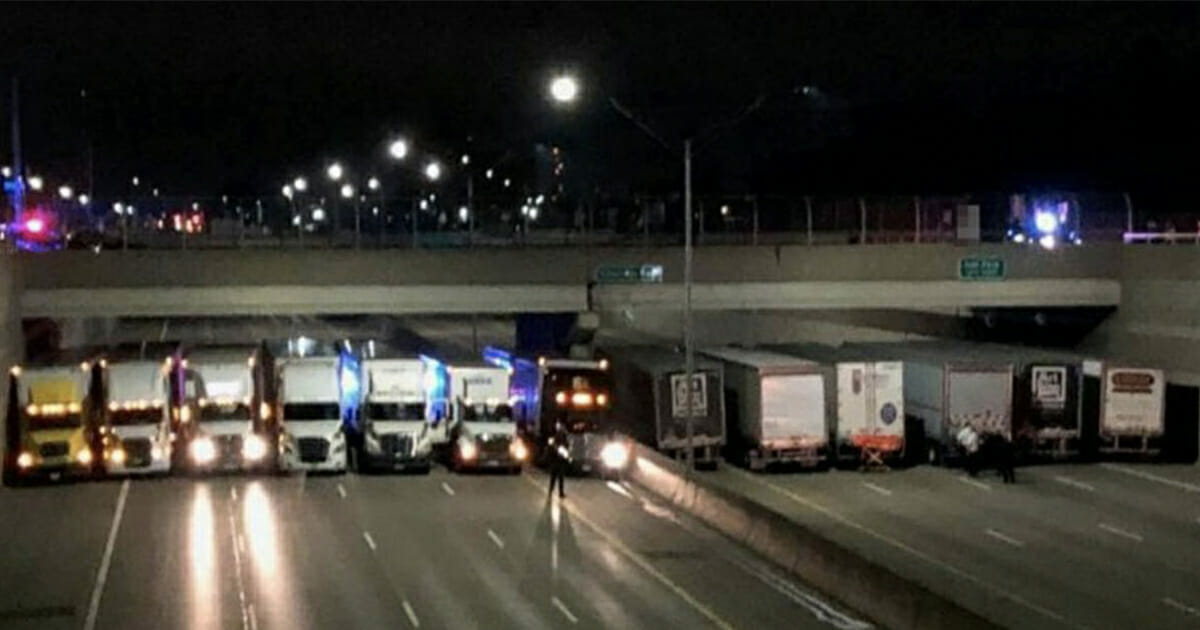 What would you think if you saw 13 tractor trailer trucks parked in the middle of the highway?

If you’d be annoyed, you wouldn’t be alone, because I, for one, don’t like getting stuck in traffic jams, either.

But when I found out why the 13 the truck drivers in this story did what they did, I was in tears.

After receiving instruction from the police, 13 trucks suddenly parked under a bridge on Interstate 696 in Huntington Woods, Michigan in the midwestern United States.

State trooper Michael Shaw had received a call from emergency services and realized he had to act quickly.

He immediately called a traffic cop and asked him to redirect all traffic. But what he did next has people across the globe singing his praises.

Answering a call about a man who was about to jump to his death from a bridge, officer Michael Shaw got a brilliant idea.

He asked a bunch of truck drivers for help, and none of them hesitated even for a second to help.

Thirteen trucks were needed, and after they parked in the middle of the highway, they covered the entire area under the bridge. They made it so the man couldn’t jump all the way to the ground and wouldn’t be able to hurt himself as seriously as he hoped.

Meanwhile, traffic was blocked and redirected to alternative routes.

After four hours, the man gave in and was escorted from the bridge without causing any physical harm to himself. Then he was able to get the help he needed.

The thirteen truck drivers who patiently waited for four hours are proof that there are always people out there who care, even though it might not always feel like there are.

If you or someone you know is feeling depressed or suicidal, there’s always help. For example, you can call the suicide crisis line in your country.

You can also call a loved one, member of the clergy or 911. There are so many people that can help you make the choice to get help and live! It is our hope to never see another photo like this again. pic.twitter.com/cDfm1CK1BZ

Feel free to share this article to pay tribute to officer Michael Shaw and the truck drivers who joined together to help to save the life of a man they didn’t even know!