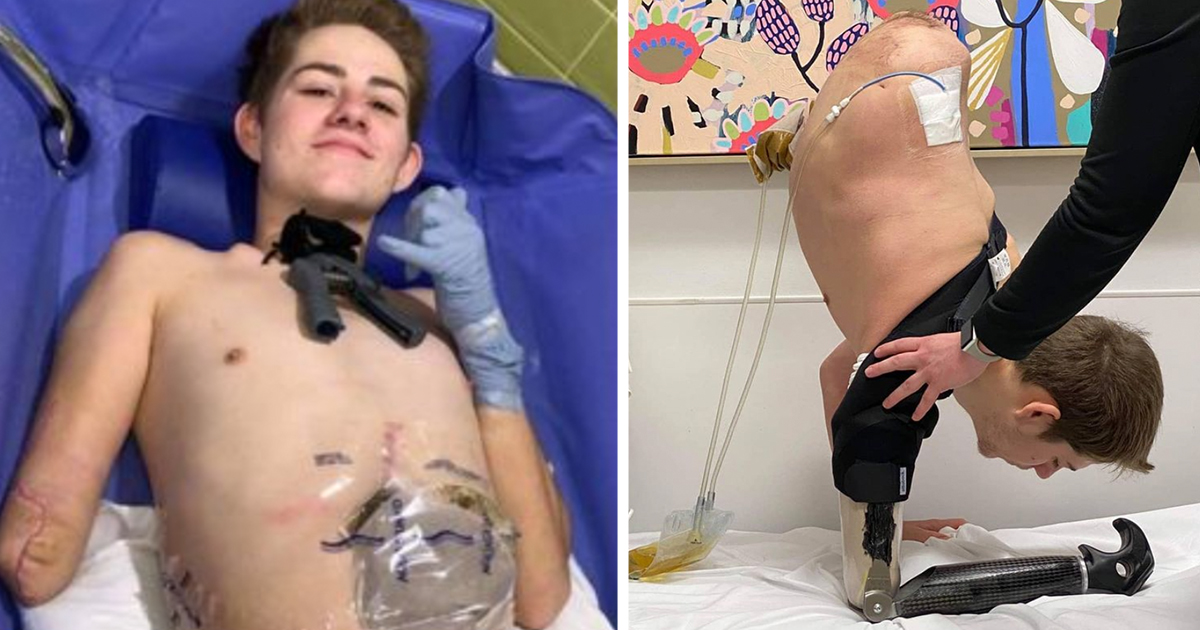 A brave teenager was forced to make the monumental decision to have half his body amputated in order to save his life.

As per reports, 19-year-old Loren Schauers, of Great Falls, Montana, was in the process of driving a forklift truck across a bridge when it fell and plummeted 50-feet to the ground. The teenager was left trapped under the four-ton vehicle.

Loren, conscious the entire time, watched as his right arm was crushed and the bottom half of his body was pinned down by the truck.

As a result of his injuries, the 19-year-old was left with a heartbreaking decision: have the lower half of his body amputated, or face certain death.

His girlfriend, Sabia, said goodbye to Loren six times while he was in hospital. Doctors repeatedly told her he wouldn’t live another day.

And yet he somehow managed to pull through. The pair, who had been together for 18 months at the time of the accident, got engaged to each other earlier this year.

“It wasn’t a hard choice to have half of my body amputated – it was basically a choice of living or dying,” Loren explained.

“With Sabia assuring to stay by my side no matter what and all my immediate family being around me, it really wasn’t a hard choice for me!”

His accident took place back in September, 2019, when Loren was forced to drive along the edge of a bridge to accommodate passing cars. The structure, however, crumbled beneath him, and though he tried to leap free of the truck, his leg got tangled in his seatbelt.

The vehicle rolled three times before landing on top of him, causing extensive injuries. Doctors tried to save his lower extremities, including his right hip, genitalia and left thigh, but his pelvis was simply too crushed. They were also unable to save his sperm.

Girlfriend Sabia explained: “There were many heartfelt, teary, sad conversations within the span of the first month of him being in hospital.

“The first time we said goodbye was before his surgery but he still had his intubator in so he was writing to us as he couldn’t talk.

“The night before his surgery, he wrote ‘I love you’ on a piece of paper as it could have been our last night together. I still have that piece of paper today.

“The doctors would say he was going to die, we’d have a goodbye conversation and then he wouldn’t die.

“It sucked, to put it blatantly, we hated it. His health was teasing us, like ‘haha we’re fine now but going to die soon so you’ll all be sad’, but then he lived.”

The road to recovery

Needless to say, Loren faced a recovery process of epic proportions. Despite it all, though, he retained his will to pull through, and defied doctors’ expectations.

Initially, they had said he would be in hospital for at least 18 months, but he was out after three, including four weeks in rehab.

Of his battles, Loren said: “My best advice to anyone going through something like this is that you can’t focus on the things you can’t have and you must live your life to the fullest with what you do have.”

What a truly inspirational young man. I can only imagine how such a life-altering accident must impact upon someone, and in this respect Loren has proven himself to be brave indeed.

Please, share this article on Facebook to pay tribute to Loren’s astounding resilience, and to wish him well moving forward!